You are here: Products An Echo in the Glen by Michelle Deerwester-Dalrymple 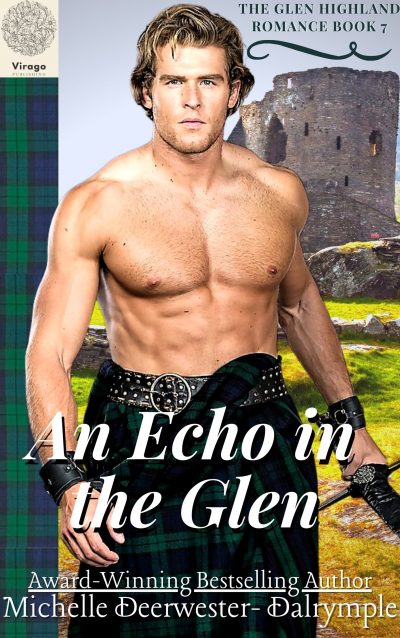 An Echo in the Glen by Michelle Deerwester-Dalrymple

Everything is finally right in Gavin’s world. He’s betrothed to his love, the bold and fair Jenny, hoping to wed come summer.
Until a ghost from Gavin’s past comes back to haunt him. Will Jenny and Gavin’s love be torn apart by this intruder in their lives?

Michelle is a professor, author, reader, wife, and mom of five.

I have a passion for men in kilts!

When the woman Gavin believed he was to wed had left him to marry the Sheriff of Beauly, he had gone mad — to hear Ewan tell it. The woman had denounced him when he sought her out, and he had returned with Laird Ewan to the keep, a sad and dejected man.
Only Jenny’s soft presence brought him peace, and over time, the callous woman fell from his mind, slowly replaced by elements of Jenny and his sense of belonging with the MacLeods. He had walked though some of the darkest of emotional depths that a man could traverse and survived. He’d come out the other sided harder and jaded — Jenny had seen that well enough when Ewan first wed Meg.
But he had also softened the more he was around Jenny, and Meg and Ewan. The Laird had known Gavin since childhood, and his own sense of dedication and responsibility wouldn’t let Gavin wallow about in that hard place.
And while Gavin could still be hard, defensive of Jenny and of his clan, he had grown more light hearted of the past year. His cinnamon eyes danced and sparkled more, his lips rested in easy smiles, and even his tone when he spoke was jovial. To Jenny, he was the fullest of himself, and she loved him for it.
The noise in the keep rose as did the inhabitants, and Jenny’s musing came to an end. ‘Twas time to rise and see what Elspeth needed for Meg, then hopefully find Gavin and kiss him good day.