You are here: Products Always on My Mind by Andrea Downing 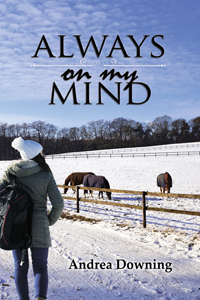 Always on My Mind by Andrea Downing

1972 – Vietnam, the pill, upheaval, hippies.
Wyoming rancher Cooper Byrnes, deeply attached to the land and his way of life, surprises everyone when he falls for vagabond hippie Cassie Halliday. Fascinated and baffled, he cannot comprehend his attraction—or say the words she wants to hear.
Cassie finds Coop intriguingly different. As she keeps house for him and warms his bed at night, she admits to herself she loves him but she misinterprets Coop’s inability to express his feelings.
Parted, each continues to think of the other, but how can either of them reach out to say, “You were ‘always on my mind’?”

Andrea Downing currently divides her time between the canyons of her native New York city streets and the wide-open spaces of Wyoming. Her background in publishing and English Language teaching has transferred into fiction writing, and her love of horses, ranches, rodeo, and just about anything else western, is reflected in her award-winning historical and contemporary western romances.

This story is based on an actual incident of a fight between hippies and ranchers in the Wilson, WY (near Jackson), dancehall in the ’70s. In my book, the ‘70s background instigates a host of problems we would not face today. I think that the current political situation has brought about a resurgence of interest in the ’60s and ‘70s.

He didn’t answer but shoved in another forkful of eggs and studied her. “You do want to go, don’t you? You want to join them? All I’ve heard about is dang San Francisco.”
“I guess.”
“You guess what, for goodness’ sake? Do you or do you not want to go with them?” He tapped the fork three beats by the side of his plate.
“Well, I thought I did. I mean, everyone’s going to San Francisco. Haight-Ashbury. It’s supposed to be where everything’s happening. And you don’t want me.”
“Jeez, Cassie. I’m not the only alternative. Get a job, for goodness’ sake. What was all your college education about anyway? You did go to college, didn’t you?”
“Yeah, but…I went to an all-girls’ college. I don’t think they expected much of us beyond doing secretarial work and becoming wives.”
“So find a husband. I don’t care.” He turned back to his paper.
“I know you don’t care. I don’t expect you to.”
He let his fork clatter to his plate, and his gaze met hers. “Cassie, you’re like…you’re like…” He watched as a tear made its way down one cheek. “Oh, for gosh sake.”
He met her sorry stare across the dinette, eggs congealing in the kitchen warmth. Outside was the screech of tires as a car pulled up, followed by the laughter and clatter of a group of people, sliding doors hitting the metal of the cab, shouts of “Cassie, Cassie, where are youuuuuuuu?”
He pushed back from the table at the same time as she and went to the window to look out. He swiveled to look at her, see her reaction. Then, with a gentle hand, he pushed her toward the back door.
“There you are!” Dave’s voice had a note of happy surprise, which faded as he noticed Coop standing nearby. The boy stumbled as he went to her. “We had to ask that shit Ty where this guy lived and got directions here. Are you okay?”
Cassie faced Coop, her bare feet curling in the dirt in front of the ranch house as he stood on the steps and watched, arm up against a pillar, his own socked feet crossed. Part of him wanted his peace and quiet, his solitude back, but he already knew he would miss her, be sorry to see her go.
She turned back to Dave. “Of course I’m okay. I’m just—”
“Well, get your shoes or whatever and we’ll go off. We should get to Salt Lake City this afternoon and stop there before heading west again.”
“I…”
“She doesn’t want to go with you.” He heard the reluctance in her voice, came down the steps, and stood in front of Dave, challenging. “She’s changed her mind.”
Cassie pivoted to glance at Coop. Surprise mixed with uncertainty faded as a small smile turned up her lips. For a moment, the others were silent, standing there, stupefied. “I…” she began again. “I’m staying here.” She felt bolder, more self-assured.
“You must be joking.” Dave’s shifty glance skimmed from one to the other. “Cassie?”
Needing reassurance, she turned to look at Coop, then turned back to Dave. “I’m fed up with traveling in that bus and I like it here. In Jackson.”
“She’s staying here,” Coop said. “At least for now.”
Perturbed at this news, the other two friends started to turn back toward the bus. Steve drew out a satchel, then scribbled something on a piece of paper before handing both to her. He nodded before he disappeared into the confines of the van.
Dave stood there gawping. “You’re gonna stay here? With this guy? On a ranch? You’re not coming to Frisco?”
She glanced back at Coop for confirmation.
He stayed stock still.
She turned again to Dave. “Yes, that’s right. I’m staying here with Coop on his ranch. I’ll follow along when I’m ready.”
“How you gonna do that? You haven’t any money.”
“I have money. At least some left. When I’m ready I’ll come. It’ll be fine. Honest, Dave. I’ll be along shortly. I’ll hitch.”
Dave’s face folded into a picture of doubtfulness. “I guess it’s your choice, Cassie.” He eyed Coop, then turned back to her. “Just be careful, Cass. Don’t fall for this jerk. He has no real interest in you.”
She stood next to Coop, doubt and insecurity filling her like water flowing into a jug. The VW bus pulled out, friends waving, and she knew she was on her own.
“Now what?” Her voice was just a whisper. “Now what?”