You are here: Products Almost Forgotten by Carey Decevio 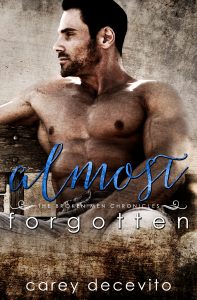 She is the author of The Broken Men Chronicles series.

Chapter 1
I eyed her from across Fairfax, an after-work institution for the upwardly mobile, knowing that in moments, I’d catch her attention. As suspected, while perusing the male population inside the establishment, her gaze froze on me.
I flashed my come hither smile. Some called it a panty remover; others have attested that it made their knees weak. Regardless of its effect, the women I set my sights on wound up vying for my attention in varying degrees. With a rosy tint to her cheeks, this particular one was quick to shift her glance.
I had no doubt that I looked good in my designer Armani, minus the claustrophobic tie I had worn earlier in the day.
As if she couldn’t help herself, her eyes connected with mine, again.
Hook line and sinker.
Turning, I nodded to the bartender and indicated my desire for another drink by twirling the ice in my empty tumbler. It had been one hell of a week and I was in dire need of some down-time.
The sure things in my life since high school have been good money, an abundance of women, and great sex. For the most part, all three came easily enough.
I wasn’t always like this, you know. As with anyone else who leads a somewhat fulfilled yet semi-dysfunctional life, something happened to shape me into the man that I am today. Do I really want to rehash the details with you right now?
No.
Will I?
Stick around and you’ll find out.
As predicted, the feisty-looking redhead donning a black mini dress headed in my direction. I tilted some of my premium scotch back and felt the burn as the liquor slid down my throat.
My cock took notice of the sway to her hips, the length of her slender legs, and the brief but sultry look she’d given me with those bright emerald eyes of hers. I followed her progress with a neutral expression, assessing every bit of the vixen that I could, giving nothing of her effects away.
I wonder if she’s a natural redhead.
She came to a stop beside me, shifting so she faced the bar, but not before giving me another quick once-over and a shy smile.
Boy did I love a wonderful combination of coy and assertive in a woman. And this one pulled it off with perfection.
Noticing the twinkle in her eyes, I knew she held secrets that begged to be discovered under that shy façade of hers. As she licked her red lips, I knew that I could know all of those secrets if I played my cards right. In fact, I was so certain that she would be the cap to the end of my miserable week that I was already playing out how she would look with that sinful mouth of hers wrapped around my cock while I fucked her face.
I swallowed the last of my scotch and turned to her. “Out alone?”
She waited to catch the bartender’s attention and huffed when he once again passed by her for a duo of men at the other end of the bar. “More like ditched. Can’t a girl get a drink around here?” She didn’t seem too disturbed about being left to her own devices, however. “Friend bailed out to spend the night with their boyfriend.”
“Hmm.” I trailed my fingers across the top of her hand which lay on the bar. Goose-bumps spread over her forearm. Swallowing hard, her eyes met mine in brief shock before they cast themselves downward to watch the progress of my digits. “That’s a shame, honey. A beautiful woman like you shouldn’t be left alone. I guess I have her to thank for gaining your company.”
She lifted her head and I saw her cheeks pinken. “It’s him.”
“Excuse me?”
“My friend.” Her lips quirked up. “He ditched me for his boyfriend.”
My jaw dropped at the unexpected announcement and her husky laugh at my reaction told me I hadn’t recovered fast enough from the shock. Her laugh was something else though, as I felt the twitch in my crotch for the second time in under fifteen minutes.
Giving up on her drink request, she turned to face me, looked down again at my playing fingers on her hand before gazing up at me and biting that plump bottom lip of hers.
The wheels were turning in that pretty head of hers. When that sexy grin spread across her face, there was no doubt in my mind on how my evening was going to end. I had her right where I wanted her.
“Can I get you a drink?” I asked, my fingers continuing their trail up her forearm.
“I’d like that.”