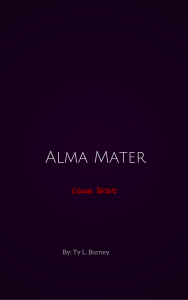 The Main characters, Britney and Simon are currently on a relationship hiatus after their last fight. While on hiatus, Simon starts contemplating on leaving her, because his health seems to have been revitalized, and since he’s separated from Britney, he started having a fling with his other lover. Britney uses her free time apart from Simon to her benefit as well. By managing her underground radical feminist groups, and easing her pent up frustrations by sexually abusing her masochistic submissive, Marcus. A lot of strange things start going on in the college town, and a group of students that are associated with the main characters try to figure out what, in their own special way. As they embark on their discoveries, they encounter life risking discovery after discovery. Until they are able to piece together the whole puzzle before everything finally comes to a head.

Hello my name is Ty L. Burney, I am a 25 year old African American college grad from FAMU, and apart from writing and everyday life, typically I’m your average guy. I can relate to a lot of people, I pay bills, I graduated college, I love to relax and to enjoy the simple things in life. I also like play video games, read, research, watch old cartoons and work out. So in summation, I’m a grown kid.

A vivid dream that I had after I conducted a personal case study about modern relationships.