You are here: Products All the Wrong Places by Jerilee Kaye 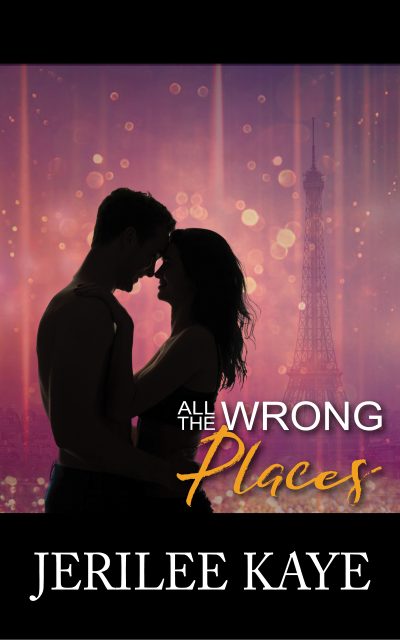 All the Wrong Places by Jerilee Kaye

From Jerilee Kaye, author of best-selling novel “Knight in Shining Suit”, comes the spin-off of the top-grossing interactive story, “All the Wrong Reasons”.

One last adventure.
That was all Julianne wanted. One last trip to escape the pressures of an arranged marriage to a man she doesn’t love and doesn’t even like. One last time to experience freedom… to go wherever she wanted to go, to be anyone she wanted to be. On her last two weeks in Paris, she met someone unexpected—aspiring painter, Jas Mathieu. He was as handsome as hell, and as sweet as heaven. He captured her heart, lit her fire and consumed her soul.She wanted to give Jas every part of herself, but she was already promised to a powerful man who could easily ruin the simple life of the guy she fell in love with.

Terrified of what her father and fiancé could do to Jas if she stayed with him, she fled Paris and left him behind—with no real information about herself, not even her real name. Little did she know, that the passionate night they spent together would be the cause of her broken engagement and would change her life forever.

Seven years later, after her father stripped her of her heiress title and privileges, she crossed paths with Jas Mathieu once again. And this time, she found out that he wasn’t exactly the struggling artist she thought he was. And he was no stranger to the family and social circle she belonged to.It turned out that years ago, when they met… she wasn’t the only one keeping secrets.

Jerilee Kaye was born under the sign of Leo in the year 1979. She graduated with a Bachelor's Degree in Legal Management from De La Salle University. She has post-graduate qualifications in the fields of Product Management, Project Management and Procurement. She is a Certified Senior Professional in Supply Management from NLPA, Pennsylvania and is currently working her way to an MCIPS certification from CIPS UK.

She manages a global supplier portfolio for multi-national and government entities in Dubai and Abu Dhabi. She is also an entrepreneur, managing a photography and printing company with her husband.

She is married to her first love, Sam, who she's been dating since she was 16. They are blessed with two beautiful angels, MarQuise Justine Jerilee and Sir Alfred IV.

When she's not buried under stacks of paper at work, or engrossed with her writing, she spends some down time playing golf, kicking her husband's butt on a judo match and learning to play the piano.

"All the Wrong Reasons" was such a hit on the Chapters Interactive App, receiving at least 3M game plays. Every day, me and my game developers receive requests for a sequel. When I wrote the ATWR, I didn't make it out to be having a sequel. It's a modern day fairy tale, and I ended it with a happily ever after. Now, when the fans asked for a sequel, I had no idea how to follow that up. Although, this story had always had a spin-off. So instead of writing a sequel, I released a spin-off.

"All the Wrong Places" takes us back to the world of Justin Adams and Adrienne Miller (the leads of ATWR), through the love story of Ian Sanders, Justin's only female cousin.
Following the tradition of arranged marriages in the family, Ian also found out she was arranged to be married to a man she didn't know. Before she embraced that fate, she asked for one last adventure. She went to Paris and assumed a different identity. There, she met a wonderful man and fell in love. But since she's already promised to another man, she ran away and left the guy. But it's too late, she found out that she became pregnant from their short encounter. This scandal caused Ian a broken engagement and a banishment from their family.

Seven years later, Ian comes back home to her family. And here, she finds the man she fell in love with, the father of her son. And she found out, she's not a stranger to her family at all. Because when she kept her identity from him, it turns out, so did he.

I cannot really reveal who is this guy. The readers would just have to read that. But I promise them a roller-coaster ride of emotions and another swoon-worthy knight in shining armor!