You are here: Products Alice-Rose by Caitriona Leslie 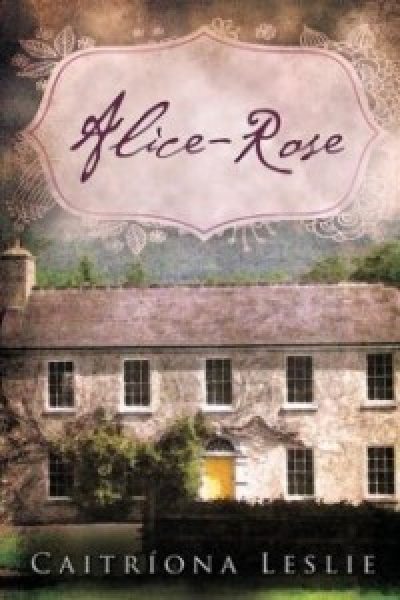 A new romance with an old fashioned feel. Alice-Rose is a gentle modern day love story with very real feeling and warm characters who you want to befriend.

Libby Finn, widow of 3 years, is just about ready to start facing the real world again and when she discovers that Alice-Rose, a local and somewhat dilapidated house, is up for sale she immediately puts in an offer, for Libby has always been a little in love with Alice-Rose and when the purchase of the house involves meeting Dan the local estate agent, Libby starts to fall a little bit in love with him too!

But true love is not an easy path and between organizing the refurbishment of Alice-Rose, planning best friend Jules’ up and coming wedding and dealing with surly builder Paddy, not to mention Dan’s own family problems, the chances to get romance off to a start are few and far between and just when it looks like there might be a way forward something else happens to throw a spanner in the works…..but sometimes love is where you least expect it…..

This is a very warm and genuinely romantic book with likable characters and lovely descriptions of the Irish countryside and the residents in the small country town. I loved the details of Alice-Rose and could see it being put back together in my minds eye. Plenty of humour and a bit of ‘will they, won’t you’ make for a very enjoyable and feel good read.

A great start for a new author.

I grew up in County Westmeath, Ireland. I have a Master’s Degree in Biomedical Sciences and I work part-time in the field of solid organ transplantation. I now live on a farm in County Longford with my husband and our three children.

On the whole, I found the subject matter of ‘Alice-Rose’ very easy to work with for a number of reasons – I am passionate about old houses, I value family highly and I was lucky enough to have a number of close friendships to draw upon for inspiration when it came to writing about the dynamics, and the rewards, of a long-lasting one.

Sample from Book:
It was one of those special, crisp, golden days of autumn. The air was heavy with promise, and I felt the knot of anxious excitement tighten in my stomach. I pushed open the tall cast-iron gates and began the long walk upwards, entirely alone except for bramble, brush, and briar.
I wondered about all the changes that I was sure to find and whether or not that day would deliver Alice-Rose into my future or consign her to the past forever. When courage almost failed me, one thing drove me onwards—the knowledge that a single glimpse of the old house would be enough to reveal whether or not we belonged together.
At last, I rounded the head of the avenue, and I saw it again, dignified and largely unchanged. Time and neglect had not prevailed; the heart of Alice-Rose was waiting for me. It was our time.

Alice-Rose, named after the daughter of the estate’s original owner, was the place of my dreams, and on that morning two years ago, I felt a sense of belonging as strong as if I had been returning to my childhood home. It was the twenty-fifth of October. I remember the date clearly because it was my twenty-ninth birthday, and I was coming from my parents’ house, having started the day there with a family breakfast.
While driving along the boundary wall of the Alice-Rose estate, heading in the direction of Ballyedmond, I saw a man preparing to erect a sign at the entrance up ahead. I was transfixed by the scene. Instinctively, I jammed on the brakes, giving no consideration to safety, my own or anybody else’s. Luckily, the road behind me was clear, and I ground the car safely to a halt some six inches away from the man’s shins. My near victim turned out to be Dan Bryant, a well-known estate agent from the locality.
Although Mr Bryant wasn’t in the first flush of youth by any stretch of the imagination, he was still handsome. Besides his distinguished good looks, Dan Bryant was tall and solid and had all the appearance of someone who was doing well for himself. On that particular day, even while undertaking an exercise that involved no small amount of effort, he was flawlessly turned out in a pinstriped suit and a wool overcoat. I did, at the time, privately question the wisdom of his attire, but ultimately, I was more fascinated by the significance of his task than I was in his choice of clothing. Could it be that Alice-Rose was finally for sale?
‘Is he selling it?’ I asked abruptly, my thoughts spilling out in a way that managed to state the obvious and convey an attitude of absolute rudeness in one simple sentence.
I wasn’t usually so blunt or so unfriendly, and I immediately regretted my approach.
‘Hello,’ Dan Bryant grunted, landing a blow of a sledgehammer to the post. ‘Yes, she’s on the market as of today, and she’s a beauty!’
Despite his exertion, there was fervour in his voice and a little wistfulness, if I hadn’t imagined it.
‘I know,’ I agreed, a little more warmly but with an assurance intended to convey to him that I knew ‘her’ worth.
‘If I was a young man starting out,’ he continued undeterred, ‘I would do all in my power to buy her.’ He spoke with conviction as he prepared to land the post another blow. ‘But,’ he added, ‘she’s a place that needs a young family to bring her back to life.’
He looked directly at me as he said this, and his expression caused me to wonder what exactly he was thinking. Although I felt a momentary twinge of irritation at the personal nature of his comment, I was far too interested in the sale of Alice-Rose, to allow his unsolicited opinions to distract me from my quest.
‘I must see her again,’ I said, leaving Dan Bryant to his own assessment of what Alice-Rose might, or might not, need.
My heart was beating fast, and my head was buzzing as I tried to do the math, but deep down I felt certain that I was in a position to buy the place. I marched with determination up the curving avenue, diligently ignoring the butterflies dancing in my stomach. The lawns on either side were overgrown and tangled with grass and brambles so that the tall and ancient oaks appeared to scarcely have trunks. The very course that I stood on was growing narrower by the day as its borders threatened to engulf it. The post and rail fencing beyond the knotted mass of vegetation was broken and sagging and had the verdant hue of moss and mould. It was difficult to reconcile the shabbiness and neglect that lay before me then with the Alice-Rose of my childhood.
As I walked on and witnessed further the prevalence of nature that without intervention would eventually return Alice-Rose to an uncombed wilderness, I became filled with an even greater determination to succeed in my mission to buy it. When, at last, I rounded the curve of the avenue that brought face-to-face with the limestone beauty of the great house, I stood and looked for all of two seconds before turning on my heel to beat a hasty retreat.

Starting up towards the house again with Dan Bryant by my side, I anticipated viewing Alice-Rose with renewed hope. I observed undeterred the neglect and decay that had befallen her with the passing of time. These things paled into insignificance when compared to the brilliance of sheer blue sunshine filtered through the branches of a giant oak or the glimpse of a perfectly rounded porthole on the gable end of a cut-stone barn.