You are here: Products Alexei: A Mafia Love Story by R.E. Saxton 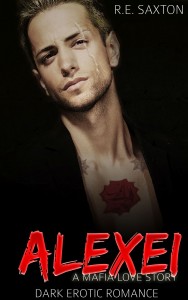 Available at an introductory price of $0.99 for a limited time.

Ordinary Tara Noland leads a boring existence until she sees something she was never meant to observe. Head of the Russian mafia in his city, Alexei Varnakov can’t let her go after she witnesses him murdering an underling. He should follow the code of the vory v zakone and eliminate her, but he can’t. Instead, he decides to keep the fiery redhead. It’s the only way she can stay alive, but she’s defiant and fights him at every turn. He can break his little fox with passion, but can he ever win her trust?

This is a full-length short novel of approximately 50,000 words with a happy ending and no cliffhangers.

Be the first to review “Alexei: A Mafia Love Story by R.E. Saxton” Cancel reply