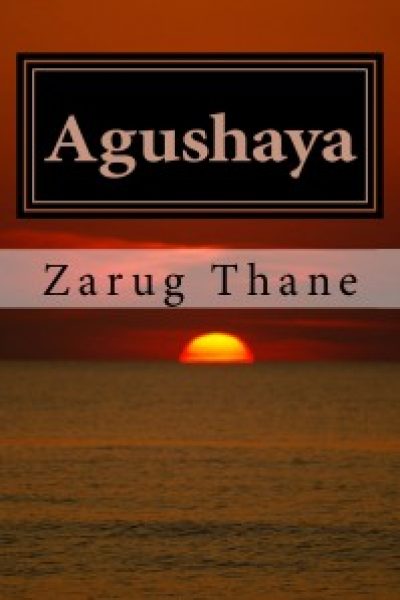 Warning: For Adults Only. Contains unnecessarily graphic and arguably gratuitous sexual material. HLGBT with elements of light dominance and discipline.

Sent to earth to spread the fame of Lord Nergal, Agushaya is hampered by her mortal body, which has been infected with an unduly amorous disposition. To compound her difficulties, she soon finds herself indebted to the depraved-but-cute wizard, Seth. Accompanied by the muscular but submissive Ragnar and the shy concubine Zoar, Agushaya and Seth travel through a post-apocalyptic landscape, battling bandits and riding fusion-powered riverboats, searching for an artifact of unmentionable power.

Once they were out of sight behind what had once been the town saloon, Agushaya let go of Seth’s arm and stood, glar-ing at him.
“You must learn when to stop,” she said.
“Is that why you’re mad? Because I went too far?”
His smirk had returned, but she refused to let it dis-tract her.
“Yes!” she said.
“You’re not mad because I saw what Zoar needed better than you?”
“Perhaps I saw how close Ragnar came to stopping you, when you decided to spank her.”
“And so we learned something. Ragnar is protective. And Zoar gets off being spanked.”
“This is what you set out to learn?”
“Well…. I made them more comfortable with each other. You have to give me that, at least.”
“I was the one making them more comfortable, before you interfered.”
“That’s what you set out to do, make them more com-fortable?”
Seth raised an eyebrow, which made Agushaya’s ears grow warm, because she’d focused on being wicked. Even so, she’d given up chiding Zoar after the first attempt, see-ing that the other woman wasn’t strong enough for such things yet.
“I know where to stop,” Agushaya said. “Which you don’t.”
“I went too far?”
“In spanking Zoar. And … and in fondling Ragnar, which I already warned you about. To shame him like that, especially in front of Zoar and me.”
“And you two weren’t shaming him, with me stand-ing right there?”
Agushaya’s understanding of human nature remained too weak for her to speak with certainty. It seemed obvious Seth had overstepped. But then, sometimes obvious things proved false. He’d been right about Zoar’s attraction to Ragnar, after all.
“Were we harming him?” Agushaya said.
“He was eating it up.”
Grateful that Seth had given her a serious answer for once, Agushaya felt herself soften toward him. Though he’d walked close to the edge of disaster with Zoar and Ragnar, at least he hadn’t fallen off. Yet.
“Just be careful you know when to stop,” Agushaya said.
Seth turned and bent over, presenting his bottom to her.
“Have I been bad, mistress?” he said.
Calling his bluff, Agushaya spanked him, swinging harder than she should have, knocking Seth to his knees.
“I’m sorry,” she said.
Seth rubbed his bottom dramatically as he got to his feet, then stood looking at Agushaya, smirking as usual, showing no sign of being angry.
“What?” she said.
“It didn’t work like it does with Ragnar, did it.”
“You aren’t Ragnar,” Agushaya said. “This is plain enough.”
“But more plain is that spanking isn’t right for me.”
When Seth caressed her cheek with the backs of his fingers, Agushaya felt the caress between her legs as well.
“And now you think to spank me, is it?” she said.
“Yes.”
Agushaya hugged him and nuzzled the side of his face. “I want you to do something else with me.”
“You deny that you’ve been naughty?”
Annoyed that Seth ignored her offer, Agushaya backed up to look into his face, loving the sprinkle of freck-les across his nose, the green of his eyes.
“Tell me you’ve been good,” he said, “and we can skip the spanking.”
Pride made Agushaya want to say that she’d been good, that she didn’t need a spanking. But she thought of how she’d tormented not only Ragnar but Zoar too. How she’d scolded Zoar for touching Ragnar while they rode. Still, those things made Zoar more confident with Ragnar, with the wickedness merely a side benefit.
“I don’t need a spanking,” Agushaya said.
Seth’s his eyes grew stern, reminding her of Master Sing, her fighting instructor.
“No?” Seth said.
What Agushaya wanted was for Seth to mount her, to give her release from the aching need inside her. A spank-ing didn’t frighten her, it just meant still more delay in get-ting what she really needed. Except that perhaps her fib would make Seth not want to mount her at all.
“Very well,” she said. “Spank me then, if it makes you happy.”
“Bend over,” Seth said quietly.
Agushaya did as he demanded, feeling ridiculous. How did they reach this point? Weren’t they partners in an agreement? What put him in charge? Never mind. She would take his spanking in silence, and that would be the end of it. He would see it didn’t work with her, any more than it did with him. He would become bored, and they could move on to the thing she did need.
Seth’s belt buckle made a metallic clink. Leather slid over the cloth of his pants. He positioned himself beside her. A moment later, the leather strap struck her buttocks, leaving behind a muted stinging. But alongside the pain, Agushaya felt a new glow of excitement between her legs as well.
“No,” Seth said, as if testing a wine. “It won’t do…. Take down your pants.”

Be the first to review “Agushaya: Priestess of Nergal Book 1 by Zarug Thane @ZarugThane” Cancel reply