You are here: Products AGENTS UNDER FIRE by Dana Marton 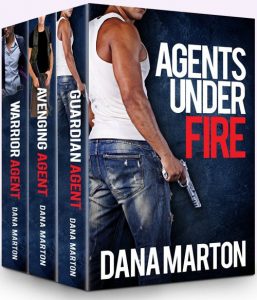 AGENTS UNDER FIRE by Dana Marton

Add a secret FBI mission and a corrupt politician who wants them all dead, and watch the fireworks erupt. (Or is that gunfire?)

A team that fights together sleeps together? Well, not ALL together.

Having lived around the world, Dana currently creates her compelling stories in a small and lovely little town in Pennsylvania. The fictional town of her bestselling Broslin Creek series is based on her real life home where she fights her addictions to reading, garage sales, coffee and chocolate. If you know a good twelve-step program to help her with any of that, she’d be interested in hearing about it! 🙂

Troy pulled into cover and folded into a low crouch, the scars on his face hidden under camo paint tonight. He signaled to Gabe, pointing west, and disappeared from sight in three seconds flat, moving with purpose.
He didn’t look like he had any trouble with hunting Tekla either. Then again, he hadn’t personally known the target. Roughly twenty-five hundred active duty SEALs served at any given time. It wasn’t as if they all knew each other and were best buddies.
Gabe looked after Troy, then stole off in the opposite direction.
Dormers, chimneys, and ridges blocked visibility. Clouds began drifting across the moon. None of that bothered him. Compared to some of the ops he’d been on overseas, this was a walk in the park.
Scan. Move forward. Take cover. Repeat.
He enjoyed a good night game of hide-and-seek, made more challenging by the fact that the ramshackle roof could open up under his feet any minute. He had to watch where he stepped. Nothing new there. The constant IED threat in Afghanistan and Iraq had taught him how to walk with care.
Then he stole around a dormer and spotted the target at last, so he stopped moving. He barely even drew air.
Jake Tekla blended into the night in black fatigues similar to Gabe’s, black ski mask in place. He was much slighter than Gabe remembered. Being on the run had taken its toll on the guy. Had he been sick? Injured?
He wasn’t injured now. He crept toward the edge of the roof as smoothly as a cat, his focus on the jump he was considering.
No visible weapons.
Yet another thing that didn’t add up tonight. Tekla was a seasoned veteran on the run. No way he’d go anywhere unarmed.
Gabe inched closer, watching for a trap. Come on. Turn. He needed to make positive ID. He wasn’t going to make assumptions, not with a kill order. He moved another step closer, then stopped with his feet apart, SIG raised.
His target sensed him at last and spun around. Froze. And for the first time in his life while on an op, Gabe froze too. Tonight’s luck had run out at last.
He’d definitely seen the curve of a…breast.