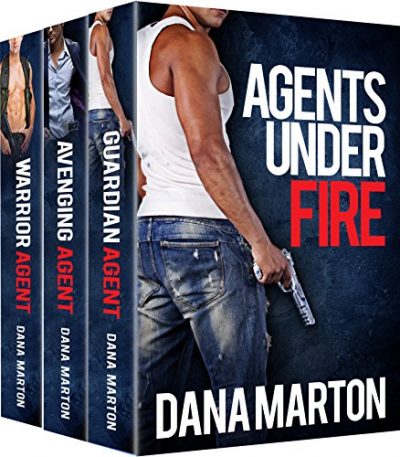 Add a secret FBI mission and a corrupt politician who wants them all dead, and watch the fireworks erupt. (Or is that gunfire?)
A team that fights together sleeps together? Well, not ALL together.
(But—okay, fine—love IS in the air.) (Seriously, these guys are hotter than a fire on a submarine.)

After studying business, Dana began her career in the corporate world, but snapped out of that silliness real fast and went back to college to learn about writing at Seton Hill University and then at Harvard University. She finds that life is much more rewarding when you’re following your passion and doing what you were meant to do. If you have a dream, go for it and don’t look back!

He pressed his lips to her forehead, barely feeling the pain in his knee.

“I’m glad you came.” Her gaze softened. She looked at him as if he was some kind of a hero.

“You have to stop looking at me like that, sweetheart,” he begged, his voice suddenly low.

“Why?” she whispered, her sweet mouth inches from his.

“Because I’m trying hard not to kiss you.”

And then he did, just a slow brush of his lips against hers.

He needed to go easy on her. She’d just been through hell. But then she kissed him back.

He was so damn sunk here.

He kept the kiss civil, when all he wanted was to devour her. Eventually, he was even able to pull back. If he’d ever done anything to deserve a medal, this was it.

He cleared his throat, hoped she wouldn’t notice the sudden tenting in his pants. “I don’t want to take advantage of you here.”

She held his gaze. “Do you think you could take advantage of me somewhere else? Later?”

Her words shorted out his brain. He couldn’t come up with an intelligent thought, let alone coherent words.

Be the first to review “Agents Under Fire: (3-in-1: Guardian Agent, Avenging Agent, Warrior Agent) by Dana Marton” Cancel reply