You are here: Products Afterglow by Jessica Pettis 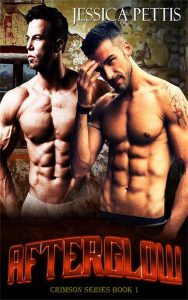 Russ glances at Ennis, and that’s all the warning he gets.
“Run!” Russ barks as he launches himself at the soldier, knocking the rifle to the side. Gunfire rings out simultaneously, and Ennis suddenly staggers, pain searing across his right leg before the ground rushes up to meet him and his lungs forget how to inhale. He can’t stand up, he can’t process why it hurts. But it comes to him. Shot.
He blinks hard, twice, his hand moving of its own accord down to where it hurts. Blood seeps through his jeans and coats his hand when he touches the wound, but it doesn’t look like his hand, he can’t figure out what he’s seeing; instead he looks up and focuses on what he knows. He focuses on Russ, just aware enough to watch him somehow drop the soldier to the ground and smash the rifle into the back of his head. The soldier stops moving, and Russ finally turns around. Ennis sees his eyes widen, taking him all in with a single look.
“Can you stand?” Russ asks, falling into a crouch next to Ennis. Stunned, Ennis can only stare back. There’s fear on that boyish face, but it’s also controlled, like a storm brewing beneath the surface. It’s calming. Ennis hangs onto it as he feels himself getting dragged upright and pulled. Voices, footsteps, and darkness surround him when something is thrown over his head.
In the absence of Russ, he finds that he can’t think. The pain is immense. It’s nothing like he’s ever felt before. Russ is saying something somewhere above him, but it takes an incredible effort to listen to him and far too much effort to comprehend. He realizes almost seamlessly: he doesn’t care enough to try.
It’s quiet in his mind. It’s nice.

Be the first to review “Afterglow by Jessica Pettis” Cancel reply