You are here: Products After Eternity by Ann Sepino 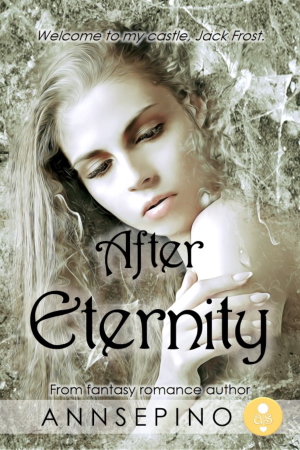 After Eternity by Ann Sepino

Jack Frost is third in line to his brother’s kingdom, and tasked with guarding the children of the mortal realm. Briella Snow is the Snow Queen of the kingdom of Tundra, and rumored to be fond of abducting mortals. When a boy living in the mortal realm goes missing, Jack knows that there could be no other possible culprit.

His suspicions are confirmed when he actually meets Briella. She’s pompous, she’s powerful and she’s an icy cold pain in the neck. Then Jack realizes that her icy facade is just an illusion to keep others from discovering her true motive—securing the safety of the supernatural realm against goblins.

The Snow Queen offers Jack a compromise: she will show him where the boy is in exchange for his helping to misdirect the goblins away from her castle. Both knew they would be risking their lives, not only against the goblins but also each other. What they didn’t expect was that they’d be risking their hearts as well.

(This is a standalone fantasy romance novel inspired by the tale of The Snow Queen and the legend of Jack Frost.)

Ann Sepino is an independent Filipino author who loves all things fantasy romance. She enjoys creating the perfect happily ever after for her knights-in-distress and damsels-in-shining-armor. Her inspiration comes from the fairy tales and folklore of her childhood, as well as her interest and experience with local culture. One of her best titles, 'Tribeless,' was influenced by these very elements.

I've always been a big fan of fairy tales, including those by Hans Christian Andersen. I also love learning about folkloric and mythological figures from around the world. I used these preferences for crafting 'After Eternity,' as well as my other fantasy romance novels.

She could tell that her challenge was interesting him at the moment. Why wouldn't it? She was practically handing him an opportunity to shake off some heat. Not to mention she'd promised to show him where the village boy actually was if he helped. He was probably thanking his lucky stars that this unfortunate circumstance had befallen the great Snow Queen.

"You flatter me, Your Icyness." Jack Frost raised his hand in the air. He curled his fingers, and from the space between them formed a column of ice. He was fashioning from thin air the magical staff he used to control his powers. "Could it be that, deep inside, you're trembling in fear?"

Frost kicked his staff into the air, where it hovered like a low-lying cloud or a witch's broomstick. He wasted no time in hopping onto it. And truth be told, Briella was duly impressed with his little display.

Although he didn't need to know that. "Oh please. Trembling in your arms is the least probable thing that will ever happen to me."

"Careful there, Snow Queen." He smirked, totally unaffected by her direct letdown. "Hurt my feelings and I might not offer you a ride over to the battlefield."

"Who says I need you to offer me a ride, Frosty?" Briella replied as she ducked beneath his hovering self to get to the other side.

There was a rather huge pile of snow at the east side of the courtyard. Briella headed to it, one hand outstretched and loaded with the power she was channeling. She placed her ungloved palm—pretty much immune to the cold—directly over the white heap. The snow pile rumbled. It shook violently, and some chunks of snow began falling off from various sections.

Briella watched as the falling chunks, little by little, revealed her creation underneath. Eventually the creature beneath shivered and stood up. A large white bison rose up from the ground, shaking the remaining snow off its back and hide. Briella carefully climbed onto the bison's back. Of course, it was easier wearing her tea-length riding skirt. "A wonderfully warm, nifty creation, isn't he Mr. Frost?"