You are here: Products Across Time by Jeff Fuell 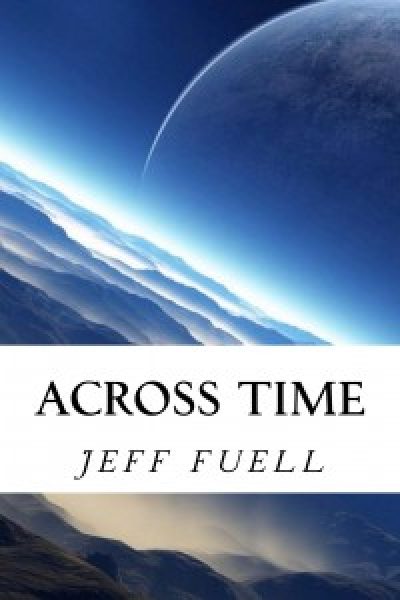 Across Time by Jeff Fuell

A time travel story that will stay with you forever… True love and friendship has no boundaries, even across time. Christopher and Susan are two teens who are best friends – one a talented guitarist with dreams of attending Julliard and the other a talented young writer who accidentally travel back to the year 1963. There they fall deeply in love and have to make a decision; do they stay with those they love and care about or return home while they still have a chance? But if only one of them returns, how will that change the timeline? Will their entire lives be changed for the better or for the worse? Will their dreams still come true? And will they meet up together later in time?

From the author: Books come about in different ways. For this book the first thing that came to mind was the ending – two teenagers go on a time travel adventure and only one of them returns to their own time and they meet up again, one of them now obviously decades older. That was it. A week later the rest of the idea popped into my head one day out of the blue and I had my story. I knew who these characters were, what their goals were, everything. One of my favorite movies is “Somewhere in Time,” which is another time travel story. I wanted to try and capture the magic and emotion of that movie in this book. Hopefully, I have succeeded.

I had the idea for the ending before anything. The rest of the story came later. I love time travel stories and I wanted to write a beautiful, emotional story filled with humor and love.

Sitting in the air about thirty feet away from them in Ronald’s front yard was the Circle, crackling with energy, the familiar void inside of it a constant swirl of motion.
Christopher immediately turned to Susan and she was looking at him with fear. No, fear was not the right word. Hurt. The look of hurt in her eyes almost made him feel the same way. He didn’t want to leave either But he had to. THEY had to. This might be their only chance to get back home and it might never come again. The decision had to be made now, this instant.
“Susan…?”
“I know,” she said as she slowly turned to Ronald. “I have to go,” she said beginning to cry.
“I wish you could stay.” He couldn’t hold back the tears either.
“I want to. I love you.”
“I love you, too,” he said as he embraced her and held her tightly.
Christopher turned his attention to Jennifer, who was already crying because she knew that they were going to leave.
“I wish you could come with us,” he said.
“I wish I could go with you. So, so, much. But, my mother, my brother…”
“I know,” he said as he hugged her.
“Thank you for being so kind to me. I’ll never forget you.”
“I’ll never forget you,” he said choked with emotion as he gave her one last, long kiss and then slowly pulled away from her. “Susan?”
“I’m ready,” she said as she parted from Ronald and started wiping her eyes.
“Ronald,” it’s been an honor,” Christopher said as he held out his hand.
“Honor’s been all mine, mate,” he said as he took his hand, and then they hugged.
“Maybe we’ll see each other again sometime?”
“You can bet on it, mate.”
They finally parted and Christopher looked at Susan who was standing there watching them.
“Are you ready?”
“Yes.”
“Let’s go, then,” he said as he took her hand and then turned his attention to Jennifer one last time. He raised his other hand and placed it gently on her cheek and let if stay there for a second as they stared into each others’ eyes. He then quickly turned away. “Let’s go,” he said through his tears. They both ran for the Circle and jumped in. They turned back and saw Ronald and Jennifer staring at them and waving, tears flowing down Jennifer’s cheeks. They both waved back and waited for whatever was going to happen to happen.
Suddenly, Susan jumped from the inside of the Circle and ran towards Ronald.
“Susan!” Christopher yelled.
She embraced him and they held each other tightly.
“Susan!” he yelled loudly. He tried to exit the Circle, but something invisible was blocking him. His hands seemed to be pressing against some kind of transparent barrier that he couldn’t see and he wasn’t able to run after her. “Susan! Come back!”
She looked back at him with a loving smile on her face and Christopher knew right then and there that she had made her decision. The only decision that she was ever going to make.
“Susan! No!” he pleaded. “Come back!”
The last thing he saw was her waving at him with a smile of love and contentment on her face.
And then she was gone.