You are here: Products Ache for Austin by Sharon Love 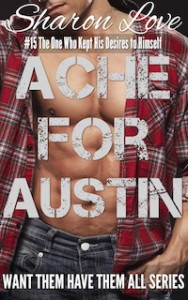 Ache for Austin by Sharon Love

Austin is one of those men women ache to be near and the little sister of his high school friend is no different. Amber longs to be close to him even if it is under false pretenses.

Austin’s a toucher, flirtatious even. He’s always there offering a hug, lingering his hand on a woman’s knee and winking with a suggestive smile.

How could Amber resist him? She almost didn’t right before she moved away for ten years. Her high school reunion brought her back in town. She could no longer ignore the repressed desires teenage Amber had for Austin. She takes him to the reunion and discovers the desires he kept to himself for too long.

Want Them Have Them All Series
#15 The One Who Kept His Desires to Himself
Ache for Austin
By Sharon Love
It’d been a few months since my last trip home. This time it was Easter weekend. One foot in the door, mom handed me an invitation, it was for my high school reunion. Had it really been ten years since I’d graduated?
Most of my high school friends hadn’t changed. We didn’t live in a small town, far from it, there were four hundred in my graduating class, but the way we all kept in touch, it felt like it was a small town.
Everyone was in everyone else’s business. All the time. We all still stayed over at each other’s houses, ate dinner with the other’s parents, and acted as life hadn’t changed.
So late Thursday after a four hour drive when I arrived home I wasn’t surprised to see Austin sitting on the porch smoking with my dad. I know smoking’s a bad habit, but Austin was cordial about it. He only smoked in the car, outside, or at a bar. He never lit up chilling on the sofa watching television.
I have to stop here and tell you a little more about Austin. Damn he’s my kind of man. His sensual eyes bore into me, he always had a five o’clock shadow and his voice. Oh his voice. So deep and tender, always adding a Darlin’ or Hon to the end of every sentence. He really boiled my juices good, but I never felt like I was anything more than a little sister to him.
He started coming around the house after high school, after my brother had gone away to college and after he’d broken up with his steady girlfriend. My mom was tough on him for letting her go, but she let him take over the yard duties, my brother left undone.
I had one summer out by the pool with Austin before I left for college myself. That was the hottest summer on record at my house. Austin, a bit of a job hopper, always learning a new trade had become a pool cleaner that year.
After making his rounds, he took his last dip in ours. Tan, sweaty and ready for a beer. I waited for him every day on the lounger in my swimsuit.
“You’re positively a lobster.” He poked my red shoulders. I never did tan, only burnt and freckled. “Get in the water.” He took a long drink and dove off the diving board into the pool with a splash.
I picked up his beer, and met him at the steps. Lowering myself in the cool water I arched my back, keeping my tits just above the surface, waiting for him to emerge so he could get a good look at them.
When he did, he flipped his barely long enough hair back and slick it smooth. Then he paddled over and took the beer. “How you been Darlin’?”
We sat on the steps together. I mumbled out something stupid about the neighbor kids which I babysat to make extra money and my worries about leaving home.
“That’s nice. Sure glad to hear it.”
He patted my knee, which sent all focus of my being to his hand on my skin. Each time he touched me I wanted more. I wanted him to slide his hand up my thigh and explore where he shouldn’t. But he didn’t.
“Come on. Take a lap with me.” He shoved off from the steps and swam to the deep end.
Using the side, he pulled himself up and out of the pool. His shorts dropped down a bit, teasing me with an inch of his untanned ass. Oh what I wouldn’t give to see all of his bare essentials.