You are here: Products Accidental Tryst by Mia London 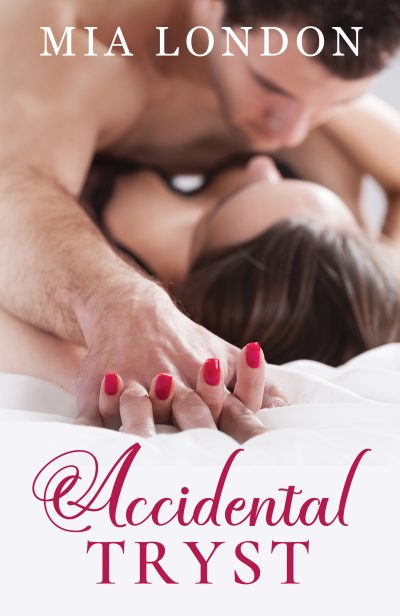 “Passion, betrayal, lust, forgiveness–Accidental Tryst has it all! And did I mention it’s hot, hot, hot? A terrific read I couldn’t put down, I highly recommend this book. And you might want to make sure your romantic significant other is close by when you finish this steamy hot read…another winner from the pen of Mia London!” ~ Cindy Dees, NYT and USA Today bestselling author

So much for the American Dream. After twenty years of marriage, successful careers, and two teenage boys, Angie and Mac’s relationship dissolves into disappointment and resentment. Overworked and underappreciated, the toll of their problems fizzles their dream of happily ever after.

Smacked in the face with failure, Steve “Mac” MacKey refuses to give up so easily, and strategizes how to win back his wife. So a plan to confront her by leveraging the boys backfires on him. In the most wonderfully unexpected way.

Angie’s misery in marriage is topped only by her misery without Mac. When she confronts Mac in his office, she learns just how fine that line is between lust and anger. And when she thought her husband couldn’t care any less about her, he sparked a new fire inside her she didn’t know existed . . . that felt so damn good.
Sex may not solve everything, and it’s a far cry from making any real changes, or fixing her emotional rollercoaster.
Can they last that ride long enough to save their marriage, or are their rifts and broken promises too deep to cross?

I love to write!

I've been reading fiction for years and finally decided that the images and scenes floating around in my head needed to make it to paper.

I'm a huge fan of romance, highly optimistic, and wildly faithful to the HEA (happily ever after). I'm inspired by most anything around me. And my biggest obstacle is not having enough time to get it all down on paper (or my computer, as the case may be).

My goal is create a fantasy you will enjoy with characters you could love.

I live in Texas with my attentive, loving, super-model husband, and my perfectly behaved, brilliant children. My produce never wilts, there are no weeds in my flowerbeds, and chocolate is my favorite food group.
And then I wake up.

This is my 11th book and 3 years in the making. I would have to shelf it to work on other projects, but I always came back. Slowly, the story evolved and I absolutely love it. I hope you enjoy it as much as I do.

Angie fumed. This must have been what Terri referred to as getting ugly. How dare Mac think he could keep the boys all summer, every summer. That news had been relayed to her that morning by her attorney. And Angie would not go back through her divorce lawyer. Oh no. She would handle this one directly.
She stomped off the elevator, her steps determined and sure. She debated blowing past his admin, but opted for professionalism instead. “Mimi, is my husband available?”
“Hi, Mrs. MacKey. Hang on. I’ll check.” The bubbly thirty-something woman picked up the phone and buzzed Mac.
Angie worked her jaw to unclench her teeth.
“He said to go right in.”
Angie strode around Mimi’s cubicle and pushed open the thick wooden door. She’d been to his new office only one other time, right after his promotion. The bookshelves were stacked with books, sales awards, a few momentous, and few pictures of her and the boys.
“Hey, Angie. What’s up?” Mac said casually as he stood and rounded his impressive mahogany desk.
She closed the door behind her. Her eyes narrowed. “You know what’s up, Mac,” she uttered in a stern voice, deeper than she’d intended.
“Oh, is this about having the boys for the summer?”
He damn-well knew what this was about. He was toying with her. “Of course, it is. Why the hell else would I bother to come all the way downtown?” Her tone escalated.
He took three steps closer to her. She knew it was meant to intimidate, but she didn’t move a muscle. “Look,” he said, “you get the boys most of the time anyway. Now you can have your summers free.”
Oh sure. He was thinking of her. Not freakin’ likely. “You travel all the time.” Well, used to. “How exactly is this beneficial for the boys? You think they’ll enjoy just sitting around in your apartment all summer?”
He scoffed. “They will not.”
“Of course they will.”
“Oh, don’t act like such a bitch,” he growled.
Before anyone even saw it coming, Angie raised her right hand and sent it flying across Mac’s cheek. The sound of the slap reverberated through the whole office. His cheek instantly reddened.
Her hands flew up over her gaping mouth and her eyes widened. Never in their years together had she ever hit him. There had never been violence. She’d rarely hit the boys growing up either, choosing other forms of discipline instead.
“Oh, crap. I’m sorry, Mac. I didn’t mean to do that,” she said behind cupped hands. “Oh, my God. I’m so sorry.”
He stared at her for what felt like an eternity. She could see the fire in his eyes. He took a step closer, and she stepped back. Her back was now almost touching the door.
“No, you’re not,” he said, his voice low and menacing.
“Yes, Mac. I . . . I lost my head. I didn’t mean to slap you.”
“Prove it.”
Confused, her eyebrows pinched together. “What? What do you mean? How?”
He reached beside her and locked his office door. “Prove it,” he said again, but his voice sounded more hoarse and . . . lustful than before. He kept his eyes trained on hers.
She licked her lips and squirmed ever so slightly.
She didn’t ask again, and Mac didn’t wait. He simply pointed to his desk, the other hand on his hip, looking authoritative. Sexy and masculine. “Hands on my desk.”
Angie had never seen this side of her husband before. Perhaps she should be scared, but in fact, his dominance only fueled her from the inside out. Her nether parts came alive. She wasn’t exactly sure what he had planned, although she had a reasonably good idea. “What?” she sounded like a timid mouse, her question a bit too breathy.
Without giving her any more time to stall, he wrapped his muscular arm around her waist and hauled her up against his body. His very rock hard body. Oh my!
“I said, put your hands on my desk. I’m going to spank that delicious ass of yours and that will show me just how sorry you are for slapping me,” he spoke against her cheek. His warm breath sent a shudder through her. She shouldn’t like this so much.
Then he let her go. Surprisingly, she maintained her balance. To do or not to do? She eyed him, then the desk. She bit her lip, and without any conscious thought, her legs moved, carrying her to the desk on their own volition.
Mac moved close behind. She stopped. He gently pushed against her mid-back, and bending at her waist, she placed her hands flat on his desk. He stepped closer to her, his erection digging into her hip. He whispered in her ear, “Look at this very fine ass leaning over my desk.”
Words escaped her. Her brain could not function at a level high enough for her to mutter anything. He caressed a big, warm hand over her ass. Circling and circling. Then he pulled back and let his hand fly.