You are here: Products Abandoned Honor by Deborah Tadema 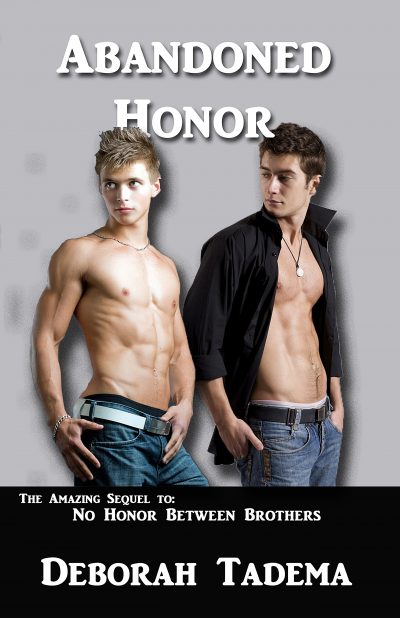 Suffering from hopelessness is hard enough for Mitch Wilder to contend with. Remembering to take his medication is a chore. Keeping on top of his secrets and lies is nearly impossible since he’s been diagnosed with manic depression. And living three different lives is starting to crash down upon him.

Mark Wilder is Mitch’s only legitimate son. After his mother’s second husband dies, Mark begins to hope that his parents will re-unite. If they do, then maybe his father will stick around more. But the only re-uniting they are doing is in the bedroom. Neither one seems to want anything more than that.
Mark worries about what his parents will do when they discover his own secret. That him dating Naomi Palmer is a ruse. And that all he wants to do is run around naked…with her brother.

This is my third book, the second one in a series. I grew up in Port Stanley, Ontario and enjoyed swimming in Lake Erie. Today I live in the country near Bayfield.

Once I got started on this story I wanted to see how far I could stretch it. To keep characters going and to see what trouble they can get into.