You are here: Products Aaji – My Grandmother by Suyash Bhardwaj 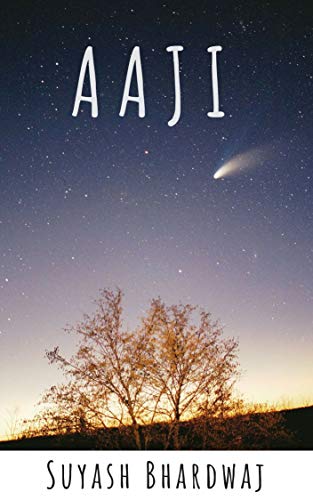 Aaji – My Grandmother by Suyash Bhardwaj

“Do you know what true love is Aaji?” asked Shumi.

On a summer evening, Shumi asks her grandma whether true love exists. The Grandmother amused by her question narrates an unbelievable story of Shanaya, a young village girl, who meets a boy in the most unimaginable place and her life totally changes when a comet returns after 75 years.

Aaji is a cross generational supernatural story about Shanaya and her adventures.

Will she find out about the village ghost?
Who is the boy with blue eyes?
Will Shanaya find her true love?

I am a civil engineer by trade but a writer by habit. I believe people call it passion these days. When I do not write, you can find me cycling, watching Arsenal on Premier League, jump rope and reading non fiction books. You can follow me on my blog where I write weekly articles and opinions. Follow me on website soch-world.com

The original idea of the story was not at all the final product. I had something in mind but I feel the strength of the story overcame my idea and dictated my sense as if the story was writing itself in order to reveal it to the world. I would say the story was always there in the void and used me as a means to express itself.

Once upon a time there lived a young girl in a small village. There were enormous cotton fields and cotton production was the major occupation of the villagers. She was the little girl of a middle class farmer in her village. She had restricted opportunity as she was born in an orthodox family. Her routine was typical for a 15-year-old young village girl. She woke up early, helped her father with organizing his farming tools and apparatus required, helped her mother with household chores, go to school and play with her friends, return home to assist her mother with her tasks, tuned in to the radio and go back to sleep. There was nothing out of ordinary in her life barring the ghost house. Her primary school was at a walking distance from her home. She had to walk alongside the river to reach the bridge which meets an adjoining road. She walks along the road passing the village temple, shopping center, residential houses and open lands used as playgrounds. The street forks into two ways, one which heads back to her house and other to the highest point of a hill from where everything can be seen. She always passes by a haggard and charred house which once belonged to an affluent zamindar. She generally watched the house and its poor condition with interest. The legends spinning around the house were widespread in the village. She was strictly warned by her parents to not enter the premises of that ghost house. As per a legend, the zamindar had lost everything in a bet. This made him frantic. Zamindar had a wonderful spouse and a young teenage boy. After a fight with her wife, the zamindar lost his temper and stabbed her with a knife. The young boy was the witness. Having lost all his wits, the Zamindar killed his young child, buried them in the backyard, set the house ablaze and left. Since that day, it is believed that the ghost of the young child lives in the house few professing to hear eerie voice. Another legend speaks of his wife who had committed infidelity and their child was not their own. Zamindar confronted her wife and in rage set the house ablaze with her wife and child bolted inside the house. Numerous legends have a different adaptation of how the Zamindar beaten his wife, set fire to his home and left the town. The residents believed the house to be cursed. According to the locals, there were numerous episodes and sightings of a ghost. The land couldn't be reestablished. Following a couple of years, a farmer purchased the land at an extremely modest cost. He wanted to demolish the scorched house however he failed to do so. Diminished pay because of terrible yields in all his farm after purchasing that cursed land, made the farmer incapable and demolishers reluctant to enter the possessed land led the farmer to desert the property and never to return. To this day, the villagers have never entered the abandoned land of the coldblooded Zamindar. To protect the locals from the malicious impact of the ghost and the cursed land, a prayer function on a full moon night in the village temple is held every year. All the children from the village were gathered to perform a ritual. The young girl never trusted the neighborhood legends and thought they were manufactured for fun of the locals to make their own life fascinating. She watched the charred house from far off. It made her inquisitive and wanted to prove that the legends spread by the locals aren't right. How much so ever she wanted to debunk the legends, she was very much aware of the consequences of her activities and never set out to stage a foot inside the premises of the burned house. Her life was very stale and dull with nothing interesting to occur, but she was content with it. She returned to her home, finished her daily errands and rested. She neglected to turn off the radio. There was a news broadcast that a comet would go by Earth in a months’ time. It was proclaimed as the most important galactic occurrence of our generation. This comet was seen 75 years back. She could have never anticipated that the return of a comet would now turn her life upside down.