You are here: Products A Woman, Transformed: A Tale of Supernatural Erotica by Rianne Burnett 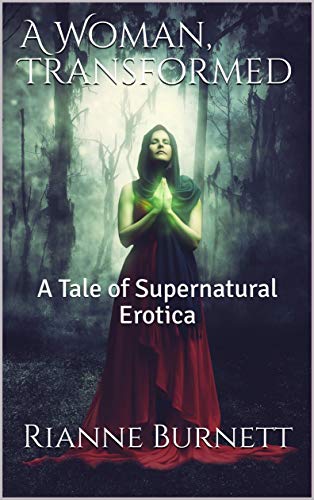 A Woman, Transformed: A Tale of Supernatural Erotica by Rianne Burnett

Gemma Shaw’s life is thrown into a tailspin when she’s attacked by one of her students. She realizes he’s a supernatural creature and her quest to discover which one leads her down a path of self-discovery. While it’s not the life she would have wanted for herself or her family, Gemma must learn how to adjust to her inevitable change. This woman’s transformation takes her down a physical and sexual road she hadn’t expected.

Rianne Burnett loves writing erotica that features women who are willing to explore all aspects of their sexuality. When she isn't thinking about her main characters cavorting with otherworldly creatures, she's tinkering in her garden, reading, or spending time with her family.

With this book, I was interested in delving into the many changes and conflicts that can arise from such a drastic transformation.

“The kids…what should we tell them?” she asked.
“The truth, maybe? I mean they're old enough to understand some version of what's going on.”
She nodded before replying.
“I agree. In the meantime, what do you say about making the best of our time together?”
Tentatively, Gemma reached for Jack’s hand and was relieved when he didn’t back away. Instead, he moved to the centre of the bed while curling his hand around her waist to bring her closer. She took a moment to enjoy his embrace, laying her head on Jack’s shoulder. As his hand dipped under her shirt to caress her side, she lifted her head to gaze into his eyes.
He held her gaze while scraping his fingernails gently against her skin. Gemma slipped her hand behind his neck to draw him in for a kiss. It was halting at first, but soon their combined passion intensified. Jack moaned against her lips and unhooked her bra with a few deft movements. Slowly, he massaged her right breast working his way up to her already hardening nipple.

Be the first to review “A Woman, Transformed: A Tale of Supernatural Erotica by Rianne Burnett” Cancel reply