You are here: Products A Tycoon’s Jewel by Avery Laval 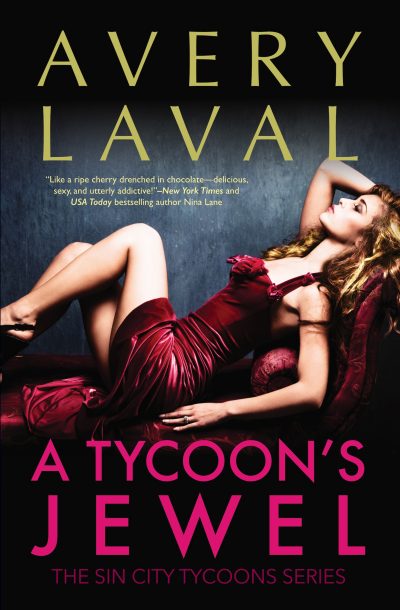 A Tycoon’s Jewel by Avery Laval

How much would you gamble on a second chance at love?

Six years ago, celebutante Jenna McCormick lost it all—her parents, her fortune, and her family’s jewelry company. She built a new life for herself, but when disaster strikes and she needs more money fast, she’s forced to ask the one man she despises most.

Bad boy CEO Grant Blakely stole Jenna’s heart—and her father’s billion-dollar jewelry empire. That was years before, but Jenna has never forgiven him. He’s the last person she would ever ask for help, but now she has no choice. Her brother’s life depends on it.

When Jenna asks Grant for a job, he sees only the spoiled brat she was all those years ago. She’s persuasive though, and still sexy as hell. Fueled by curiosity and revenge, Grant hires her—as his assistant. He thinks she won’t last a day doing his endless lists of menial tasks, but he soon learns that there’s more to Jenna than he ever knew—and this time, she’s not giving up so easily.

When the battle of wills begins, it fans the spark between them into a wildfire—but can Jenna really trust Grant, or is he just out to humiliate her one last time?

Get ready for a thrilling enemies-to-lovers romance—Vegas style.

Avery writes romantic fiction for Blue Crow Books. Her SIN CITY TYCOONS series includes A Tycoon's Jewel, A Tycoon's Rush, A Tycoon's Secret, and A Tycoon's Bargain. A Tycoon's Deception comes out in spring of 2020.

Avery lives in the midwest and teaches creative writing when she's not writing novels. She loves reading, is a sucker for a good love story, and is a die-hard fan of romance.

I've always loved romance novels, and knew I'd end up writing them one day. Now, I write books that have smart heroines, hunky heroes, and a diverse group of characters that reflect the world around us. I've always had a soft spot for billionaire romances, but I like to write heroines that give the hero a run for his money. some of these guys have just had it easy for too long, you know? They need a feisty woman to help them correct their course.

It took a great deal to surprise Grant Blakely. He’d seen a lot of nonsense in his position as CEO of McCormick Jewels, to say nothing of what he’d dealt with as he’d built up a real estate portfolio that covered valuable properties in Las Vegas and beyond. And then there was his father, the true master of surprise. But walking into the waiting room outside his own office and finding the woman he’d wrestled the company away from six years ago, perched on a straight-backed chair and looking out-of-sorts—and yes, really, really good? That was the biggest surprise he’d had in a long time. He paused in the doorway, where he could just watch her for a moment, undetected, and leaned against the doorjamb to take in the sight. Long brown hair fell around her shoulders in pools. She drummed her fingernails on her knees and bounced her heels in and out of a pair of incredibly high-heeled, uncomfortable-looking black stilettos. She’d always been attractive, but in the last six years, she’d become an absolute knockout. She looked nervous, and seriously alluring. Well then. Jenna McCormick, all grown up and sitting in his lobby, shaking like a doe in hunting season. Grant uncrossed his arms, pushed himself away from the door, and cleared his throat as he approached, enjoying the startled look on her face when she realized he’d been watching her.  “Good morning, Ms. McCormick,” he said, smooth as a cat with a smile to match. “To what do I owe this pleasure?” The woman—for she was certainly not the shiny-eyed party girl she’d been the last time they’d met—jumped up out of her chair and spun around to face him. Her large dark eyes opened and shut tight a few times in rapid succession, as if she couldn’t believe he’d snuck up on her. When really, Grant thought, she should have been expecting exactly that, considering their history. He watched with some pleasure as she rearranged her features, hiding her disarmament with a cryptic smile, as though she’d known he was there all along. “Grant Blakely,” she said, extending a hand. “How nice to see you. It’s been a long time.” Grant ignored her outstretched hand and moved past her to the door of his office, opened it, and tried not to show his curiosity. “Six years,” he said. He moved into the office and maneuvered around his heavy mahogany desk, knowing well enough that she would need no invitation to follow. “Six very prosperous years for McCormick Jewels.” He dropped into his heavy black leather chair and gestured at the trappings of the company’s newfound success.  Jenna moved to the middle of the room and took in the framed glossy magazine covers featuring the company’s most beautiful designs and the rows of industry awards that weighed down a glass bookshelf to his left. Her face gave away a mix of jealousy and regret. Good. He’d brought the company a long way in the time since she had nearly run it—and him—into the ground, and he wasn’t about to let her forget it.