You are here: Products A Tycoon’s Bargain by Avery Laval 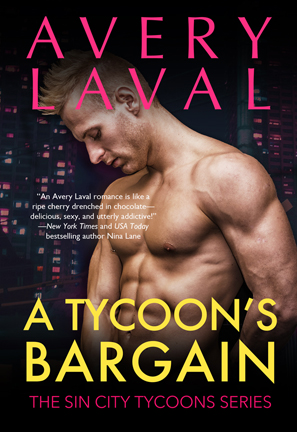 A Tycoon’s Bargain by Avery Laval

At a society bachelorette auction, a hedge fund king gets more than he bargained for…

When Cassie Harris squeezes herself into a too-small neon designer dress for a bachelorette charity auction, she realizes there’s nothing she won’t do for her landscape design business. Her biggest client is hosting the New York society event solely to show off her own filthy-rich, dead-sexy Australian boyfriend. And she’s using Cassie to make herself look good. Cassie steps on stage, humiliated. But an unexpected bidder spends an enormous sum on her, causing gasps throughout the gala. The winner? Thom King, her biggest client’s boyfriend. Cassie can kiss that account goodbye—and her fledgling business along with it.

Thom King has no interest in society girls with grand designs on his wallet. But he has a huge interest in getting that ridiculous gown off of the hourglass figure of Cassie Harris. And once he gets to know her, his interest only grows. She’s as hardworking as he is, as focused, and as smart. Before he met Cassie, women were mere distractions from his hedge fund. Now, Cassie’s the only thing Thom can think about.

But Cassie doesn’t believe a man like Thom can love at all, let alone love a woman like her. And that means Thom will have to use all of the charm and seduction at his disposal to prove her wrong.

As you probably guessed, Avery Laval is a pseudonym—you've probably read her bestselling women's fiction novels. Avery lives in the midwest and enjoys sailing, playing with adorable rescue dogs, and teaching creative writing when she's not writing novels. She loves hanging out with her girlfriends and swapping good love stories.

I love a good New York love story. When I started the Sin City Tycoons series, I knew one of the books had to take place in NYC. I wanted Cassie to have her own business—she's a sassy, straight-talking NYC lady after all. And I wanted her to meet a guy who would totally sweep her off her feet. He can be an alpha, but he had to be a good guy at heart. I like a take-charge kind of guy, but there's nothing hotter than a big brain and a big heart.