You are here: Products A Trace of Royalty: Kopp Chronicles by Gregory Kopp 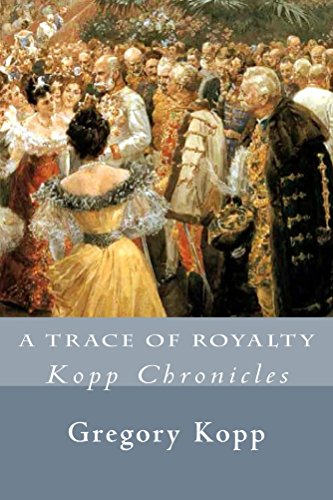 A Trace of Royalty: Kopp Chronicles by Gregory Kopp

From the opulent royal palaces of Europe to the glamour of New York Society, a young woman’s destiny converges with that of a new nation as the sweeping saga of An Immigrant American family continues.

My father's research into our family history inspired me to write the Kopp Chronicles series of books.

Chapter One
February 23, 1843, 10 years before the events of An Immigrant American, Volume 1 of the Kopp Chronicles.
Suddenly, the door of the carriage flung open, as it pulled up to the doors of the Mannheim Palace on an early and cold February morning in 1843.
“Karolina, I am so glad you are here!” A young woman with brown disheveled hair said frantically as she burst into tears.
“I thought you would never get here. I don’t know what to do with my hair, and my mother needs help with the wedding, and they will be here any moment! Please hurry and come with me!” She sobbed and ran toward the doors of the palace.
Karolina Sorg, a pretty seventeen-year-old girl, and her mother Theresia surprised at the sudden stop of the carriage and the loud outburst quickly recovered. They stepped out of the carriage and followed her, breaking with all proper decorum as they entered the palace.
The woman’s name was Princess Marie Amelie Elisabeth Karoline of Baden and that evening she was marrying the Marquess of Hamilton, son of the Duke of Hamilton.
The previous day, her mother had sent an urgent message to Theresia to come to the palace and help with last minute wedding preparations. She also suggested Theresia bring her daughter with her to help the princess.
Karolina and Theresia traveled overnight by carriage and by train all the way to Mannheim from the small village of Sulz, in the Grand Duchy of Baden, a distance of over 160 kilometers.
When they arrived early in the morning at the Mannheim train station, a carriage was already waiting for them. The carriage driver lifted their luggage into the back of the carriage, helped Karolina and her mother inside, jumped to the top and yelled sharply for the horses to move forward. The carriage began to pick up speed traveling through the streets of the city while shaking Karolina and Theresia back and forth inside. The driver, promised an extra fare from Princess Marie and her mother to bring their guests to the palace as soon as possible, drove the carriage and horses as fast as he could. The Grand Duke and the Duchess of Baden and the other wedding guests would be arriving at the palace later that day and all the wedding arrangements needed to be complete before they arrived.
Karolina gasped as she looked through the windows of the carriage at the towering Jesuit Church and the other large buildings in Mannheim as they came closer to their destination. Men and women were walking in the city streets, going about their normal business, but forced to jump out of the way as the carriage careened past them. The carriage driver was overheard shouting at his horses, “Faster, boys, faster. We must get there on time!”
When they arrived at the palace, the carriage horses were panting, but the driver was satisfied with their progress as he unloaded the baggage. Karolina and her mother followed Princess Marie as she ran up the staircase into the Knight’s Hall, the largest room in the building. The Princess kept urging them to hurry, and without stopping, she told the waiting servants to gather her visitor’s belongings from the carriage and bring them inside.
The Mannheim Palace was an imposing structure, originally built in the 1700’s to house the Palatinate Prince-Elector of the Holy Roman Empire and his court. During the Napoleonic wars Mannheim became part of the Grand Duchy of Baden, and the palace, as large as the Palace of Versailles in France, was no longer used as the seat of government and quickly fell into various stages of disrepair.
Princess Marie’s mother, the Dowager Duchess Stéphanie de Beauharnais and her daughter were the only remaining Baden royalty living in the palace. The Dowager Duchess was the adopted daughter of Napoleon Bonaparte, the former Emperor of France, and she moved to the Grand Duchy of Baden over 25 years ago when she married Princess Marie’s father, the Grand Duke Karl Ludwig.
After he died, she was forced to move to Mannheim and they now resided in the Imperial Quarters in the east wing of the palace. The Imperial Bedroom next to the Throne Room was where the Dowager Duchess was waiting and where the hurrying princess was bringing her guests.

Be the first to review “A Trace of Royalty: Kopp Chronicles by Gregory Kopp” Cancel reply