You are here: Products A Town Called Wonderful, Part 3 of 4: from Book 1 of The Underlands Series by Michael Lacey 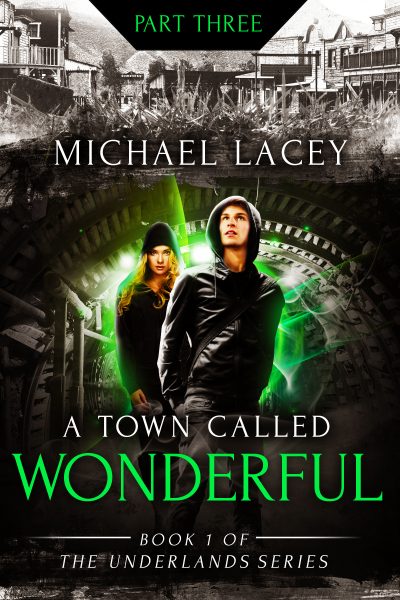 A Town Called Wonderful, Part 3 of 4: from Book 1 of The Underlands Series by Michael Lacey

Part 3 finds our searchers in the most harrowing part of their adventure so far. Having just found out who Sheriff really is, the young couple is shaken. However, they become closer than ever while facing each setback together. Everything is threatened in this installment, but the possibilities of Thomas’s Luminant abilities give them hope, hope that escape is actually an option.

The pace picks up again as Thomas and Emily get separated by the most devastating event yet. Will they find each other again? Can they still escape now? Thomas must be the man he knows he can be, get a grasp on his powers, and let something bigger guide him.

Michael Lacey writes from intimate moments pain—losing his eye in a lawn dart accident at age 11 or losing his mother in 2017—but he strives to keep moving forward. He understands the value of experiencing emotions and giving them the space to move, but pushes towards resolution and closure in the most encouraging ways. He is driven by the pursuit of purpose and hopes his books will help others chase their own true callings.
He’s always dreaming up new adventures for Underlanders as well as entirely new stories. By writing consistently, Michael is working towards a life where he can spend more time each day with his soon-to-be growing family. Keep up with him on Facebook, Instagram, or at MichaelLacey.me.

For this book, it came from a dream. It followed a young couple who got lost in a strange, foggy forest. Once found-or rescued, it seemed-a car salesman offered to sell them a car. Turns out, the saleman was running a scam by stealing cars while people got lost and then selling them to the next poor souls.

I know they’re still out there, Thomas thinks as he studies the unchanging darkness through the windshield of his trusty, old Bronco. “Presumed dead” was a statement he refused to accept. The possibility of their survival is one of the few hopes he still holds on to.
I should’ve started this search long ago, he thinks, knowing very well that he was barely old enough to drive just last year.
This relentless feeling in his soul has grown stronger as of late. It has become a calling, inexplicable and unavoidable. He’s not usually a man of action. This time, however, he has help. He glances over at the pretty girl in the passenger seat.
He isn’t exactly sure how he convinced her to join his adventure; when it comes to crazy exploits, she was usually the one doing the convincing. Either way, he’s driving down some unfamiliar road with the most popular girl in school riding shotgun. How did this happen?
“Thomas,” her chipper voice pulls him from his thoughts. “Are you awake?” He grips the steering wheel a bit tighter and sits up.
“Yeah, yeah. I’m good,” he says with a deep breath. He looks at the aged map in her hands and wonders how he got so lucky. Of all the guys in the world . . . He realizes that he doesn’t want to be with anyone else for this trip and wonders if she feels the same.
“Isn’t this fun?” Emily’s emphatic nature shines through when she speaks. Thomas finds her joyful spirit to be one of her best traits.  “Of course.” Thomas remains straight-faced. He doesn’t seem comfortable in most situations. His anti-social tendencies have kept these childhood friends apart occasionally throughout the years.
The two have been dating—according to Thomas, at least—for a few weeks. Emily doesn’t see it that way. She hasn’t been able to break through his steely demeanor long enough to really read his feelings. To her, they’re just getting to know each other again. Ten years ago, they first met just after Thomas lost his parents—that is, when they went missing.

Be the first to review “A Town Called Wonderful, Part 3 of 4: from Book 1 of The Underlands Series by Michael Lacey” Cancel reply