You are here: Products A Town Called Wonderful, Part 1: from Book One of The Underlands Series by Michael Lacey 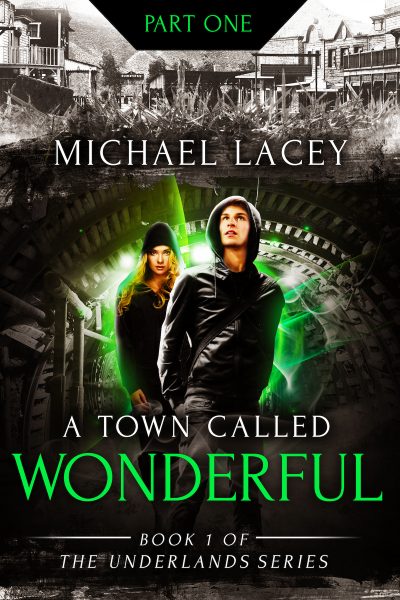 A Town Called Wonderful, Part 1: from Book One of The Underlands Series by Michael Lacey

What if lands of legend and myth did exist? Cities of gold, fountains of youth, and lost worlds of wonder! Turns out, they do exist . . . as Underlands.

A young couple finds a land under time. A crooked government, a Resilient rebellion, a living land, and hidden abilities make this a life-changing adventure. Join Thomas and Emily as they grow closer and learn about sacrifice, purpose, and love.

Is Michael Lacey is the bad guy—Mayor—in his own book? Well, not really, but they’re both missing an eye . . . close enough. Since losing his eye to a lawn dart incident when he was 11, he has gained a very unique perspective on life. He writes from intimate moments pain while striving for forward motion. Michael understands the value of experiencing emotions and giving them the space to move, but he pushes towards resolution and closure in the most encouraging ways. He is driven by the pursuit of purpose and hopes his books will help others chase their own true callings.<br />
On most days, you can find Michael with a mason jar of sweet tea by his side while his toddler son runs him and his wife ragged. He could be taking his motorcycle for a ride, building something out of wood, playing guitar and writing songs, or a number of other creative endeavores.<br />
He’s always dreaming up new adventures for Underlanders as well as entirely new stories. By writing consistently, Michael is working towards a life where he can spend more time each day with his soon-to-be growing family. Keep up with him on Facebook, Instagram, or at MichaelLacey.me.

For this book, I had a dream of getting lost with my wife (or a girlfriend somehow…past tense?) in some strange underground place where a tricky car salesman was scamming people by stealing their vehicles and re-selling them to the next unlucky, lost inhabitants.

Why am I here? Thomas glances at the ancient map in Emily’s hands and then back to the road.  “Thomas.” He grips the steering wheel a bit tighter and sits up. He looks at the pretty girl in the passenger seat. Of all the guys in the world . . . “Isn’t this fun?” Emily’s emphatic mood is consistent with her nature. Thomas finds her joyful spirit to be one of her best traits.  “Of course.” Thomas is much more business-like. He doesn’t seem comfortable in most situations. It’s one of the things that has kept them apart throughout the years since childhood, but now it allows them to work well together when they do. He watches the road curiously. It’s still dark and he expects the sun should be out soon. The morning is beautiful, as beautiful as she is, he thinks as he sees her scrunched up, feet in the seat and arms around her knees. She twists her head slightly, pivoting her chin on her knee and closes her eyes. She looks as anxious to soak up the sun as he is. As is her nature, she smiles as though no one is watching. He can’t help but admire her every chance he gets. To him, she is a new way of breathing and turning away feels like suffocating. But staring too long reminds him of that feeling he’s had when snorkeling and couldn’t seem to get enough air; it’s like each breath holds the hope of life and the fear of death. When his parents were presumed dead ten years ago, Emily was there for him. Having lost her own mom and having a military dad who wasn’t around much, she understands Thomas more than most. Though neither know how to verbalize it, they’d both agree that the colors of the world changed with loss, as if certain hues had gone away with no promise of return.  A thin fog hovers low over the road as the sun starts to rise. The darkness is chased away by a golden flood and Emily mulls over the map.

Be the first to review “A Town Called Wonderful, Part 1: from Book One of The Underlands Series by Michael Lacey” Cancel reply