You are here: Products A Strange Affair by Brienne Dubh 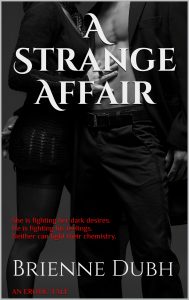 A Strange Affair by Brienne Dubh

I come from a performing background with over 10 years acting experience. I have worked as a producer on various film projects before going on to set up my own production company. With experience of both production and post production processes, I am a trained editor and have also written and produced several short films scripts. In 2010 took a step back from producing realising that my passion was for writing. I now spend my days looking after a high spirited toddler and coming up with imaginative stories where you can escape everyday life. Originally from England, after a few years of travelling the world I moved to Ireland where I currently live with my husband, 2 young daughters, 16 chickens, a pet rabbit and a cat named Tilly

I had wanted to write a workplace romance again for some time. Then one Friday evening after a glass or two of wine, I was looking through a magazine and came across a black and white photo of Chris Hemsworth in prestige. That photo became my inspiration and Aaron Strange was born.

Ellie picked the envelope up and stood before sitting back down. She looked down at her skirt which sat just above her knees. If she did this, she would be crossing a line. She crossed her legs at the ankles and positioned her legs in different ways to see if anyone would be able to tell she didn’t have on any underwear. She stood up again with the intention of going over and asking Josh what she should do when her phone beeped.
Five minutes!
Ellie grabbed the envelope and hurried off to the bathroom at the end of the hall, crashing into the first stall and closing the door behind her. “I can’t believe I’m really doing this,” she mumbled as she shimmied out of her panties, folding and slipping it into the envelope and sealing it inside before hurrying back to her desk, Ellie sat down carefully, fixing her dress.
“Any post?”
So wrapped up in her task, Ellie hadn’t even heard the young intern on post duty approach.
“Yes.” She handed the envelope over with a shaky hand. She looked at her hand, unsure if it was just nerves or fear making it shake. Either way, she was committed now. Ellie watched as someone she barely knew unknowingly walked away, carrying her still warm panties in an envelope.