You are here: Products A Soulmark Series: Books 1-3 by Rebecca Main 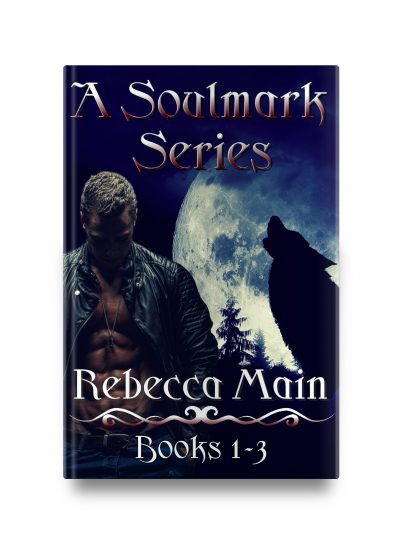 Get the explosive beginning to the highly acclaimed ‘A Soulmark Series’, Books 1-3, from breakout author, Rebecca Main!

*****
Coven (A Soulmark Series Book 1)
“Stay out of the forest,” Gran had said. Zoelle should have listened.

Now, she must navigate a world she only ever read about in fairytales. A world full of witches and werewolves out for blood. Yet, no story could have prepared her for Xander Adolphus—the volatile Alpha of the Adolphus Pack—or the seductive soulmark that binds their souls together.

Trapped in a carnal game of cat and mouse, Zoelle must tread unfamiliar ground, steeped in supernatural politics. Can Zoelle outrun a wolf bound and determined to mark her as his? Or will this new world swallow her whole?

Yet, when her latest heist to steal from the Adolphus family tailspins her into a supernatural world, she must learn to steel her nerves and… her heart.

By a cruel twist of fate, Starlight Warden Calliope Sawyer is forced to question everything she’s come to know, when confronted with her soulmark: a dangerous lycan. Now, these two enemies must decide whether to fight for love or fight each other.

Rebecca Main published her first romance novel—Coven (A Soulmark Series Book 1)—in June 2017, and hasn’t put down her keyboard since! Quitting their respective jobs in May 2017, Rebecca and her husband now travel the world. Their calico cat, Dorcas, waits patiently for their return to become a “city" cat once more. Rebecca is an avid reader, travel-hacker enthusiast, and karaoke queen (after a shot or two). Her current writing passion is romance with a hearty dash of supernatural and paranormal thrown in for good measure.

Tear-inducing accomplishments include hitting #1 on the Amazon Top 100 list in Fantasy Romance and Paranormal Romance for Witches & Wizards, free climbing out of Belize’s Crystal Cave, also known as the Mountain Cow Cave, and starting a publishing house—Via Graphia LLC—with her husband!

I was inspired to write this book—and this series—after spotting a couple who were very much in love walking through the airport. They had matching tattoos of full moons on their forearms and the idea sparked instantly inside of me!

Kidnappers do not get to look so—so sexy. They definitely aren’t supposed to have been allotted sinful abs or hair that trails down from chest to naval to… well…. He reaches out to touch me, running his fingers along the underside of my chin almost reverently. Almost. By the smug look he sports, one eerily similar to Ryatt’s, I close my mouth with a snap and level him with my best glare.

“Don't touch me,” I snarl, feet itching to take me further back. But going back isn’t an option. Not with the tree pressing so snugly against me now. I side step again, hardly gaining ground, but it's something. His wolfish grin dips deeper for just a second and a dimple appears. I hold my breath, heart beating painfully against my chest as I watch both grin and dimple disappear behind his stoic facade once more.

“It’s just below her collarbone. You’ll have to adjust her shirt to see it,” Ryatt tells him cheerily. The green-eyed nods resolutely and crowds closer. Startled, I awkwardly attempt to side step, but he is swift to counter and traps me. One brawny arm bars either side of my head. His eyes sweep over my form, lingering on the belt that binds my wrists. “Iron?” The man tilts a look at his brother, who watches intently from the sidelines.

"But of course. Don’t you recognize her, brother? It’s Diana’s granddaughter, the littlest witch—”

“Excuse me?” I utter impulsively. “What did you just call me?” The brothers share a look I almost miss, fleeting confusion, before the man’s gaze returns to my chest. “Hey!” I shriek, “Eyes up here, asshole!”

Ryatt laughs as his brother flushes from my reprimand. But then his eyes harden, and one warm hand trails down my side to my waist, straightening and tugging down my shirt a few inches. Something akin to a growl rolls deeply through his throat. I can't help the cold fear striking at my belly, nor the way it quickly spreads.

Tears swim at the edge of my vision before he shushes me absentmindedly. He stares at my birthmark, now revealed. The little, curved sliver of pale-pink skin resembles a crescent moon. Green eyes meet brown, and he gives a smile that seemingly is meant to be reassuring but does quite the opposite.

This man is the real danger of the night. The one Gran had warned about.

His other arm drops as he leans forward, fingers caressing the bruises and welts that cradle the belt wrapped round my wrists. “Iron,” he tells me, smile slanting just enough to become patronizing, “and witches do not mix well.”

“I’m not a witch,” I whisper back, ensnared by his intense gaze.

Our glares collide in a standoff. Just as I prepare to defend my claim, he concedes, dropping his eyes to my wrists once more. His fingers quickly undo my binds, letting the belt fall to the forest floor with a soft thud. I groan in relief, eyes drifting shut in a semblance of peace as the ache in my bones begins to recede.

Manners ingrained in me long ago beg me to thank my captor, but common sense points out the obvious; my captor will receive no thanks from me.

When his fingers languidly intertwine with my own, I buckle in shock and stare at him in astonishment. Words lost to his casual demeanor. The move is intentional, no doubt to stun me, and he takes advantage of my bewilderment slipping one steel-banded arm around my waist and pressing against me. I suck in a harried breath.

“This might be… unpleasant for you.” He tells me, eyes half-mast as his gaze focuses steadily on my birthmark. “They say the sealing of a soulmark can be quite… intense. But what kind of pleasure is without its own pain? Hmm?” He releases my hand to scorch a trail upward and across my breast.

“Please.” My voice cracks pathetically as his fingers inch toward my birthmark. “You're wrong. It’s just a birthmark.” My heart continues its erratic dance, but queerer still is the wild pulse now coming from my birthmark. “Don’t!” But it’s too late.

The point of his middle finger brushes against the mark, and I am gasping. Reeling. Hurtling toward darkness.

And then everything is gone.

Only he and I remain among the stars and trees and earth and air. A crushing wave of emotion and energy surges inside me. Finds every nook and cranny left unattended and takes root. Rocks my fucking world. Nothing has ever made me feel so… alive. It is as if my body is reclaiming some lost part of myself, and the soul-searing experience takes my breath away. All that's left in its wake is a sudden and all-consuming burning. A need. A hunger. I gasp, feel lightning strike at my very core, and watch helplessly as my entire world is turned and flipped. Wind whips around me. Rushes through me. Fills me so completely, I feel I might burst.

“Let it be known that thee are found,” he whispers roughly, his head tipping to rest against mine as his hand presses flush against the birthmark, “and my soul awakened. The stars incline us”—we share a shuddering breath, eyes boldly meeting one another—“and so we are sealed.” I stagger forward. Choke on the rush of power and heat as they barrel into me. Mercilessly. His scent and touch flood my senses. I feel him. Everywhere. Inside and out.

I push away from his embrace, breaking the blazing contact that is his hand to my heart. No. Not heart. Birthmark. The bark scrapes against my skin, reminding me of reality, but all I can hear is my blood as it pumps through my veins—screaming at me to move closer to this man. He leans forward. I cringe back.

“Don’t,” comes my hoarse reply. My breath sounds harshly against the night air as beads of sweat drip down my back. “What did you do?” He takes a step away from me, releasing me completely from his hold and my knees buckle comically in response. He remains near as I try to collect myself. As I try to douse the fire raging inside of me. Fill my lungs with air. Let my bones tremble in relief as the onslaught desists. But the blood that courses through my veins remains on fire. And the birthmark yearns for his touch.

I raise my eyes to his, and all I see is me. Right at their very center.

Faintly I feel my birthmark pulse with two beats instead of one. Somehow, I know—without a doubt—that the other beat belongs to him. Tears burst forth before I can stop them, and I hardly notice the way his hands find their way back to me in my distress. He inhales deeply, nostrils flaring as he watches me, a thousand emotions swirling behind his green eyes.

“What did you do?” I whisper roughly as I slump toward the ground, my energy leaving me in one fell swoop. My words are greeted with a frown and downward flick of his mouth. Before I drift into unconsciousness, his words sound a soft echo in my mind.

Be the first to review “A Soulmark Series: Books 1-3 by Rebecca Main” Cancel reply