You are here: Products A Slice of Sin by Cherry Wild and Sophia Soror 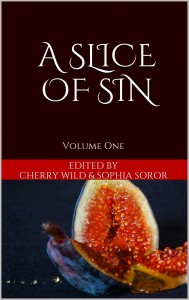 A Slice of Sin by Cherry Wild and Sophia Soror

Women drive these stories, taking the lead in sex, pushing the boundaries of their experience, and always enjoying themselves. Discover how these women satisfy their desires; in 13 perfectly bite-size stories of lust and intimacy that will seduce you and keep you coming back again and again, for just another taste. From stories of casual sex to stories of the intimacy and enduring passion of established couples, these stories will whet your appetite and satisfy your cravings (and maybe leave you with some new ones…).

Cherry Wild and Sophia Soror both love to write smut. When they realized their mutual passion, they decided to create a publishing company: A Two Dame Production. Now they not only get to share their favorite genre, but they get to spread the love by producing anthologies of literary erotica.

We at A Two Dame Production believe in sex positivity, celebrating sexuality, and just good old fashioned titillation. This is the first volume in what we hope to be a looooong series.