You are here: Products A Single Step by Georgia Rose 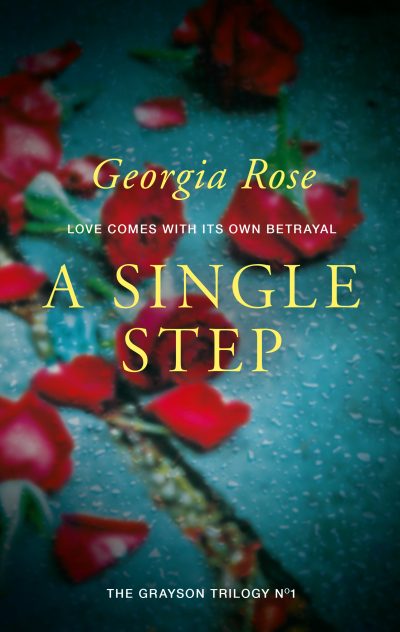 A Single Step by Georgia Rose

A woman wracked with grief. A man with a troubled past. Will trust build a bridge between them or will it be destroyed by dark secrets?

Shattered by her daughter’s death and tormented by her husband’s infidelity, Emma Grayson seeks refuge in solitude. As she slowly re-enters the real world, she takes on work at the sprawling Melton Estate’s stables. Initially distracted by her painful healing process, she realizes that the property’s handsome manager carries his own sadness…

When Emma is thrown from her horse and badly injured, Trent provides tender, selfless care. She doesn’t want to appear ungrateful for the lonely ex-RAF man’s support, but her anxiety keeps her silent. After his secretive past surfaces and events take a dramatic turn at the estate, she can’t help but feel violently unsaddled all over again.

Will Emma ever find inner peace and love again, or is she destined to live with only heartache and pain?
A Single Step is the first book in the Grayson Trilogy, a dark romantic suspense series. If you like wounded characters, slow-building romance, and page-turning twists, then you’ll love Georgia Rose’s powerful novel.

Georgia Rose is a writer and the author of the romantic and suspenseful Grayson Trilogy books: A Single Step, Before the Dawn and Thicker than Water. Following completion of the trilogy she was asked for more and so wrote a short story, The Joker, which is based on a favourite character from the series and the eBook is available to download for free at the retailer site of your choice.

Georgia’s background in countryside living, riding, instructing and working with horses has provided the knowledge needed for some of her storylines; the others are a product of her passion for people watching and her overactive imagination.

Following a long stint working in the law Georgia set up her own business providing administration services for other companies which she does to this day managing to entwine that work along with her writing.

Her busy life is set in a tranquil part of rural Cambridgeshire in the UK where she lives with her much neglected husband and dog. Their son, currently at university, comes and goes and their daughter, having delighted them all for long enough, has eventually moved out, married, and is discovering the joys of being all grown up and having a mortgage.

A Single Step, and in fact the complete trilogy, was the first story I cared so passionately about I couldn't stop writing it. I love the setting and that has been commented on by many readers who feel the same as I do. I thoroughly enjoyed sharing my love of horses in the story and I included a cute little dog that has won the heart of many who have picked up this book. It was a joy to write.

The pub was busy, with many of the estate staff there making it noisy, but as the evening wore on I became less and less aware of what was going on around me and more and more conscious of Carlton next to me. Late in the evening I went to get in another round. I’d already had more to drink than I should have but that was not about to stop me and as I stood at the bar trying not to look drunk I saw Trent look up at me from the other side. His initially friendly expression changed to one of disapproval as he registered my drunken state which, as it turned out, I was not managing to hide that successfully after all.
Ignoring him I took the drinks to the table and slid back along the bench. Carlton put his arm around me, drawing me closer, and for once I didn’t move it away again – it felt good. We all spilled out of the pub a little later; Wade was driving and Carlton held my hand as we headed to the pickup, then pulled me up and onto his lap, wrapping his arms around me. I tried to say I’d get in the back but frankly not that insistently. It was much more comfortable where I was and although I generally aim to abide by the law I was clearly in the mood for throwing caution to the wind and risk getting stopped in the half-mile journey along country roads back to the estate. Okay, so perhaps I was not a great risk-taker, but it was not the only thing I was about to be reckless over.
We pulled up outside the stables and I climbed out, followed by Carlton, who announced he was going to help me with the late watering, which sparked considerable amusement among everyone else in the pickup. We could hear their hollering even as they disappeared down the lane. I set off across the yard, over to the stables, the cold air hitting me but my face feeling warm as I let go of Carlton’s hand and we successfully topped up the water in each stable, though I seemed to be slopping more around than was really necessary. When we’d finished I reached into the feed room to turn off the lights, closing the padlock on the door.
I turned and saw Carlton leaning up against the post-and-rail fence, watching me hungrily as he stood, quickly closing the distance between us. Putting one hand round my waist he pulled me towards him, wrapping his arms round me until I was pressed up hard against his body. Running my hands up his strong arms and leaving one hand on his shoulder I brought the other across onto his chest, where I let it rest, feeling his heart beating rapidly. He looked down at me, his eyes full of desire, and I knew that a night being fucked senseless by Carlton was exactly what I needed. One of his hands was in my hair as he brought his lips down to mine but before they met a dark voice came out of the night, speaking softly but firmly.
“It’s time for you to go now, Carlton.”
He exhaled harshly as he pulled back from me.
“Oh, give me a break,” he said roughly, turning, and as he did I caught sight of Trent standing a few feet behind him. Trent stared straight at me and without breaking eye contact he indicated with his head to Carlton that he should leave. Carlton paused for a moment, taking another look at me, then shaking his head in exasperation and muttering goodnight walked away across the yard towards the gate. I stared after him in disbelief – how could he leave me just like that? Trent continued to look at me and when I met his cool gaze again he shook his head a little, frowning, as if confused.
“This isn’t like you, what’s going on?” He paused, but as no answer was forthcoming he continued more angrily: “You’ve got to learn to look after yourself better, Grayson. You’ve had too much to drink and you can’t protect yourself in that condition. Fortunately, at least you were with Carlton and he cares for you, even if he’s more interested in getting into your pants at the moment than in looking after you, but you shouldn’t have put yourself in that situation. Don’t you have any respect for yourself?” He was lecturing me as if he had some sort of right to do so and my eyes welled up as I looked fixedly down at my hands.
“I’m a grown-up, Trent. Why is what I do any of your business?”
“Because you’re not behaving in a responsible manner,” he snapped back, and then carried on, a harsh edge to his voice now. “What is it, Grayson? No smart comeback from that clever mouth of yours? That’s not like you.” His mocking tone hurt me but I had no intention of telling him what was going on; my feelings were already threatening to overwhelm me and as I looked up at him I could see the shock on his face as he registered the pain across mine.
“I need to go to bed,” I whispered, and walked unsteadily towards the cottage. I remembered going upstairs, lying across my bed, then nothing more, letting the darkness take me.