You are here: Products A SEAL’s Surrender by Tawny Weber 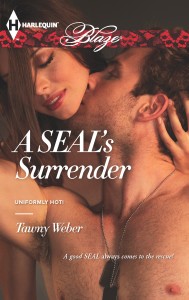 A SEAL’s Surrender by Tawny Weber

Mission: He’s home to take care of some family business.

Obstacle: Eden Gillespie. The girl who always lands in trouble…has landed in his bed!

Lieutenant Commander Cade Sullivan is the job. His commitment to the Navy SEALs is absolute-almost. Worse still, he’s been summoned home, where his privileged family is the town royality and women vie to be one of Cade’s conquests. One of them in particular….

Ever since they were kids, Cade has been rescuing Eden Gillespie. Now she’s decided she owes him one heck of a thank-you-one that involves a bed, naked bodies and sweet satisfaction. But when their sexy trysts are discovered, Eden becomes a bit of a town sensation-and not in a good way. Can she convince her SEAL to risk one last rescue operation?

Readers can check out Tawny’s books at her website, www.tawnyweber.com, or join her Red Hot Readers Club for goodies like free reads, complete first chapter excerpts, recipes, insider story info and much more.

I love military heroes and love coming home stories, so this was a way to combine the two.

“You see, I made a wish. You know, on my birthday candle. It’s the same wish I’ve made for the last handful of years.”
“What’s your wish?” he asked in a slow, cautious tone. Well, he wasn’t a well-trained special ops guy for nothing.
“To have sex with you.”
Cade was pretty sure Eden could have kicked him in the balls at that moment and he wouldn’t have felt a damned thing. Nope, his brain was frozen in shock, while his body was enflamed with passion.
He gave a quick, contemplative glance at the cliffs. How far was the jump? He’d gone deeper, he’d probably survive. And it’d be less risk than he faced right at this moment.
Because right now, the threat wasn’t the cute little brunette standing in front of him. Nope, it was his own desires putting him at risk. Desires he shouldn’t feel, knew better than entertaining, and usually pretended didn’t exist.
Cade had rules. Strict ones that he lived his relationships by. The first being that there were no strings. None. That included lifelong relationship ties that went all the way back to hauling her off her trike when she’d run it into the bushes at the base of his driveway.
They had a history.
They had a pseudo-friendship. The closest he’d ever had with a woman.
What they shouldn’t have was heat. Passion. Sexual needs that arced between them like a live electric current, threatening to burn down anything it touched.
“Look…”
What?
How did he explain his rules? Ask her to promise not to get ugly when he walked away? To accept that once he walked, they wouldn’t be playing again the next time he was home? To other women, it was easy. But to Eden? He’d sound like a prick. And while he might laugh off her always calling him her hero, he wasn’t excited about the idea of destroying that myth and hurting her feelings all at the same time.
“Poor Cade,” she laughed, like she thought it was funny that she’d tied him in knots then forced him to choose between his morals and his body’s pounding needs. “It’s hard, isn’t it?”
Oh baby, she had no idea.