You are here: Products A Reluctant Trail Bride by Bethany Hauck 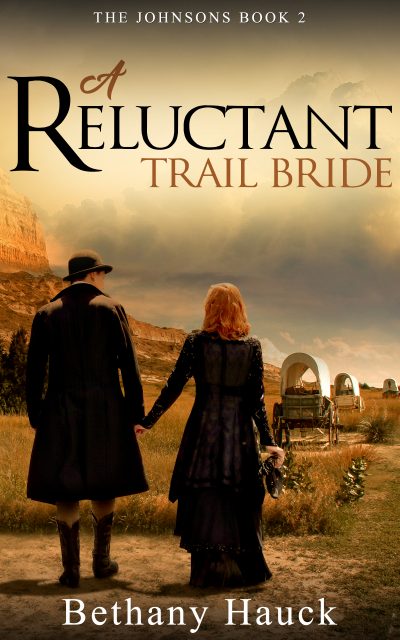 Lily Johnson said goodbye to her brothers and sister in Book 1 of the Johnson series ‘Married on the Oregon Trail’. She stayed behind in Paducah to marry Jeremiah Smith, and to get over losing the man she truly loved, Nick Garrett. She finds out that Jeremiah played a role in her parent’s deaths soon after. She blames herself and silently vows never to court a man again.
With the threat of war seeming more inevitable each day, John and Victoria Johnson decide to leave Paducah and travel with Lily to Oregon, where her brothers and sister went. It’ll be a fresh start for all of them, as they are joined by another of their grandsons, Mark Roberts.
Nick Garrett leaves Paducah heartbroken. He’s glad he was able to leave earlier than planned because watching Jeremiah with Lily is killing him. Nick knows if he doesn’t get away soon, he’ll end up doing something stupid. He travels to Independence, and although his wagon train isn’t leaving for a few weeks yet, he settles in and prepares himself for the journey, while trying to forget about Lily. He’s quite surprised when he sees John and Victoria pull their large Prairie Schooner into the wagon train camp, a few days before the train heads west to Oregon. He’s even more surprised to see Lily standing up behind them, and hanging onto the back of their seat.
Conditions on the trail are difficult, and many things go wrong, one of which leads to Lily and Nick having to marry. Although everyone else knows the two of them are made for each other, it may take a trip or two over Nick’s knee before Lily figures it out, as she struggles to forgive herself, and go on with her life.

Although this is a stand-alone novel, many of the characters were introduced to the series in; ‘Married on the Oregon Trail The Johnsons Book 1’.