You are here: Products A Question of Innocence by Gabrielle Glenn 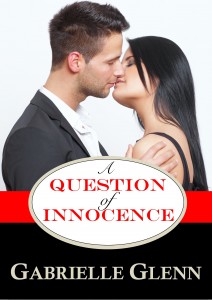 A Question of Innocence by Gabrielle Glenn

Paige Johnson is new in Albuquerque, needing a fresh start. Her Aunt Miriam has found her a job. She is working for Brock Montgomery, a wealthy, handsome ex-Marine, who was willing to hire her without any questions. Brock and Paige can soon feel love blossoming and they give in to their passion, but will it survive when Paige’s New Jersey past comes to find her?

Paige had a great life back in New Jersey, but that life is over. She loves her new job and her new boss, Brock Montgomery, is amazing. Not only is he good-looking, rich and kind, but he is the best lover to ever share her bed. Brock ignited a passion and desire in Paige that cannot be contained. But more than that, he is giving her a chance at a new life – a better life than she could have imagined. She is sure that if Brock ever finds out what happened, he would leave her. Will she be able to maintain her secrets and save her relationship with Brock?

Brock finds his new employee, Paige, undeniably attractive. As they spend time together and indulge in their physical attraction for each other, Brock has more questions than answers. He isn’t even sure Paige Johnson is her real name. Despite all his misgivings, Brock’s gut, which he learned to trust as a Marine, tells him she needs his help and protection. But when the truth about Paige starts to come into focus, Brock questions himself. Is Paige innocent or is she drawing him into a dangerous world?

Always a fan of undeniable love, someday she’ll write her own love story, about eloping with her husband after only knowing him for six weeks. This year, Gabrielle and her husband will celebrate nineteen years of marriage.

I have always loved romance! I love reading romance and watching shows like the Bachelor and Millionaire Matchmaker. This book was inspired by some of the trips my husband and I have taken together and the places we have lived. We spent about 18 months in Norther New Jersey and loved the people there. Once you can get past their tough exteriors, they are among the most genuine and caring people we have met. Additionally, we spent time in Albuquerque visiting my husband’s brother and found it to be a very unique and interesting place.

Brock stood leaning over his desk, pretending to be thumbing through spreadsheets, but instead he was really watching Paige. She was organizing the papers that were strewn all over her desk into neat piles.
Maybe she does know what she is doing.
Paige’s immediate fastidiousness impressed Brock. His time in the Marines had created a neat-freak in him. He couldn’t tolerate disorganization in himself or his employees. He continued to watch her moving around her office. She had run out of room on the desk for her papers and was now creating additional piles on the floor. He followed her movements and found himself mesmerized. He couldn’t take his eyes off of her. He even felt a hardness in his pants as Paige bent over, revealing a round, firm behind.
She’s got a great ass.
He couldn’t help but wonder about her exercise routine. He would love to show her the latest technique in squats. Not that she needed it. He sat down and stared at the spreadsheets, envisioning standing behind her as she moved up and down. He thought about her workout clothes stretching as they revealed each part of her body as she went through the movements of the squat. He closed his eyes as he considered how she might smell as he got close enough to feel her body heat …
“Brock, are there any more filing cabinets? I am running out of space in the two that are already in my office,” Paige said.
Startled, he stood up straight and faced her directly, trying to compose himself. He wished that he could will his hardness to disappear quicker. He hoped Paige would not notice.
How embarrassing.
“Yes, there are more in the storage room, I believe. I can show you.”
Brock gestured for Paige to walk in front of him. He found himself wanting to get as close as possible to her, but he held back and maintained a safe distance behind her.
“This way?” Paige asked, pointing to the back of her office.
“Yes, it is straight through that door.”
When they reached the door, Paige turned to Brock. She said nothing, just stood in front of the door, waiting for something.
It was then that Brock noticed her perfume. It was a sweet smell of oranges and something else. He couldn’t place it. Brock wanted to get closer, but didn’t.
“It’s locked. Do you have the key?” Paige asked.
Brock heard what Paige had said, but somehow it didn’t register. He was fixated on her perfume. He wanted to know where else she had sprayed it. Was it on her thighs? Between her legs? He had known other women to spray perfume in those luscious, forbidden places.
“The key?” Paige repeated herself.
“Yes, of course.” Brock reached into his pocket and pulled out a key chain full of keys. He kept everything on one keychain. He would be lost without it. He unlocked the door and motioned for Paige to enter.
“Ladies first.”
Brock felt a jolt move through him as Paige brushed past him, lightly touching his right arm with hers. As she grazed his arm, his right hand went limp. An unintended reaction. He dropped the keychain.
Dammit.
Brock bent down to pick it up. He smiled.
Yes, she does spray perfume in forbidden places.