You are here: Products A Pretty Mess: An Astonvale novel # 1 by Carla Caruso 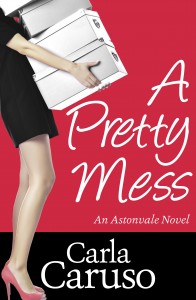 A Pretty Mess: An Astonvale novel # 1 by Carla Caruso

Sometimes, to come clean, you’ve got to get your hands dirty …

Celeste Pretty, a self-confessed neat freak, has found the job she was born to do: a professional organiser, de-cluttering people’s homes and workplaces. Her new business gets off to a cracking start when she lands her first client, health and fitness guru Natalia Samphire, in the well-heeled suburb of Astonvale. But things get messy at Natalia’s mansion when Celeste finds a blackmail note and other mysterious items. And then there’s Lenny Muscat, the sexy builder renovating the place, whose constant presence is muddling Celeste’s usually organised brain.

When things get decidedly suspicious at the mansion, she and Lenny have to team up to investigate. But will Celeste emerge with her heart and professional reputation unscathed?

This is the first in the Astonvale rom-com mystery series.

Carla Caruso was born in Adelaide, Australia, and only ‘escaped’ for three years to work as a magazine journalist and stylist in Sydney. Previously, she was a gossip columnist and fashion editor at Adelaide’s daily newspaper, The Advertiser. She has since freelanced for titles including Woman’s Day and Shop Til You Drop. These days, she plays mum to twin boys Alessio and Sebastian with hubby James. A Pretty Mess is the first in the Astonvale rom-com mystery series. Visit www.carlacaruso.com.au.

My mum is an absolute neat-freak Virgo. The family home always looked like a magazine spread (like my protagonist Celeste Pretty’s). And I’ve always been fascinated by the world of professional organisers. Of course, de-cluttering people’s homes and offices for a living means coming across people’s most personal possessions, which can lead to some interesting finds…

Chapter One
Celeste Pretty didn’t like messy beginnings. Especially when meeting her first potential client as a professional organiser. Okay, her first and only possible client thus far.
It had started with getting a pen mark on her favourite powder-blue shirt right before she was about to head out the door, which meant turning back for a speedy, sweaty change. Then her fourteen-year-old navy Holden Astra had been moody. Notoriously moody. Its engine refused to fire until after much cursing and waiting on Celeste’s behalf, putting her approximately nine minutes behind schedule.
Then her purported assistant-to-be, Filippa — or Flip as she liked to be called (the grandkid of her dad’s long-distant cousin) — had texted to say she needed a ‘mental health’ day and wouldn’t be joining her after all. Hipster code for ‘couldn’t be arsed’, more like it. And Celeste had only promised Flip work — yet as it was to materialise — to appease her dad.
Somehow Celeste had still managed to arrive at her appointment on time … and now nobody was answering the door. The indent between her eyebrows felt etched into place. She pressed on the doorbell once more, but instead of footsteps could only hear ongoing banging and hammering beyond: the sound of Astonvale.
Renovations were as rife in the well-heeled South Australian suburb as infinity-edge pools and Wimbledon-worthy tennis courts. At least Celeste knew her way around the latter, playing the sport socially; the rest she was still learning about. She’d only recently secured her own tiny abode in the inner-southern suburbs, landing the hefty mortgage while she was still in full-time, permanent work. Updating her car, meanwhile, would have to wait.
Stepping off the tessellated tiled verandah and onto the stripe-patterned lawn, Celeste peered up at the 1880s, Victorian-style sandstone mansion for any sign of life — beyond tradie noise. The place was big even by Astonvale standards. Celeste had been surprised by how cinchy it was to crunch up the circular gravel driveway, past the two-tiered water fountain, and ring the doorbell.
The security gates had been wide open, likely due to the dirty ute parked out the front, its side emblazoned with the words Muscat Building Group. Not that the easy front access had made it any simpler for Celeste to get inside the mansion. She’d already tried calling the PA of her potential client — fitness guru Natalia Samphire — to no avail.
Yes, the Natalia Samphire. The one whose Ballet-Tastic barre workout classes were bigger than Zumba. Who had spawned an empire, her name now on everything from gym-wear to clean-eating cookbooks. Who’d just moved into the area, crossing the border from Melbourne, and was about to set up a fitness studio, which had the yummy-mummy brigade in a spin. Landing her as a first client would be quite the coup for Celeste. If she ever did get to meet the curvaceous blonde in the flesh.
Right, there was nothing for it. She’d have to go looking for a back entrance and pray that Natalia didn’t have one of those horse-like dogs, trained to attack, that rich people always owned. Celeste marched across the lawn, swinging past a bay window, taped up with black plastic. Her reflection stared back at her. At least her chin-length, honey-brown bob — which her best friend, Betty-Lou, meanly described as ‘scary Anna Wintour-style’ — and her white blazer still looked immaculate. Unfortunately, her slightly angular nose couldn’t be helped.
She rounded the corner, the manicured gardens continuing and an obligatory pool beckoning … and gagged on a mouthful of dirt. Powdery particles filled her nostrils, contaminating the fragrant spring air.
Amid rapid blinks, Celeste spied a fat, orange, flexible pipe perched inside a side window. One that had just belched out a cloud of dust. Likely attached to some sort of industrial extraction fan. Silent scream. The morning had gone from bad to worse. She could just imagine her former interior design boss, Imogen Karmel, laughing in her face right then. If only Celeste had had the backing of affluent parents to fund her business start-up. Then maybe she could have met Natalia in a pristine office, instead of her business being mobile. Home-based.
Dusting off her mouth and lapels, Celeste pivoted on a suede loafer and headed back in the direction from which she had come. As she strode, she savagely rifled around in her tote for her phone. She’d try Natalia’s personal assistant one last time before deciding on her next plan of attack. Natalia was exactly the kind of premium client Celeste was aiming to attract — and she’d emailed Celeste! She couldn’t let the opportunity slip through her fingers.
‘Power-walking anywhere in particular?’ a deep voice cut through the air. Through the banging and hammering.
Celeste looked up and into the coal-black eyes of an Adonis. An Adonis in a dirt-stained grey tee, cargo shorts and steel-capped boots. The coal-black eyes — which matched the healthy head of mid-length, wavy hair and faint stubble — were shielded by clear safety glasses. He was pushing a wheelbarrow of bricks, flaunting biceps like Rafael Nadal and sturdy, muscular legs like, well, Serena Williams — in an entirely good way. The mouthful of dust lodged in Celeste’s throat. She couldn’t decide whether she wanted to scrub the guy or jump him…

Be the first to review “A Pretty Mess: An Astonvale novel # 1 by Carla Caruso” Cancel reply