You are here: Products A Poor Man’s Supper by Jim Gulledge 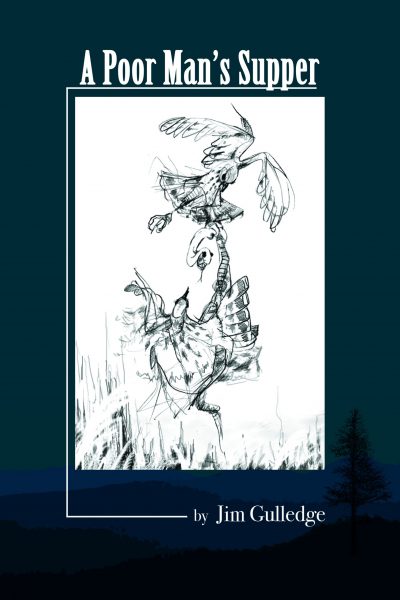 A ballad in prose set in the mountains of North Carolina. Two people, destined to love each other, but forever doomed to be apart… Vancie Keller is trying to survive on her mother’s failing farm when her life is forever altered by the arrival of two men: Josiah Buckland and Jagger Hill. One, she will love, the other she will marry. She has a secret neither of them know. Orphaned as a teen, Josiah Buckland came down from the rugged mountains of North Carolina to try to find work and possibly a home. He didn’t expect to find the love of his life. Jagger Hill has secrets of his own. When he comes to town and starts to rebuild, nobody knows him for who he really is, but people will soon learn. Some secrets cannot be kept forever…

I was shaped by my large, Southern extended family and was taught at an early age never to let facts get in the way of a good story. Much of my own story has been lived out in the small village of Misenheimer in North Carolina. As a young man, I chose to attend Pfeiffer College where I met my wife, Linda. I have now worked there for the past thirty years currently serving as the Director of Academic Support Services and Assistant Professor of Developmental Studies. The passions of my academic life are helping young people in their life journeys and teaching a course every other year on the works of C.S. Lewis and J.R.R. Tolkien. I was prepared for my career by earning a B.A. in Christian Education from what is now Pfeiffer University, an M.A. in English from Clemson University, and a DMin. from Gordon-Conwell Theological Seminary in South Hamilton, Massachusetts.
In my spare time I explore the nearby Uwharrie Mountains with my dog, Shasta; serve as a guardian ad litem for abused and neglected children in my community; and continue in my futile attempts to master the ukulele.

While attending the funeral of my Aunt Lois, I voice in my head said, "This is where the story begins."

Vancie Keller rocked slowly back and forth on the weather-worn porch of the farm house. She looked the part of an expensive, French, store-bought doll, and she was as uncomfortable as hell. Mattie had spent all day Friday boiling her clothes in the big wash pot in the backyard and most of the day on Saturday pressing them with a hot iron. The end result was clothes with creases so sharp that they threatened to draw blood every time that Vancie turned. After all of her dancing around, Mattie had finally threatened her life.
“Child if you twist yourself one more time, it ain’t your starched-up dress that is going to hurt you.”
Her mother, Lois, had worked her body over in the same fashion in a washtub in the summer kitchen, scrubbing her until she was sure that she would bleed. It was Sunday morning now, and Vancie had been parked on the front porch, hair curled, with instructions to rock just fast enough to fan but not fast enough to sweat. Her only hope of salvation was Big John pulling the wagon around front, loading her sorry self into it, and getting up enough speed for her to at least feel the spring breeze blowing through her hair on the way to another form of torture: church.
Sadly, Vancie was about the only pretty thing on the Keller farm that morning with the exception of some buttercups blooming by the front steps. Although her family’s farm had once been a showplace in the small, mountain community, life had not been kind to the Kellers. Vancie’s dad had come back from the war briefly, but not in one piece. With part of his left leg gone, and even more of his mind, Marcus Keller never became a real farmer again before his death. God knows he tried. Big John and Mattie tried even harder, but injury and age had left their mark on the Keller place. Even deeper than the gullies in the field were the lines in the face of Lois Keller. Though once a woman of exceptional beauty, the death of her husband and her family’s unrelenting slide toward poverty left wounds on Lois’ body and soul. All the brightness of her youth had vanished, replaced by a sharp tongue and dark disposition.
Every time Vancie made a false step, her mother’s words rained down on her like hail in a summer thunderstorm.
“Go ahead then, you fool child. You are more and more like your daddy every day. Always off in a dream. Well, dreams won’t fill your belly, and honor and nobility don’t satisfy the bank. You need to get some sense. Look where his noble dreams got him! Life is hard, and it’s all about surviving in a tough world. Instead of looking for a man to come along with a buggy load of fancies, you had better be looking for a man to come your way with a pocket full of silver!”
Vancie had heard this speech more times than she had seen lightning bugs in the yard. Fact was, she just didn’t care. She hardly ever thought about men and never thought about the considerable beauty that she had inherited from her mother. The only time that Vancie Keller ever saw her own face was on a clear day when she was looking in the creek water for tadpoles. She would rather be wrapped in barbed wire than strapped into a church dress with her cheeks pinched and her body scented with rosewater. As soon as their wagon pulled back into the yard after church and dinner on the grounds, she would drop her dress on the floor of her room, pull on her britches, and be out the back door to save what was left of the day exploring the woods, creeks, and meadows on the farm. “Well,” said Vancie, going out the back door shouting at her mama, “if I ever find a man, he will have to be standing in the middle of a creek!”