You are here: Products A Not So Barren World by Patrick Hatt 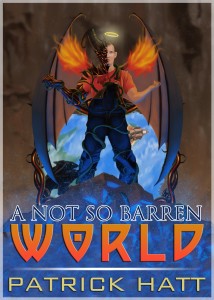 A Not So Barren World by Patrick Hatt

After living with the gods of Olympus for more than a year, Jack and Emily finally have a doorway back to Earth’s time fraction. They prepare to leave with their new born son Jeremiah and the rest of the group, not realizing the gods have other plans for them. Soon Drazin becomes one with the Time Axis and is more powerful then ever. But that’s just the beginning as things literally go to Hell.Following the conclusion of their one sided battle with Drazin, Jack and Emily wake up not knowing whether they are dead or alive. All they know is they must escape the Hell they have been placed in while keeping one step ahead of Lucifer. But hope begins to dwindle as they soon learn he has total control over his domain and there seems to be no way out.

Old friends and foes arise, the Leftovers are found at every turn, the Seven seem to be hiding something and with all forms of mythical creatures from the hecatoncheires to the Gorgon sisters becoming fact, the odds seem to be piling up against them.Jack and Emily now find themselves at the start of another unwanted quest, which may or may not be part of His plan. Either way they are determined to battle Lucifer, escape Hell