You are here: Products A Noble Deception by Veronica Bale 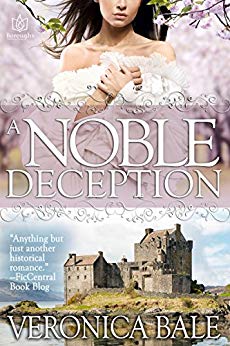 A Noble Deception by Veronica Bale

Scotland, 1455. King James the Second is caught in a bitter feud with the powerful Black Douglas clan.

After the king’s latest insult – the unjust confiscation of Douglas lands – Lord John Douglas, Earl of Kildrummond, fears his quiet realm will be next. In a bid to thwart the king’s ambition, the ailing nobleman deems that his successor will not be a Douglas. Instead, Kildrummond will pass to a distant relation: the landless, wealthless Lachlan Ramsay. There is one catch, however … Lachlan must marry Lord Kildrummond’s illegitimate daughter, Moira MacInnes.

Lachlan does not wish for a wife. Moira does not wish for a husband. The arrangement on offer, however, will give them both the one thing they do wish for: Kildrummond. If they agree to marry – on the understanding that they will have the union swiftly annulled upon the earl’s death – they will both get what they want.

It is a simple enough plan, but can they carry their deception through to the end? When passions ignite, will Moira and Lachlan discover they want more than just Kildrummond?

Veronica Bale is a romance novelist, freelance writer and copyeditor. She graduated from Toronto’s York University with a degree in environmental writing, and she writes Scottish historical romance novels with strong heroines and cracking-good love stories. When she’s not writing, she’s reading, running or spending time with her family.

I’m a romance novelist, plain and simple. I can’t keep the stories that are in my head in there. They’ve just gotta spill out onto paper. A Noble Deception is the first of the Douglas Clan series, following my Highland Loyalties Trilogy, and the stand-alone Legend of the Mist.