You are here: Products A Night to Remember by R.C. Matthews 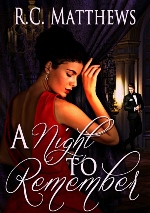 A Night to Remember by R.C. Matthews

When Brett Montgomery is forced to attend a New Year’s Eve charity event for his law firm, he is deliciously surprised to learn that the Irresistible Women in History Auction has been organized and hosted by the woman he desired more than any other during his college years. Beautiful, sexy, and seemingly immune to his charms, Anna was the only woman to refuse him, and the only one he wanted to claim. Finding her again, posing as the alluring Anna Karenina, he wins her for the night. But that’s not enough. They share many of the same passions in life and love, and Brett is determined that he’ll have no other woman by his side.

Anna Cosgrove has spent her life helping others. She is a giver, a self-sacrificing champion of great and humanitarian causes. She’s pledged to help her best friend in his mayoral pursuits by posing as his fiancée and marrying him. In return, he’ll give her the greatest gift she could ever hope for before her time runs out. But when her old college crush attends her charity event to fight for her hand, and wins, she decides to give in to her own desires. For one night, she will be his. When the morning comes and she must say goodbye, she realizes that her one night of selfishness has cost more than she bargained for. Her heart.

The pieces are set. The stakes are high. There is more to lose than gain. Should they risk moving forward? Or leave their hearts and wishes behind in the place where they shared something magical, where they embraced A Night To Remember…

R.C. Matthews was raised in the Metro-Detroit area by deaf parents along with four siblings. She graduated from a liberal arts college with a B.A. in Accounting and German and continues to work as a certified public accountant. She enjoys traveling with her loving husband and children, reading, down-hill skiing, and playing board games. Talisman and LIFE are high on the list of favorites at her home.

I’ve always wanted to write a historical romance, but I don’t have the patience to do the necessary research. So I thought it would be fun to write book that included women dressed from historical time periods at a charity event. That was my starting point and I built the story around that theme.

“You found it,” she said, opening the door to let him slip through before shutting it with her backside.
“Did you really have any doubts?” His arm slipped around her waist, pulling her close as he nuzzled in the crook of her neck, placing soft kisses along her throat. “I’m glad you kept the dress on. I’ve been dying to rip it off you all night.”
“You wouldn’t dare.” She chuckled and then gasped as his mouth scorched a trail down to the swells of her bosom. The heat of his tongue felt delicious on her skin.
“Oh, but I might,” he whispered as his mouth found hers for a languorous kiss. “Isn’t that what women secretly dream of?” His teeth nipped at her earlobe. “A sinfully hot man overcome with lust, ripping her clothes from her body to ravish her until she is senseless with need?”
She drew in a breath and felt the sudden moisture gathering between her thighs. “Are you sinfully hot?”
He pulled back and slipped off his jacket, letting it fall to the ground before tugging the bow-tie loose from his neck. The look in his eyes could have melted butter and her mouth fell open as he methodically worked the buttons open on his shirt, revealing a chest and stomach straight out of a Calvin Klein underwear ad.
Chest muscles flexed as he pulled the shirt out of his pants and down over his shoulders. A single brow lifted in curiosity. “I don’t know. You tell me.”
She wetted her lips and allowed her gaze to dip down to where his hands rested at the fly of his pants slowly nodding her head in acknowledgment.
“Are you going to let me rip that dress off your body and ravish you?”
“No,” she sighed and closed her eyes, wanting to scream out in frustration.
“No?” His warm fingers gripped the silky fabric between her breasts, tugging her playfully towards him. Her eyes shot open and she giggled at the perturbed look on his face. “Why not?”
“It doesn’t belong to me.”
“Hmmm…” he said, pinching softly at her taut nipples straining against the fabric of the dress. A wicked glint flashed in his eyes as he grabbed a handful of the gown’s voluminous skirt. “Then it’ll have to be plan B.”
“What’s plan B?” Did that breathy entreaty come from her?
“Close your eyes, love.”

Be the first to review “A Night to Remember by R.C. Matthews” Cancel reply