You are here: Products A Medical Affair by Anne McCarthy Strauss 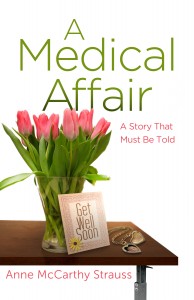 While under the care of her pulmonologist after a life-threatening asthma attack, Heather Morrison enters into a steamy affair with her doctor. This affair violates the state’s code of conduct and his medical treatment violates the Hippocratic oath. Heather’s life is shattered as a result. After the doctor terminates the relationship, Heather begins research for her own healing, and armed with this information, she initiates a civil lawsuit. Although it is a work of fiction, A Medical Affair was extensively researched. A Medical Affair is a critical book for women who want to make educated decisions regarding their relationships with their doctors.

Anne McCarthy Strauss is a versatile writer, researcher and public relations professional. She is also an avid supporter of victims’ rights. She has spent the last decade educating women and men on the seldom revealed but all too frequent occurrence of affairs between doctors and their patients. Her novel, A Medical Affair, is the story of a doctor who violates a sacred trust by having an affair with one of his patients. A lifelong New Yorker, Anne lives on Long Island with her husband and their two Cavalier King Charles Spaniels. The mother of one son, she has written for both consumer and trade magazines including Old House Journal, Waterfront Home & Design, Design Trade Magazine, Design New England, Distinction, Log Home Design Ideas and Florida Design Review. She has been a regular contributor to Martha’s Vineyard Magazine and Vineyard Style. She is a member of the American Society of Journalists and Authors (ASJA). Visit her at www.annestrauss.com.

I have heard stories – both from friends and in the news – about medical doctors making passes at their patients. The tales range from inappropriate touching during examinations to full-fledged affairs. Realizing there was something inherently wrong with this dynamic, I began to research doctor-patient affairs. I learned that such affairs are the ultimate violation of the Hippocratic Oath to which all doctors pledge to do no harm. If a case is reported and found proven to be true, the doctor can lose his license. And, in nearly half of the states in the U.S., a doctor having an affair with a patient is considered to be a criminal act.

“Any changes in your routine during the past few days?”
“Well, I moved.”
“New condo?”
“Yes, it’s on West 79th.” Am I bragging?
“Nice neighborhood,” Dr. Davis acknowledged. “So nice, in fact, I bet the superintendent made sure the condo was freshly painted for you.”
“Of course,” she said, her shoulders relaxing. “They even let me pick the colors. Chocolate and celery. Food colors.”
He looked at her quizzically, his eyebrows raised, revealing a trace of where the lines would etch his forehead in years to come.
What are you waiting for me to realize?
“It’s not about the colors, Heather,” he finally said. “It’s about the paint.”
“The paint?”
“Environmental asthma,” he said. “You’ve got a classic case.”
“Oh, no! What does that mean?”
“It’s hard to say,” he acknowledged. “The problem could become chronic. Or you may never have another attack again. Most likely, it’ll be something between the two. If you’re exposed to an irritating agent, something like paint, you may experience another attack.”
An image of herself with plastic tubes up her nose and a tank on her back flashed through her mind.
“Your asthma can be controlled with medication,” he said. He pulled a prescription pad and a pen from the pocket of his blue scrubs and scribbled as he spoke. “I’m writing you a prescription for the albuterol you’ve just learned to use.”
“I’ll be breathing into it constantly!” she protested.
“That one is a test kit. There’s very little medication inside. We’ll start you on a daily dose, but we may find you’ll need it less often.”
“I may not need it?” Her voice lifted.
“Hopefully, you won’t.”
“I’ve got to go to work,” she said, glancing as the circular clock on the green emergency room wall ticked off the seconds. Ten minutes to five.
“Not today, you don’t,” he said. “Today, you rest.” He handed her two prescriptions. “The hospital pharmacy will fill these. Use the albuterol four times a day for three days. After that, use it only if necessary. I’m also giving you Pulmicort to help prevent attacks. ”
She laid the prescriptions on the crinkled paper that lined the exam table and took another hit from the test kit. “It’s OK to go back to your condo, but keep the windows open,” Dr. Davis continued. “Is there someone at home to be with you?”
She shook her head. “No. I’ll be fine.”
“Is there someone you can call?”
“Sure.” She nodded.
He looked at her quizzically. “I’d like you to schedule a follow-up appointment at my office,” he said. He pulled a business card from the pocket of his scrubs. She glanced at the raised lettering. Jeffrey H. Davis, M.D., Upper East Side Pulmonologists, 204 East 79th Street, New York, NY 10021, 212-555-1300, it read. Impressive.
“I’ll be away for the next week,” he said. “If you have any symptoms, call my office. I’ll make sure one of the other doctors sees you right away.” He cleared his throat. “Otherwise, come in after June 7.”
“Do you think it’s OK if I wait until you’re back?”
“It should be OK,” he said. “Just keep your windows open until the paint smell goes away. But this being New York, there are plenty of other allergens that could trigger an attack.”
He reached toward her shoulder and gave her upper arm a reassuring squeeze. His strong hand snagged her hospital-issue gown and grazed her skin. Immediately, he returned his hand to the part of her arm that was draped by the gown.
“What’s that?” he asked, glancing at her wrist.
“My rosary. It makes me feel safe.”
“Whatever gets you through the night,” he said with a smile.
Slipping her arms behind her back, she clasped her hands together. “Thanks, Doctor…for saving me…from the attack.”
“That’s my job—it’s what I do.” He hesitated a moment before adding, “I’ll always keep you safe.”
When he turned to walk away, his blue scrubs, dampened with sweat, clung to his broad shoulders. The slacks hugged the curve of his perfect ass. When does a guy with his schedule find a chance to work out? she wondered, taking in the view.
*****
Back in her condo, Heather mentally replayed her emergency room visit dozens of times, recalling every detail. Except one. She couldn’t remember if the doctor had worn a wedding band. Why hadn’t she noticed? It was usually the second thing she noticed about a man, right after his eyes. Or the third—right after his ass.