You are here: Products A Lady’s Delights by Karie S. Adair 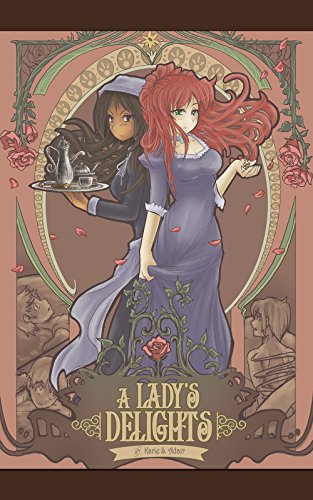 On the outskirts of the capital of Angliea, the young, proud aristocrat, Cassandra Selby, is the sole living heir of her family’s estate. Cassandra’s secured her home and her wealth from being seized by the powerful banker, Violette Wilemere, through a forbidden dessert: shrunken human beings!

Cassandra’s lust for her servant Estelle, though, threatens to unravel her into madness, and Violette would love nothing more than to leave Cassandra penniless and control her shrunken delights for herself. Will Cassandra find love and fortune, or will the very thing that keeps her from debtor’s prison be her undoing?

Born in 1985, Karie grew up just outside downtown Philadelphia. A landscape of rowhomes, city playgrounds, and a century-old Catholic church and schoolhouse served as the backdrop to her life's own story.

After moving to Murfreesboro, Tennessee in 1999 with her parents and sister, Karie went on to graduate from Riverdale High School and Middle Tennessee State University. She now works as a technical writer and graphic designer, as well as working on her writing in her spare time.

Karie is married to her wife, Manda. They live together with their cat, Sabrina.

I wanted to write a tale of romance between two women, and set it during a historical period. Something about the Victorian era, with its prim propriety and deeply buried undercurrents of properness, classism, and Orientalism seemed like an interesting and complex backdrop to set a tale in.

Combine that with a fascination with people being changed in height, one with the horror and awe of being swallowed alive, and the dynamics of a relationship between maid and mistress, and I felt I had the ingredients for a perfect story.

Be the first to review “A Lady’s Delights by Karie S. Adair” Cancel reply