You are here: Products A Knight of Change by adrian maudling 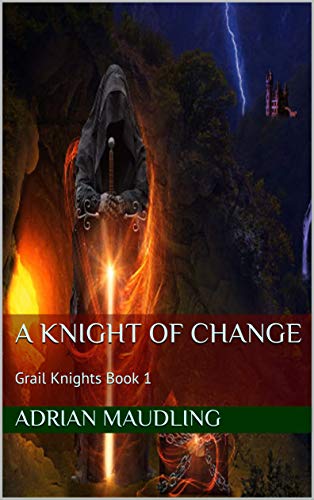 A Knight of Change by adrian maudling

So a Knight a Druid and a bunch of Fae beings go into a bar. Sounds like a good joke?
Unfortunately Mark and Allison are not laughing as they are dragged into the conflict between light and dark. With no idea which side is which.
They have been gifted with the ability to control the Elements? Fire, Air, Earth and water bending to their will. That’s the power wielded by the Grail Knights. And they have been drafted
New abilities, new friends and new truths. Can they master their abilities and accept all the changes that come with them?

Well I was born in Colchester in 1970 and have lived in East London and South East London. I eventually settled in Norfolk and I’m still here to this day.
I have been a lover of Fantasy and Science Fiction since i was little and that is where I have always set my ideas for stories.
Most of my character for the Grail Knight series were developed as a modern day set Roleplaying adventure which me and some friends played when we were younger. I realised the adventures we would create were just played out stories and eventually I started to write ideas down more for reading than playing.

I love Fantasy and Science Fiction and I am an honorary geek.
Over the years I played self created modern fantasy games based around D&D rules and realised we were creating stories each time we played.
I eventually decided to tweak the stories and characters to make a hopefully readable story

She stalked down the street, crossing from shadow to shadow with fluid grace. The black leather trousers and jacket made her virtually invisible. Her red hair was short. When the moonlight shone on her hair, it flared like a flaming ball travelling along the street.
The figure cut along the alley, pausing to turn down the next street. She knew the safe house was near, but the pursuer had tracked her all night, and she doubted she was in the clear. Pausing in the deep shadow, she watched for any movement. Once she was confident, there was no apparent threat, she carried on. Zigzagging through the alleys and streets hoping she had lost any pursuers. About 5 minutes from the house she halted again, and once she was sure she was alone, she started off. Already looking forward to the hot meal and bath she could indulge in once the pursuit was over. She turned and unexpectedly they were there in front of her. She gasped as the blade slid into her and she sagged to the pavement.
I jumped awake to the sound of a woman screaming then realised it was my shriek.
I quit the howling as I heard footsteps pounding down the hallway and the door burst open to reveal my sister Allison. Her red hair was all over the place, and she fixed me with a piercing glare. “okay why’s the girl screaming? And, where is she?”
“There is no her. You heard me shout I was having a nightmare okay?” I declared indignantly while struggling to sound gruff.
Allison smirked “no that was a screech, and in truth, I had a dreadful dream as well, but you don’t hear me shrieking,”
“Well, your dream was undoubtedly not as scary as mine then was it.” I got up and pulled on my dressing gown over my pyjamas “I dreamt someone was chasing mum.”
“And they stabbed her!” Finished Allison.
“Yes, she had short hair, leather jacket and trousers.”
“She was trying to escape the assailant that was pursuing her. She was trying to get to safety somewhere in London.”
I gave Allison an amazed look “yes and how did you know she was in London?”
“easy there was a bus at the end of the street she fled down, and I think I glimpsed the Shard in the distance.” Answered Allison
I hadn’t noticed either point, but Allison was always more perceptive
“so, do you think it’s the twin thing, us sharing the same dream?” I asked
Allison shrugged “I’m not sure it was a dream. It seemed so real.”
“but mum died years ago Alli. Either it wasn’t her, or it was a dream.”
Allison peered at my face, and I wondered if I’d got something on it.
“okay when did you start wearing coloured contacts and why do you only have one in?”
“don’t be stupid I don’t wear contacts. You know I hate anything near my eyes.”
“well you have one green eye and one blue, so you tell me?” said Allison as she gestured to my eyes.
I looked in the mirror and hesitated, damn she was right. How the hell had my eye changed colour?