You are here: Products A Killer’s Role: Erter & Dobbs Book 1 by Nick Keller 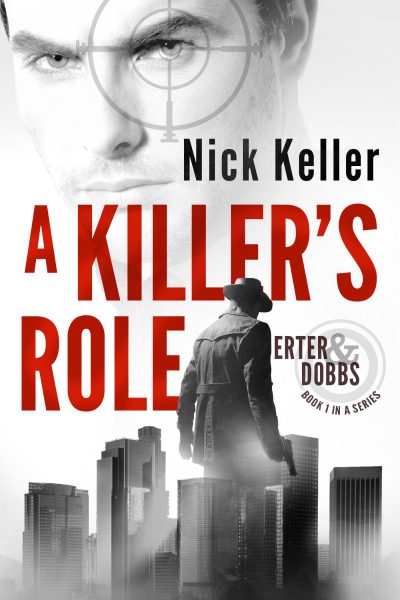 Two unlikely partners join forces to hunt down a psycho who likes to view L.A. through a sniper scope. But first, they will have to confront their own personal demons and come to common ground, in a race against time that could bring the whole city to its knees … especially once they become the target.

Nick lives in the DFW area where he went to film school and often finds himself performing in local theater. He is a father, son, brother and friend to an eclectic lot of humans, many of whom end up in his books … some the comedic sidekick, others the villainous bad guy.

Still, it didn’t make any sense for that limousine to be pulling up to that particular apartment complex at nearly midnight. It was too late. What was it doing here? Something was suspect. Limousines never came to this part of town. Not at this hour. Not unless something was about to go down. Not unless the shit was about to hit the fan. It made Bernie Dobbs grumble as he watched through his binoculars.

No one ever had to tell him how bad East L.A. was. Crime was rampant. Ethnic groups created a diversified stew of cultures that clashed along traditional barriers, all of them creating a dangerous recipe of hot blood, sometimes cold blood. Everything looked run down in parts—buildings all crammed in together along the main roads making a twisted monopoly board of abstraction. Graffiti spread like mold on the cement divider walls and slew across the underpasses to the tune of some criminal artist’s mind.

In the eighties it was all gang banging. In the nineties it was all pop crimes and hip-hop murders. In the aughts it was just random violence.  But Bernie was an East L.A. Lifer. To him, these hard streets were home. He’d grown up here, gone to high school right around the corner—one of the big, cornbread fed white boys that mixed in well because of his dry personality, not to mention his sheer size. He stood six-and-a-half feet as a twelfth grader. Weighed a small ton, too.

Of course, back during the Rodney King riots of 1992, when loyalties were truly discovered and friendships were as threadbare as grandma’s wedding dress, he was off in college down in San Diego playing defensive end for the Trojans. Back then, he never bothered coming home. Why would he? The place was burning. He had other things to do, had his sights set on the NFL. Maybe it was a pipe dream. Dreams usually were, especially in this town.

He lowered the binoculars keeping the brim of his fedora pulled low over his brow and bringing a walkie-talkie up to his mouth. The limo stopped on the street and sat there for a few minutes. The apartment complex was a shabby, two-story dive with a rundown courtyard and a swimming pool—the kind that produced the occasional floater, some anonymous crack head that took a dive and never came up for air.

It was a broken part of town for a Caddy stretch-job. The back door opened and a man stepped out. Bernie sat up straighter, watching, waiting. The man had a pudgy round face and a body made soft through decades of five-star dining. He was dressed in an expensive suit, definitely not the Men’s Warehouse. This was Armani, or some other high-falutin’ bullshit tailor. Bernie could see the ring on his pinky finger from a block away, glittering under the night lights. Even on his way out of town, that man was dressed to the nines. It could only be one guy. Richard Rothwell.

“That’s our boy. Standby,” Bernie said into the walkie-talkie.

That’s why Bernie was here. He’d set the trap, and now he was going to take that sicko down. Rothwell was on the run. The man could smell the heat. His lawyers had advised him to leave town for a few days. He had to come back to his nest, get rid of some evidence. Time to burn him. Let someone else deal with the media stink.

Rothwell went into the apartment through the buzzer gate. When it closed behind him, he obviously didn’t notice the strip of Teflon tape they’d applied to the little magnetic lock to prevent it from locking back. Bernie put the walkie-talkie down, and grabbed the car radio. “Warrants Department, this is Dobbs. We got eyes on the suspect. What’s the status on that warrant, over?”

Bernie looked back up at the place across the street. Rothwell had disappeared inside. The limo still waited. Richard Rothwell was stupid to come back here. It was the thinking of a desperate mind. He should have known they’d be waiting for him here. Stupid asshole.

Bernie said into the walkie, “Team One, get the driver. Go.”

An unmarked car roared up the street sidling up next to the limo in a heartbeat, tires skidding on pavement. Doors flew open and guys got out, guns drawn. Bernie heard them order, “Don’t move, hands on the wheel!” Through tinted windows, the limo driver had his hands up off the wheel looking shocked.  Bernie nodded. Screw the warrant. The station would have to deal with that. He was out of time.

He accelerated toward the apartment complex, engine roaring, and came to a skidding stop at the gate. Another car met him there, nearly bumper to bumper. Bernie was out into the night in a flash, throwing open the security gate, entering the building and thundering up the narrow stairway. At the top, he peeked around the corner as two Boys-in-Blue came up from behind, stacked position, front-to-back, guns held close. He scanned the vicinity, “Let’s go.”

He took the hallway scanning door numbers. Found it. Room 213. He pounded on it with alarming volume and shouted, “Richard Rothwell, this is the L.A.P.D. We have a warrant. Open up!”  He waited, shifting eyes with the cops. There was no answer. He took a step back and hammered a foot into the door splintering the jamb away from the deadbolt. The two cops charged in, one to the right, the other left, securing the perimeter. Bernie followed, senses tuned.

The place was dank and dark, with a TV in the back room showering the place with a silent edit-paced strobe effect. They searched the place at gunpoint, the cops checking out the living room, then into the back room. Bernie scoped around and found nothing out of the ordinary. One of the cops shouted, “Detective.”

He went to the back room and found a bona fide, home-equipped video production studio—two expensive Cannon 1500 video cameras mounted on tripods in a two-shot position surrounding a bed, complete with children’s toys and sadomasochism devices. Bernie shook his head slowly. He’d never wanted to kill a man more.

“Sir,” the other officer whispered.

Bernie looked over. The officer held up digital CDs, each marked with a child’s name. Boys and girls, both. He knew these names—the names of victims.

A door banged shut out in the hallway. Bernie charged from the room, through the living room and back out into the hallway. He looked over at the next apartment unit. Looking back at him with horrified eyes was Richard Rothwell, half in shadow, terrified as hell. He took off shuffling like a duck-billed platypus for the far stairwell. Bernie stormed at him roaring in fury. Richard hit the top of the stairs as Bernie leaped into the attack lunge of an old, pissed off defensive end. The two went rolling down the stairs and onto the first landing, the surge of adrenaline protecting Bernie from any pain. Once their fall came to a stop, Bernie flipped him over, pounded him in the face with a fist and watched his expression go blank, eyes roll around and blink like pineapples in a slot machine.

And that was it: apprehension successful.

Bernie snared him by the collar, “You’re going down, ass—huh?” He pulled back horrified. This guy was a full two decades younger than Rothwell. He threw him down.  A decoy.

The other cops showed at the top landing looking down. One of them groaned, “Oh shit, sir.”

Be the first to review “A Killer’s Role: Erter & Dobbs Book 1 by Nick Keller” Cancel reply