You are here: Products A Hard Days Night by Greg Godek and Anastasia Winters 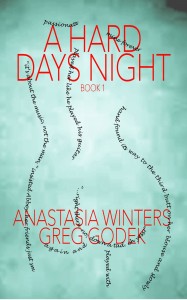 A Hard Days Night by Greg Godek and Anastasia Winters

“A Hard Days Night” is the first in a series of erotic romances from the only male-female writing team in the world of romances. Bestselling expert of non-fiction romantic advice Greg Godek (“1001 Ways to be Romantic”) joins newbie writer and quiet-but-naughty recluse Anastasia Winters to create erotic romances that are sexy, sassy and classy. (“A Hard Days Night” is NOT about The Beatles, but it IS a rock ’n roll romance!) Freelance writer and aspiring romance novelist Abbey has a quiet, satisfying life with a loving, lovable, gentle boyfriend. Her one passion is the music of bad boy rock star Maxwell. The power and poetry of his songs resonate deeply with Abbey. She had fallen for him (“Um, for his music!” she insists) ten years ago, when she was just seventeen. And nothing had changed in the intervening ten years. Abbey and Maxwell had a unique relationship. One that he was totally unaware of. One day Abbey receives an unexpected gift that brings her face-to-face with the man of her dreams…Maxwell. He has everything a man could desire: Fame, fortune, success and access to as many beautiful/sexy women as he could possibly want—yet something was missing from his life. Can a bad boy rock star fall in love with a good girl from Iowa? Can they overcome the obstacles and people that would keep them apart? Can two people from opposite sides of life come together and stay together?

Greg Godek has been been writing relationship books (advice for real life romances) for twenty years, and writing romances for a three. Back in the roaring 90s he wrote and published 1001 Ways to be Romantic. The stars must have been aligned because the book sold three million copies. He decided it was a good idea to undertake the biggest book signing tour in the history of publishing: Two years spent criss-crossing America aboard a custom 36-foot RV, visiting 43 states and 189 bookstores. Along the way he was invited to appear on Oprah, Donahue, The Today Show and Good Morning America. His advice and antics have appeared in The Sunday New York Times, The Boston Globe, Cosmo, Playboy, Reader’s Digest and The National Enquirer. Greg and Anastasia and are currently writing the sequels to A Hard Days Night and are toying with ideas for some erotic romance for men.

The incredible success of books like 50 Shades of Grey.

Maxwell and Abbey ran for their lives. Down the hall. A left then a quick right. Halfway down that hall, then a headlong leap through an open door. Into a supply closet. Slam the door shut. They looked at each other—and burst out laughing.
“God, he has a beautiful smile,” thought Abbey. “Huh! I don’t think I’ve ever seen a picture of Maxwell smiling.”
“What are we—”
“Shhhhh!” Maxwell hissed as he held up one finger and touched it lightly to her lips. They gazed into each other’s eyes. Maxwell’s fierce green eyes held her captive, like a cobra hypnotizing its prey. But never was there a more willing prey.
Maxwell moved his finger aside and kissed her. Abbey didn’t—couldn’t—kiss back. She was stunned. She was uncharacteristically passive. And she loved it. Abbey hadn’t known that a woman could be taken merely by the touch of a man’s lips.