You are here: Products A Gentleman’s Bidding by Jean Wilde 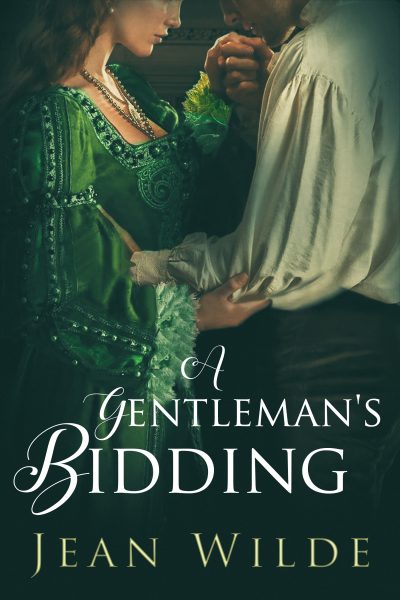 A Gentleman’s Bidding by Jean Wilde

Miss Emily Price is in desperate need of funds. With her family estate mortgaged and her young brother not yet of age, it falls to her to save her family from financial ruin. What is a lady with no title or connections to do? Auction her virginity at one of London’s most notorious brothels.

Heir to a baronetcy, James Hughes has always been caught between two worlds. His fortune and education help him pass for a member of the ton but his career as an engineer and his family ties stop him from actually becoming one. Quiet and serious-minded, he knows he needs to marry into the peerage for his sake, as well as, his family’s. But when he finds himself by chance at an auction in London’s infamous Scarlet Salon he throws his ambitions to the wind to bed the lovely Miss Price.

It doesn’t take long for Emily to lose her heart to her dry-humored, generous benefactor. But when their affair goes public in one of the most scandalous newspapers in town, Emily must decide if she must cast her feelings aside and leave James to pursue his societal ambitions, and James must decide if family and duty are worth giving up the chance of love.

Scandal, manipulation and ambition hinder the lovers’ path to happiness. Only they can decide if love is worth fighting for.

I'm a bookaholic, chocoholic, binge-watching Canadian author. I've loved books every since I was a child and fell in love with regency romances when my mother introduced me to the world of Georgette Heyer at the age of 12. My background is in journalism but I'd much rather write fiction than reality. A Gentleman's Bidding is my first novel and I've learnt so much going the indie route. I live in Toronto with my hubbie, 2 children and black Lab Loki.

I thought I'd write something that I'd like to read. I came upon an idea or rather a number of ideas and decided, "Why not write it myself?" The idea of The Scarlet Salon, the brothel that I've based the series name on was inspired by a real brothel in Georgian times called "The Nunnery" that I had read about. The idea of courtesans first captured my imagination when I watched a movie by Michelle Pfeiffer called "Cheri". It was a number of small ideas that I threw in together and created a story from.

“I shall check to see if my mistress is receiving visitors this afternoon,” the butler said as he closed the door to the lady on the doorstep.

To any passersby, nothing would seem outwardly unusual about a veiled widow calling at a fashionable house in London’s high-end Marlborough Street. But those more intimate with the neighborhood would know that this house was no simple lodging, but rather an elite brothel house catering to the rich and prosperous gentlemen of society, and the woman on the doorstep was no mourning widow.

Miss Emily Price shifted uncomfortably; self-conscious despite the veil that hid her face. Before she could question her resolve, the butler returned.

“Follow me, Miss Price. Madam will see you, after all.”

Emily followed the man into the house. Removing her veil as she entered, she was struck by the flurry of activity within the establishment. Maids bustled to and fro, arms piled with bonnets and pressed gowns as footmen polished silverware, pausing to glance curiously at the visitor. Emily ignored their stares and followed the butler to the back of the house to meet the infamous Madam Sophie.

Butler was not exactly how Emily would describe the large man escorting her. With his large frame and bald head, he reminded her more of a pugilist than a butler. She supposed it was fitting to have such an intimidating figure respond to callers in one of London’s most famous brothels.

Without knocking, the man swung open the door of what appeared to be a study and all but pushed Emily in, closing the door behind her. The room was fashionably and expensively furnished, but Emily didn’t notice much else as her attention was quickly claimed by Madam Sophie.

Over the past several days, Emily had conjured up several images of what Madam Sophie would look like. Most of these were unflattering visions of a large bosomed woman in vulgar clothing and several patches on her face.

The woman seated at the desk in front of her was anything but vulgar. Slim and dressed in a fashionable blue morning dress with her blonde hair stylishly pulled into a chignon, Madam looked like a lady greeting guests in a drawing room rather than a brothel owner. Age did not seem to have deterred from her beauty. Emily did not find it hard to imagine that this woman was once the most sought-after courtesan in London. Madam Sophie’s piercing gray eyes seemed to strip Emily and see straight into her soul. The infamous courtesan rose with practiced grace and an amused if not cynical smile to greet her young guest.

“Miss Price,” said Madam, inclining her head, “how nice of you to call this afternoon.”

“Thank you for seeing me, Madam,” Emily nervously replied. “I know I called with no appointment, but time is of essence and I wished to discuss a business matter of the utmost urgency with you.”

Brows rising, she asked inquisitively, “A business matter, is it? Why, I’m all ears. Pray, have a seat, my dear, and tell me what business brings you to my establishment.”

She motioned for Emily to be seated.

Seating herself, Emily cleared her throat. “I’ve heard, Madam, that your establishment is exclusive and only caters to society’s most wealthy and respectable gentlemen.”

“Wealthy, yes. Respectable, however…” Sophie shrugged. “I cannot vouch for their character. I have rules in my salon. If a gentleman follows my rules and pays what is required, then he’s always made welcome.”

“I’d like to enlist your services, Madam, to find a wealthy benefactor.”

Madam smiled. Emily was hardly the first nobly bred lady to show up at her doorstep destitute. Fallen ladies of society were what the Scarlet Salon was famous for.

“Miss Price, I have girls showing up on my doorstep every day looking for employment. You are prettier and more refined than most, and you’d probably take well to the gentlemen here. But competition is fierce, and alas for you I have enough girls working in the salon at the moment. I’m sorry, but I cannot assist you in this matter.”

“I have no intention of working as one of your regular girls, Madam. I wish to hire your services and of those in your employ.”

“My services! For what exactly?” asked Madam, intrigued.

“I wish to hold an auction.”

“Yes, Madam. I’d like to hold an auction for my virginity.”

Her earlier claim that the girl was pretty was an understatement. Looking at her closely, Sophie assessed the girl to be around twenty years of age. Her muslin dress was a pretty shade of lavender, although sorely out of fashion. She wore no jewelry other than a simple gold necklace. Her honey-brown hair was a rich, vibrant color, simply styled and pulled back from her face. Her complexion was clear and her figure, from what she’d seen when the lady entered, was nicely proportioned. But what was truly captivating about the young woman seated in front of her was her face. Heart-shaped with stunning green eyes, high cheekbones, a straight nose and full pouty lips. Now that was a face to launch a thousand ships, thought Madam.

“Come, Miss Price, you can’t be serious,” said Madam, not unkindly. “A lady of breeding such as yourself, and a virgin no less, surely you can find yourself a husband before the Season is out. Besides, you’re still young; if not this year, then surely the next.”

“I’m twenty-two years old, Madam. And although finding a husband may appear easy for a woman of class, I assure you it is anything but. Money marries into money in the ton. And, quite frankly, I have none. In fact, in the eyes of society I have nothing to offer a husband. No family connections, no dowry, and a lot of debt. Besides, finding a rich husband needs time and money. Two things that I can’t afford at the moment.”

Sophie did not pry further, the girl seemed clever enough. If there were any other means of securing funds through a wealthy relation or a friend perhaps, she would have already done so.

“So what is it that you propose?”

Taking a deep breath, Emily said, “I wish for you to auction me at the Scarlet Salon three evenings from today. I want you to invite your best clients, promising them an evening of entertainment and a chance to compete with their peers. The patrons don’t all have to be gentlemen of the ton, they could be up-starts or from the wealthy middle class. The more competition, the higher my price will climb.”

Biting her lip, she continued, “I also want it to be understood that I’m looking for a more lasting relationship with a benefactor, and priority will be given to the gentleman who wins the auction. I know, Madam, that you have the connections and resources to make such an event a success. You can make me into one of those women who can enthrall a room full of men. And you’ll know how to make sure there’s a large turnout for this auction. So given that we can both benefit from such an arrangement, how much would you propose to charge me for your services?”

“I’ve offered virgins to my clients before that’s nothing new… but never in such a public display as an auction.” Madam paused considering.

“I suppose the novelty of competing for a virgin coupled with your good looks and breeding would entice the men to bid high. Perhaps more than they normally would for an inexperienced lover. It’s an interesting proposal. One that would attract the kind of attention the Scarlet Salon is in need of during the Season. I’d agree to a percentage of the evening’s profits. The more money you go for, the better for the both of us.”

Nodding, the brothel owner continued, “I will take fifty percent of the evening’s takings.”

“Fifty percent!” gasped Emily. “Madam, that’s too much. That won’t leave me with enough.”

“Oh? I expect the gentlemen will drive up the bidding to five thousand pounds. Is two and one half thousand pounds not enough for your needs, Miss Price?”

After a brief hesitation, Emily held out her hand. “We are agreed, Madam.”

“We are agreed,” said Madam as she took Emily’s hand. “I shall have my man of business draft up the paperwork.”

Emily had the fanciful notion that she’d just struck a deal with the devil.