You are here: Products A Fated Exception by Kat Stiles 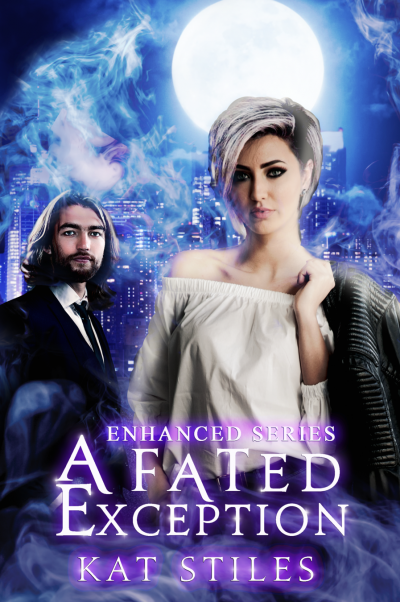 A Fated Exception by Kat Stiles

Cass is just a brilliant programmer to the outside world, a super geek paid millions to fix unfixable computers. What no one knows is she’s really a technomage – she has the ability to communicate with any program or machine through touch.

The world Cass lives in is one that fears her kind. She is one of a dwindling number of “enhanced,” people whose DNA was optimized at birth. Hunted by OCEI, an organization that will stop at nothing to eliminate the enhanced, Cass and other enhanced hide their abilities to survive. Relationships are forbidden—the chemical reaction of fluids exchanged with super-charged DNA can be deadly.

When Cass is called in to troubleshoot an unresponsive android, she makes an alarming discovery: humanity is on the verge of extinction. Her only clue is a sexy shapeshifter, Tyler, who sparks a desire within her she can’t control. No matter how much she tries to ignore him, she can’t deny the intense attraction she feels. But that attraction is dangerous, for both of them.

Can Cass discover the plan to wipe out humanity before it’s too late? And can she resist Tyler, or will her desire for him be her undoing?

Get A Fated Exception and 12 other amazing novels about forbidden love when you purchase the Playing with Fire box set for the special pre-order price of only .99 cents!

Originally a Jersey girl, sunny Texas is where I now call home, in a town way up north in the panhandle called Wellington. Along with the man of my dreams, I have two children: a rambunctious nine year-old girl and a sweet but vocal five year-old boy. Four cats, three dogs and an inordinate amount of pet hair complete my household. I write super-powered urban fantasy that’s sexy, fun and dark. For fun I like to read urban fantasy, horror, and existentialist fiction, as well as watch cartoons, movies, and sometimes even cartoon movies. I try not to take anything in life too seriously and I tend to smile often.

Super powers are my thing – every book I've ever written has multiple super powers in it. I've never written a technomage before, and it's a power I find interesting as I also work in technology. A Fated Exception is my first foray into a more sci-fi themed urban fantasy genre.

“Ms. Lexington, we require your services,” the voice on the line said, in a panicked tone.

The call wasn’t unexpected, after the Dynatech website had been hacked. There was a thread about it last night in my feed. I ignored it, hoping their staff would figure it out. Or pay the ransom, I didn’t care which.
After just getting back from a week-long stint fixing code in Redmond, I was exhausted.

“Ransomware?” I asked, suppressing a yawn.

“With a twist. If we don’t pay in the next 24 hours, they’re going to wipe our servers. All of them. We’ve confirmed the bug exists throughout our network.”

Likely an empty threat. But a billion-dollar company like Dynatech couldn’t risk it. Even with a redundancy setup, the time it would take to get up and running would be less than my fee.

The man on the line took no hesitation in agreeing to my fee. That made it abundantly clear that they had already exhausted all internal resources, and maybe even a couple of consultants, like me. I didn’t get many calls, but when I did, it was because no one else could figure it out.

“A jet is waiting for you at Newark Airport. Brandon will brief you on the way; a limo is outside.”

Damn, they must be desperate to have a car here already.

“Give me 15 minutes,” I said, and disconnected.

I wondered what time it was, as I yawned and stretched myself upright. My bedroom was devoid of any electronic devices, they were too distracting. Even with room darkening curtains, I knew by the headache that surfaced it must have been sometime in the early morning.

So much for catching up on sleep. But it wasn’t so much sleep as solitude I craved. Being around people takes a toll on any introvert, but for me it was much worse. My work required me to be onsite most of the time, and it was my least favorite aspect of the job.

After a shower and a strong cup of coffee, I was partially awake. I knew I could catch up on sleep on the flight—New Jersey to Atlanta was at least a couple of hours. What I worried about was staying awake for whatever Brandon had to say. Briefings just sucked, especially IT ones. If it wasn’t a dick-swinging contest on who knew more acronyms, it was a bunch of useless information.