You are here: Products A Dash of Destiny (Warlocks MacGregor Book 8) by Michelle M. Pillow 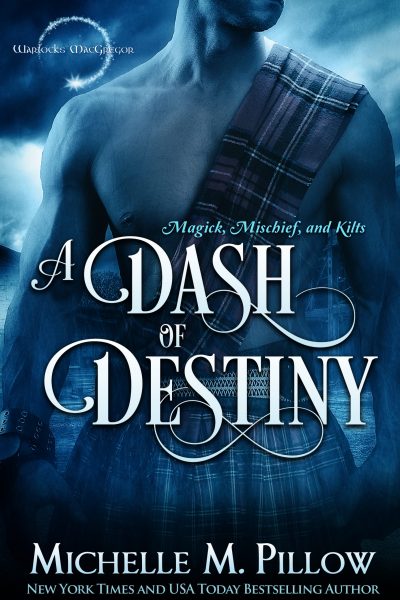 Scottish warlock Rory MacGregor knows something from the supernatural world is trying to kill him. He’s not sure exactly what that something is, but it’ll make for a fun adventure figuring it all out. Of course, nothing is simple, so when Fate tosses in a dash of destiny to keep him on his toes by way of an enchanting new arrival in town, he’s all in.

He just wished she was too.

Life hasn’t turned out as planned for Jennifer Greene. After taking care of her sick father for years, she’s come to Green Vallis, Wisconsin, for one reason only—a job. She isn’t looking for adventure, even if it’s by way of a tempting Highlander in a kilt or men streaking across the countryside. And she definitely isn’t looking for love—even though love is looking for her.

Michelle M. Pillow is a prolific NY Times & USA TODAY bestselling author with over a million books sold. Though she writes in many genres, she is best known for romance and mystery. Her rich world building creates portals for the imagination. She is a winner of the RT Reviewers' Choice Award. Fan favorites include the Qurilixen World (a multi-series collection) and Warlocks MacGregor series. She loves to interact with readers. Visit her at ➜ MichellePillow.com.

The MacGregors are all about family (and pranks). In a time when there is so much stress in the world, I like to create a place where readers can escape.

Rory MacGregor watched the muddy hand give one last twitch before the earth swallowed the woman whole. The stitch in his side from trying to push through the peat bog was nothing compared to the agony of defeat. If not for the fact he needed to catch his breath, he would have screamed. Instead, he tried to keep moving in the impossibly thick mud.

His efforts were futile. Rory was knee-deep and sinking. Only too late did he realize his warlock magick was useless in the enchanted trap. For the moment, he was like any other human, imprisoned inside the knowledge that death came for him—in slow, descending inches.

He reached his hand into the bog, feeling around in a desperate attempt to grab hold of her even though logically, he knew she was too far away. He shivered at the cold pressure against his naked legs. The smell of the decaying plant life stirred each time he slowly tried to lift his foot. This was not the first time he’d been stuck in a bog, but it was the first time he couldn’t quickly maneuver his way out of it.

Rory knew he should back up, but he tried to take a step forward instead. Her eyes, the same dark color as the land that consumed her, had pleaded with him for help. Maybe if he reached her, there would still be time. The bog refused to release his legs.

Rory glanced around the flat landscape, stretching his neck to see behind him. He caught sight of a figure along the edge of his vision. He tried to twist farther, but the movement caused his body to sink a little more.

“A woman went under,” Rory yelled over his shoulder as he pointed to the now-empty bog. “We have to help her!”

He tried to turn, stretching his waist as far as he could. Rory frowned. It was a young lad. A child couldn’t help him.

He again attempted to press forward to where she had gone under. If he could just take a few more steps…

“Get help!” Rory turned to glance back, only to see the boy coming toward him. He couldn’t be more than ten years. “No, stop. It’s not safe.”

“Stop. It’s not safe,” he repeated, switching to a local dialect. He had no idea how far he’d traveled inland. Ireland was not his homeland, and he did not know the terrain or how close he was to help.

The lad still came forward, his steps sure. The skin on his nose had peeled as if he recovered from too much time in the sun. His brown hair hung in long tangled strands and had not been washed in quite some time.

“Stop,” Rory yelled louder, waving his muddy hands for the boy to stay away. From what he could see, the child was alone.

Rory tried to force magick from his fingers to fling the boy back without touching him. Nothing happened.

Rory watched in horror as the lad stepped closer, waiting for him to sink. Miraculously, the ground stayed firm beneath the boy’s feet as he circled Rory. He moved as if the bog wasn’t waiting to swallow him.

“It’s not safe,” Rory insisted. He was careful not to move, not wishing to disturb the earth beneath the boy. “Get help,” Rory ordered. The child’s luck wouldn’t last too long.

The boy stopped behind him. Rory felt small hands on his shoulders. For a second, he thought the child was going to attempt to pull him out.

“Jenny Greentooth,” the boy whispered, jumping up to press all of his weight on Rory’s shoulders.

Rory lurched, trying to resist as he sank deeper into the bog. On reflex, he pushed his hands in front of him to counteract the attack. His fingers sank beneath the surface. The bog swallowed his waist.

“Och!” He grunted as the peat encased his manhood in its chilly grip.

Rory jerked his hands from the muck and slapped behind his back. The boy laughed as he let go, and Rory heard the child’s footsteps running away.

The ground bulged where the woman had gone under, rising and falling as if it breathed. With each lift it grew higher until the surface broke and a peat-covered hand poked through. Dirty fingers slapped the earth.

How was this possible? The woman should be dead.

A second hand appeared. Through the clumps of mud, he detected short claws. The woman pulled herself out of the bog. Though he could pick out small similarities, this creature was not the woman he’d seen disappear.

Peat-covered hair clung to her shoulders. Mud slicked her face and bony arms. A long hiss of breath left her mouth, showcasing rotted teeth marred with decaying leaves. A clump fell from her face, taking what should have been a nose with it.

“Ya must be Jenny,” Rory said, not bothering to hide his repulsion as the hag crawled on her stomach from the bog to move along the surface. He struggled to push out of the muck, but the lad had sunk him too deeply.

Jenny smiled, eyeing him like trapped prey she was ready to devour.

“Lovely day for a stroll, isn’t it?” Rory had charmed far dangerous women than her. He gave her his most winning smile.

The bog witch’s voice crackled an undistinguishable answer. Apparently, his charms were lost on Jenny, and she continued toward him.

“Och, this is going to be a tough one,” he muttered, unsure what he should do. Panic began to fill him. Without magick he was helpless, and he knew there was no easy escape from Jenny and her enchanted bog.

Be the first to review “A Dash of Destiny (Warlocks MacGregor Book 8) by Michelle M. Pillow” Cancel reply