You are here: Products A Dangerous Man by Rachel Cade 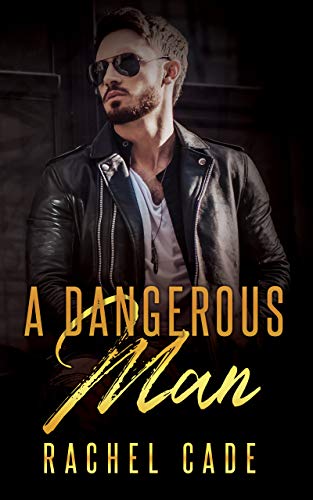 A Dangerous Man by Rachel Cade

Let’s embrace the point of no return.

Ciara Kimball’s privileged life seems to be crashing around her. Everything’s out of control and it’s about to get worse.

Jack Turner is in complete isolation in the backwoods of Maryland. The silence and the trees don’t bother him – people do. Fortunately, he’s an expert at taking them out.

The adventure begins on a hot day in August, when a D.C. socialite crosses paths with a 6’5 drifter.

I got an idea in my head that I wanted to write a story about a woman who's car breaks down and she ends up getting lost. Her only help turns out to be this mysterious stranger. The story continued to grow and things just got crazier. So now here it is.

Now in front of the dilapidated brick building, she realized it was a garage. The two large doors were pulled open, the sun’s place in the sky setting the room inside in shadow. But the tail end of a rusty sky blue pick-up truck stuck out.
Ciara stopped in her tracks, adrenaline pumping hope and trepidation simultaneously through her veins.
“He – hello?” Her voice came out a croaked whisper. She cleared her throat before repeating herself, eyeing her surroundings warily.
Several minutes passed and there was no response. She sighed hard, wiping her sweat stained brow with a damp hand. No one was here. She was going to have to go back to her car.
But she had to at least see if there was something here that could help her. With hesitance, she moved closer to the garage.
The smooth surface of the cement floor felt odd after hours of trekking across dirt and rolling pebbles.
It was probably pointless, but she moved her hand along the wall, hoping for a working light switch. Her foot hit something, followed by a loud noise of metal crashing against the floor.

Her heart followed suit. She reached for her chest to catch her breath. Shortly after there was another noise behind her, a loud boom she knew she hadn’t caused. Nothing registered in her brain as her heeled feet scrambled for the exit.
Had she heard mumbling?
Once she was a safe distance away from the building, she turned around.
A shadow lifted from the darkness of the garage, and as it came closer to the light, Ciara was tempted to run for dear life back down the road.
Swallowing, she instinctively prepared to ditch the shoes if she had to.
“What the hell?” the man grumbled like he was waking up. Ciara had no idea what she was expecting, probably anything but the huge man that emerged. He must have been a foot taller than her. He was shielding his eyes from the sun, but she knew he was watching her.
“H – hi.” Ciara clenched the keys in her hand, staring across at the man covered from head to toe in dirt and oil.
He lowered his hand from his eyes and stared at her; a very unwelcoming scowl marred his lips.
The stranger offered no greeting in return.
Had he been sleeping in the garage?
Ciara unclenched her jaw. “I’m… really sorry to bother you.” As she spoke, her eyes traveled down the length of his torso, past the grimy t-shirt and jeans to see he was holding a large wrench in his hand.
“My -” her voice cracked. She cleared her throat before trying again. “My car broke down.” She halted herself from saying anything more.
The wrench never strayed too far from her line of vision, even as he scratched his face with his forearm. The action caused the sun to catch his cropped dirty blond hair.
The arched soles of her shoes sent a spiking pain up her legs, causing her to wince and shift her stance. “Would I be able to use your phone to call for a tow?”
“Where’s your car?” It wasn’t a polite request as he finally looked up. The gravelly pitch of his voice sent a shiver down her spine.
Ciara swallowed, “Way – way down the road.” She lifted a weary arm to point in the direction she came.
He glanced in that way and silently scoffed. She didn’t want to do anything to raise his annoyance.
“I just need to call someone to tow it,” she stated.
“Yeah, I heard you the first time.”
His movement suggested he was in no hurry, turning his back on her to toss the wrench in the trunk.
She released a pent-up breath.
“I don’t have a phone.”
She blinked, needing a moment to register his words. “I’m sorry – what?”
“I said I don’t have a phone.” His tone wasn’t any nicer.
Ciara licked dry lips, which to her dismay, had captured dirt particles and Lord knew what else from her romp with nature. She wasn’t quite sure what to say. For a moment, she prayed he was joking, but if so, he had one hell of a poker face.