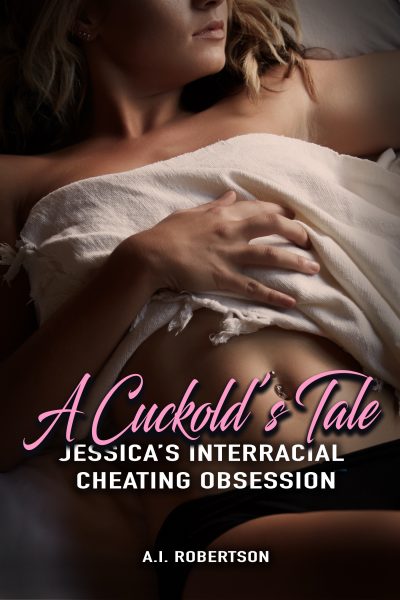 In the past, Frank’s wife Jessica had a thing for black men and shortly after they were married he caught her in the act of cheating on him in their own house. Even though it scarred him deeply he forgave her and they made it work. But now, years later the signs of her infidelity have returned.

The questions come at him hard and relentless. Is it all in his head or is there something to his suspicions? Is she cheating on him and if she is why does it make him feel more aroused than jealous? Why does he feel excited rather than hurt? Is it the end of their marriage? Or could it be the beginning of something more? Frank’s decision of whether or not to confront his wife and what comes later will change their lives forever.

A heated tale of an interracial cuckolding relationship and how one couple deals with it when their fantasies become real.

So what gets me going? What makes my clock tick, my pendulum swing, my muse to… continue… musing? If you're reading this, probably the same things as you. I like to delve into the seamy underbelly of romance and erotica. You can get vanilla anywhere, my stories come in all flavors. They go to places where we all go from time to time but never admit to going. I like to build worlds and situations for the characters in my head who want to be worshipped, adorned, obeyed and at times also owned and subjugated for our pleasure? Sometimes it isn't for the faint of heart.

The first chapter of this book actually happened to me. This story took a while to write. It was cathartic in a way. The cheating story that starts this book off is based on a true story. I am Frank.

“She’s cheating on me,” I said leaning forward so that only Paul could hear.

“What?” he said arching his eyebrows and staring at me; mouth ajar and questioning. “How do you know? Did you catch her or something?”

I knew telling Paul was a risk. Telling anyone was a risk, but I needed to talk to someone about it all and being my best friend as well as a gay man gave him a somewhat unique perspective. I trusted him implicitly. He’d also gone to school with my wife and I and knew us better than anyone. I’d invited him to meet me for lunch, so I could pick his brain and maybe also to just unload some of this weight I was carrying around with me. Like Mario’s Outdoor Cafe and Grill was some sort of gay confessional. I already felt better, and I’d only just begun with the opening bombshell about Jessica.

“Well… no, not exactly. I haven’t, but… well, let’s just say that I’m getting a vibe I’ve felt before. The signs are there. We have a history when it comes to this sort of thing.”

“You have a history? Ok Frankie, stop beating around the bush and just tell me what’s going on. I’m a big boy, give me all the nasty hetero details,” he said snickering and took a bite of his sandwich.

I sighed deeply and pushed my own unfinished meal away, steadying myself to tell the story I needed to tell.
“Back when Jess and I were first married….” I stopped. It was difficult to say what I needed to say. I felt the heat of embarrassment beginning to creep up into my face. I laughed nervously and drummed my fingers on the table.

“Jesus, Mary and Joseph… Frankie just spit it out. We only have an hour here you know.”

“Ok well, a few months after we got married I had gotten back into my gym routine…”

“Mm hmm, now you have my attention,” Paul said with a teasing giggle.

“Stop it,” I said rolling my eyes. “Anyway, one day when I got to the gym it was closed for remodeling. I’d seen the sign about it but had forgotten. I’d left Jess in bed asleep and decided I’d grab some coffee and a bagel and give her breakfast in bed.”

“So sweet,” he said patting my hand patronizingly.

“So anyway, once I got home I noticed her car had been moved and it’s front windows were both down. It seemed odd but my first thought, innocently enough, was that she’d woken early and had gone to get her own breakfast or something.”

“Oh my God, you walked in on her doing it, didn’t you?” He said placing his hands on his cheeks in an over exaggerated shocked expression.

“Don’t skip ahead. I know its cliché, but this is how it happened ok… You want me to tell you the story or not?”

“So, when I went inside there was no sign of her. I walked into the kitchen, the living room, the bedroom, nothing. Then I hear this thumping sound from the upstairs bedroom that we were considering making an office or a nursery whichever came first. Looking back on it, I was so freaking naive. I mean, again we were basically newlyweds and the trust in our relationship was still solid. I just assumed she was hammering nails to put up pictures on the walls or something.”

“Something was getting hammered,” he said under his breath. I shot him a look. “Sorry.”

“When I got to the bottom of the steps though, something kept me from going up. I heard Jess giggle and it sounded like she was talking to someone up there. Then the hammering started again and became faster. It sounded like the washing machine, you know like when it’s off-balanced or something. I yelled out her name, called to her and the hammering immediately stopped, and I heard her curse.”

“The rest of what happened is like…seared into my brain or something. She didn’t yell back to me, but I knew she’d heard. As I climbed the stairs I heard a flurry of rustling behind the door, then Jessica stepped out and closed the door behind her. Her hair was messy, and she stood there above me on the landing wearing nothing but a long T-shirt that barely covered her below the waist. From my point of view standing there on the stairs, I could just see her dark curly hairs. I’ll never forget the look on her face. It was surprise at seeing me there, of course, but there was also a hint of fear and maybe a little annoyance or anger. I remember thinking even then how pretty she was. And maybe I was in shock but the first real thing to catch my eye was how strange the combination of bed head and full makeup looks. Of course, I know now her hair wasn’t unkempt from sleeping.”

“‘What are you doing home?’ she’d asked. ‘Thought you’d be at the gym for a while.’ She came to me and put her arms around me hugging me tightly. I realize now the move was less about being affectionate and more about slowing me down and diverting my attention.”

“She’d only had time to throw on a t-shirt and get out the door before you got there? So, what happened then?” Paul leaned forward intent on hearing every juicy tidbit and detail.

“Well, so I might have been naive at first, but I wasn’t stupid. I pushed her away and looked at her questioningly. She had a hard time looking me in the eyes I remember. I went to move past her and put my hand on the doorknob. ‘Don’t Frank,’ she’d said. I asked her what was going on and she leaned in and kissed me. ‘I love you, you know that right?’ Her lips were warm. It’s funny, afterward I would think about that kiss a lot. ‘Just turn around and walk back downstairs. We can talk about it later, it’ll be ok. I’m so sorry Frank… don’t go in there though, ok.’ The pained look on her face is one I’ll never forget. Sometimes I wish I’d listened to her. That I’d just left and not seen what I saw. But my blood was boiling at that point and all I wanted was confrontation. I stepped back as if I was taking her advice then I pushed past her roughly and flung open the door.”

I picked up my soda and took a drink.

“Well?!” Paul yelled. “You gonna leave me hanging like this?”