You are here: Products A Christmas Romance on the Santa Express by Kate Harriet 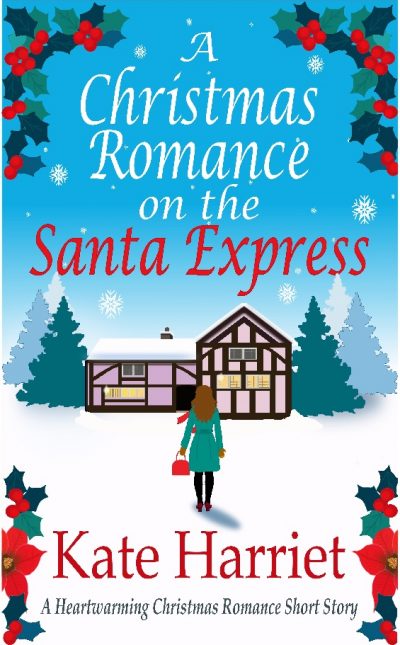 A Christmas Romance on the Santa Express by Kate Harriet

Christmas is coming and you’re looking for a sweet short story to snuggle up with on a cosy sofa, with a warm mug of hot chocolate. Or even on a long train ride home this season…

A Christmas Romance on the Santa Express is the perfect heartwarming short read for the festive holidays.

It’s Christmas Eve and head librarian Melissa Wright is travelling on the Santa Express to reconcile with her on-and-off again ex Alex. However when she locks eyes with a handsome stranger on the platform, he threatens to throw her plans off track.

Melissa and Daniel share stories over the traditional festive trimmings and Christmas crackers in the dining car, but before her journey ends she has a choice to make. Does she find romance with this charming new man or does she give into nostalgia and try yet again with her ex?

Have you ever thought this after reading a romance book?

• The only tears I want to fall after reading a story are tears of joy.

• I like books that aren’t too predictable and with strong character development.

• The whole novel had a good pace and was professionally written. Really satisfying.

If so, I’m Kate Harriet, full-time author and I write uplifting, cosy reads for fans of chicklit—with warm, loveable characters and a heroine you’ll want to root for.

As a fiction ghostwriter I have spent years writing for the kind of reader who loves a relaxing read, set in picturesque and idyllic settings with just a splash of romance thrown in.

If that’s you then click today to start reading fun, feel-good books, novels and short stories that will leave you smiling from ear to ear.

This story was based on a real journey on board a steam locomotive and is written for readers who enjoy a satisfying HEA or HFN.

SNOWFLAKES FLUTTERED FROM white skies on Christmas Eve, as Melissa Wright hurried towards the Shepherds Valley railway station. Huge clouds of steam billowed from the chimney of the Santa’s Express, while the jet black locomotive with its bright red livery waited at the platform like the Hogwarts’ steam train.
Melissa glanced at her watch: minutes to twelve. Still enough time, but all the carriages looked packed.
She headed through the holly-decked waiting room with its cosy fug of roasted chestnuts and the gentle crackle of its antique coal fire. She passed the festive choir on the platform as they sung Sleigh Ride, when three passengers headed her way. Had they already been turned back?
Please don’t let it be full, Melissa thought.
She spotted a volunteer guard dressed in seasonal uniform, but he seemed to be involved in a heated discussion with a tall man in his thirties dressed in a grey winter coat and dark scarf.
‘What do you mean there’s no chance of a refund?’ cried the man.
‘We need a day’s notice for cancellations,’ replied the guard. ‘So we can offer the Christmas Lunch tickets to someone else.’
‘But they’ve already been paid for!’
Steam hissed from the locomotive’s chimney. The guard glanced at his watch. ‘I’m sorry Sir, but you’ll either have to get on now or leave. The train’s about to go.’
‘Then I hope this ride’s over sooner than later,’ the man muttered.
‘Pleasant journey Sir,’ the guard replied then looked past him and straight towards Melissa.
The man turned to follow his gaze. His hazel eyes locked onto hers with the force of a thunderclap, but with a frown the stranger looked away and boarded the train in haste.
Melissa showed the guard her red cardboard ticket, ‘Well he sounded charming…’
‘Lucky I enjoy working here,’ replied the guard. ‘But I’m afraid all the carriages are full due to train cancellations. We’ve had to turn people away.’
‘Oh please,’ cried Melissa. ‘I’ve got an important meeting at Littlehurst.’
The guard sighed. ‘Go on then, there’s a spare seat in the dining car. Just buy a drink so they don’t turf you off.’
Melissa started to run. ‘Thanks and Merry Christmas!’
The guard blew his whistle as she climbed aboard an old-fashioned carriage, its ceiling strung with bright tinsel garlands. She squeezed between passengers along the side corridor, passed packed compartments and headed towards the dining car as the steam locomotive puffed its way out of the station.
But when Melissa opened the wooden door of the elegant carriage, she froze.
Every seat in the oak-panelled dining car had been taken—except the one where the ill-tempered man from the platform now sat and glowered at the menu on his table.
Great. He was the last person she wanted to sit with on such a long journey. And there was no way he would be happy eating his unwanted Christmas lunch with some completely underdressed stranger.
Melissa looked around the dining carriage but no-one else was standing, except for the waiters in immaculate white jackets. And if she stood at the bar she would look too conspicuous. Then the man glanced up from his menu to stare at her again and this time his frown deepened.
Startled, Melissa shrank back through the dining car door and pulled it closed behind her. As the carriage rocked she stood in the only space available by the train door, its window wide open. But as the locomotive rushed through the snowy landscape, freezing gusts peppered her face with snowflakes. She tried to drag the window shut but it soon stuck fast. Finally Melissa gave up and leant back against the wall as each lurch of the carriage threatened to topple her over.
As she clung to the carriage wall with numbed fingers, the dining carriage door opened.
‘Are you alright Madam?’ a man’s voice asked.
Melissa’s teeth chattered as she turned to look. The grumpy man had poked his dark-haired head through the doorway. Although he still looked serious, amusement now creased his hazel eyes.
‘I’m alright thanks,’ replied Melissa as melted snow dripped from her chin.
He raised a sceptical eyebrow. ‘You’re welcome to share my table, instead of being tossed about the train like a loose pea in a drum.’

He had seen that?

‘I don’t want to trouble you,’ she said. And besides, judging by its plush décor she couldn’t afford so much as a glass of water.
‘I’d be far more troubled if I left you standing out here getting blasted by snow, when there is a warm seat inside.’
‘I’m perfectly fi-,’ Melissa began when the carriage bucked and almost threw her to the floor.
The man raised both dark eyebrows.
Melissa smiled in embarrassment. ‘Thank you. You’re very kind.’
He shrugged. ‘Call it the spirit of the season or some such.’