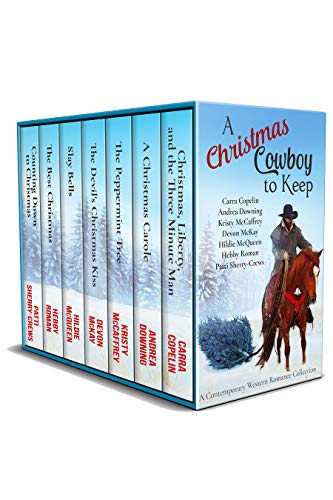 The weather is cold, the atmosphere is festive, and the cowboys are hot. How do you keep a cowboy at Christmas?

Don’t miss this holiday collection of modern-day cowboys and the women they love, featuring the same USA Today, Amazon Bestselling, and Award-Winning authors from “A Cowboy to Keep,” which garnered 55 reviews with an average rating of 4.5 stars.

A CHRISTMAS CAROLE by Andrea Downing
Carrie Matheson and her son are trying to settle into a new life in Wyoming. Tate Schrugge is trying to ditch his Scrooge and play Santa to the young boy. But will there be a Dickens of a romance by Christmas?

THE PEPPERMINT TREE by Kristy McCaffrey
Lawyer Skye Mallory returns home for the holidays due to an unexpected inheritance, and cowboy Joe Carrigan stands in her way.

THE DEVIL’S CHRISTMAS KISS by Devon McKay
When Kristen Kelly receives a Christmas kiss from Cole Lawson, she doesn’t believe it means anything. But Cole sets out to make things right with the woman of his heart.

THE BEST CHRISTMAS by Hebby Roman
All Sofia Rossi wants is to re-connect with her estranged son. But can Gar McCulloch, a handsome cowboy who runs a juvenile rehab ranch, be the answer to her problems?

COUNTING DOWN TO CHRISTMAS by Patti Sherry-Crews
Wedding planner Melody Evans views happily-ever-after endings with a skeptical eye. Veterinarian Leland Jennings IV thinks Christmas is for kids. Can the holiday spirit bring them together?

The best-selling, award-winning authors who gave you A Cowboy to Keep, are together again to bring you holiday cheer. Hebby Roman, Hildie McQueen, Devon McKay, Andrea Downing, Kristy McCaffrey, and Patti Sherry-Crews call Texas, Georgia, Ohio, Wyoming and New York, and Illinois respectively. They all write in the genres of historical and contemporary romance.

We had so much fun working together on the best-selling A Cowboy to Keep, the authors decided to do a holiday collection with cowboys, who we love so much!