You are here: Products A Change Would Do You Good by Pinar Tarhan 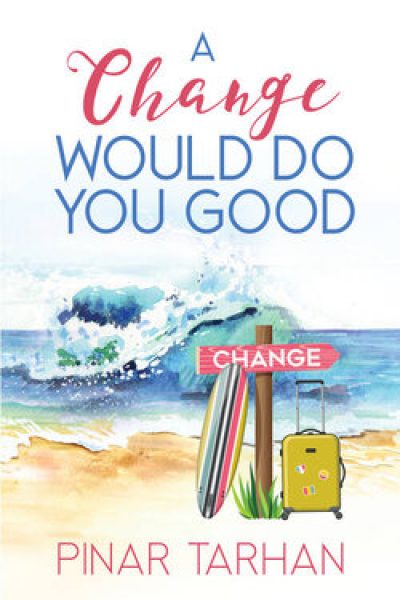 A Change Would Do You Good by Pinar Tarhan

Janie desperately needs a change, and she needs it yesterday.

Ever since her boyfriend died and their mutual best friends moved to Canada, she’s been lost and unable to enjoy life.

So she gets a new wardrobe, job, car, and place. In another city.

The new job and apartment are great, but her colorful neighbors will be a challenge to get used to:

– Agoraphobic Michelle and her car-crash happy son who is obsessed with curing his mom,
– Part-time model/fashion designer Ben who seems to be competing for the worst boyfriend award and his miserable girlfriend Linda who hates her career,

Luckily Janie has met Greg, a handsome therapist who might be the best friend a person can have. And her downstairs neighbor Kevin, a pro surfer with the looks of a Norse god, seems fun and friendly enough.

With all the antics and chaos going on, only one thing seems certain: Her neighbors provide her with more distraction and change than she was ever ready for, including an epic romance…

Pinar Tarhan is a novelist, screenwriter, freelance writer, and blogger. She's been creating stories for as long as she can remember. She's always been fascinated by movies and rock music. She also loves dancing, traveling, beaches, and epic romances. These always find their way into her stories in the most entertaining and heart-warming combinations.

I've been writing for a long time, but my book was largely inspired by my time in California.

Janie sat in her therapist Dr. Lucia Lopez’s office for the twenty-seventh time. She had been seeing her for about seven months.
Eight months ago, her boyfriend Lenny had died. Seven months ago, to add insult to injury, her two best friends Sarah and Andy had moved to Canada. That was when Janie knew she wouldn’t survive this without professional help.
It was the right call. They had talked through her pain, as well as feelings of abandonment and betrayal. Who would move abroad when their best friend was mourning the loss of her boyfriend? He had died two days before her thirty-fifth birthday. And a few weeks after his.
But, of course, it wasn’t that simple. Sarah and Andy weren’t just Janie’s best friends. They were also Lenny’s. Not that grief was, or ever should be a competitive sport. If it were, they would all probably be sharing the medal for first place: Sarah and Lenny had met when they were in diapers. Literally. Their parents were neighbors and dear friends. Luckily for them, their kids — both only children — had taken to each other immediately. Sarah had been inconsolable when Lenny’s father took a job in New York; they were in ninth grade. That’s when she met Janie.
Andy was Lenny’s college roommate. The two bonded over their dream to become Formula 1 drivers and realized it together.
Lenny had introduced Sarah to Andy, and after their move back to LA the four of them had been inseparable. Lenny was a close friend for years before he and Janie started dating.
Yes, the three of them were in immense pain. The difference was Sarah and Andy had each other. And Vancouver had them.
To be fair, Janie did see the appeal of making a new start in a new environment. Yes, she still felt a bit let down. But she was no longer angry with her friends. Talking things through with her therapist had helped immensely.
Lopez observed her patient as Janie studied the beautiful scenic photos of San Diego sprucing up the walls. She was particularly drawn to the blue-dominant one, where high, wild waves crashed onto the golden beach sand.
“Ever been?” Her therapist asked.
“When I was a kid. We vacationed there a lot. It was lovely.”
“Still is.”
Janie could hardly look away from the pictures. She was thinking. Planning. “I never went there with Lenny.”
“Might be just what you need to start over,” her therapist prompted.
“I turned down a job there a couple of weeks ago. Loved the firm. Loved what they offered. But I wasn’t sure I could handle such a huge change.”
“And now?” Janie leaned back and smiled. Her therapist continued. “Being the new person in an environment can provide a lot of distraction. And I definitely encourage you to go out and meet as many new people as you can. Still, never hurts to have someone you can call.” Lopez picked at the neatly stacked Rolodex on her desk. She searched a bit before she found the name she wanted. She took the card out and handed it to Janie. “Greg’s a good friend of mine from school. He’s a therapist himself, but he works for a corporation.”
Janie threw her a curious look.
“I’m sure he can recommend a few decent local therapists should you need one, but I’m really just giving you the number of a friend. He can show you around. Introduce you to people,” the therapist explained.
“Won’t he be weirded out? Me being your patient?”
“Janie, you’re just going through a tough time. And honestly, I think you will hit it off.” Janie looked horrified. The therapist laughed a little. “Relax. I’m not matchmaking. I know you’re not ready to date again. And Greg is seeing someone. But he makes a damn good friend.”
“Thank you,” Janie said gratefully.

Janie wasted no time calling Greg when she went home. If she were going to change cities, she might as well start making friends. He sounded even more pleasant than described.
She made her second call to Ellen Parker, the head of the San Diego fashion design firm who had offered her the job.

*
Janie was in her bedroom, hastily packing the remainder of her wardrobe into the suitcase on her bed. She wanted to be out of there like yesterday. Her older brother Peter sat next to the suitcase, disapproving, which was his default mode. Janie kept ignoring him. That was her default in their relationship. He’d never change. And on the plus side, he couldn’t stand being ignored.
Janie looked at her almost full suitcase, and then at the other fully-packed carry-on on the floor. Her closet was far from empty. Peter read her mind.
“That’s what happens when you shop non-stop for three weeks.” Peter pointed out the obvious. Janie kept packing. “You don’t have to do this, you know,” he pressed.
She went into the bathroom. The moment she was out of sight, Peter unzipped the suitcase on the bed and threw the clothes back into the wardrobe.
Janie returned with her toiletries and saw Peter unpacking. “What the hell?” She darted to her bed, pushing him aside. She dumped the toiletries on the bed and quickly recovered the items from the wardrobe, throwing them back into the suitcase until it couldn’t take any more. Then she zipped it shut with one swift, angry pull.
“Hey, take it easy. You know I have nothing against you moving on. But transforming your whole life to do it?”
“Remind me, when did the love of your life die?” She lifted her suitcase from the bed and put it on the floor. She dragged the carry-ons as she exited the room.
Peter followed her outside. As soon as he saw the new red Chevrolet Camaro parked in the driveway, his eyes almost left their sockets – cartoon style. “What was wrong with your perfectly normal car?”
Janie just placed her suitcases in the trunk and shut it. The backseat was full of photo albums, DVDs and CDs.
“Do you have any savings left at all? And why are you still traveling like it’s the 90s?”
Janie smirked at the question. Peter looked like he might have a heart attack soon. She got in the car and closed the door. She took out what looked like a brand-new phone from her bag, gestured him to call her and drove away.
Peter frowned, then instinctively fished out his phone to test his theory. He dialed Janie’s number. No longer in use.

Janie sped away in her convertible. Her car’s speakers blasted AC/DC’s Highway to Hell for good measure. She smiled as she mouthed the lyrics, ironically feeling like she was escaping hell.

Janie looked out of the window of her new fourth-story apartment. She could see the beach down the road. On quieter days, she bet she could hear the waves splashing on the shore.
The neighborhood was stunning with just enough colorful buildings. Not too crowded. The tallest ones had five or six floors at the most, giving everyone space to breathe.
The inhabitants were intent on making the most of the beach. People who lived here weren’t exactly rich, but they didn’t have money problems either. Not that Janie cared about that. It would just be nice to hit Peter with the facts when he started nagging that she’d downgraded her life somehow.

A couple of hours later, Janie sat on her sofa and took in her spacious two-bedroom apartment. It was modern and vibrant without being too quirky. It was completely her. She had only a few boxes left to unpack. She smiled to herself, dialed her mom on her cell and left a message.
“Hi, mom. Just calling to say I’m almost settled. This place is amazing. Remember, you can’t give this number to Peter. Or my address. Not yet.”
She hung up and dialed Greg. Got his voicemail.
“Hey! You were right. This place is something else. Thanks for everything. Let me know when you want to meet up.”

Past midnight, Janie was sound asleep in her bed. Suddenly, loud hardcore metal music with brutal vocals blasted from downstairs and jolted her awake.
“What the hell?” she yelled and tried to go back to sleep. She buried
her head in her pillow. The music continued. Frustrated, she took her MP3 player from her top night table drawer. She put her earphones on. Before she could push play, she heard the loud crack of a gunshot. Then another.
Shaking off her initial panic, Janie dialed 911.