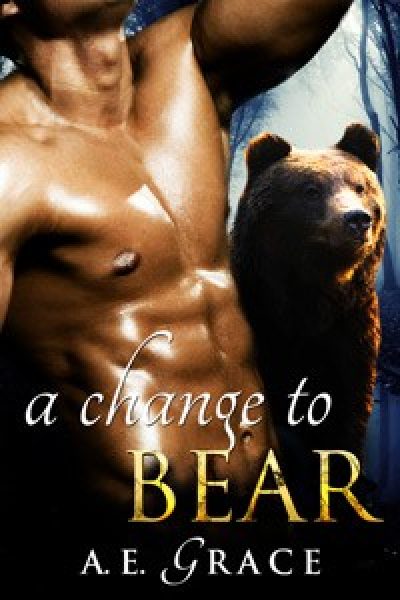 Curvy Terry Spencer never expected her travels to take her to Liam, a darkly handsome and broody man with a body to die for. He devours her with his eyes, and he so obviously wants her, so why is he holding her at arm’s length?

Bear shifter Liam is being hunted by a savage wolf, and he can’t form any attachments. He’s already lost everything… he can’t risk losing more!

But when he lays eyes on the curvy Terry Spencer, his senses are left reeling. She’s got a delicious scent, a beautiful face, and a gorgeous body that he wants to claim as his and his alone. To say he’s falling head over paws is an understatement.

When the vicious wolf makes Terry his prey, Liam is ready to sacrifice everything to save her, to save their fated love… to save his fated mate.

“What did the shifter carpenter say to his customer?”
Liam grinned. “I don’t know. What did he say?”
“I built this with my bear hands.”
“Oh God,” Liam said, shaking his head. “These are unbearable.”
“How did the bear get elected into office?”
“How?”
“He was a pander bear!” Terry giggled, and she held onto his hands which he had wrapped around her waist. They had walked lazily back to the guest house after dinner, and were now lounging on the sofa, watching television they couldn’t understand. It was some kind of game show where contestants had to perform a variety of different dares to progress to the next round.
“Wait, I’ve got another one. What was the brand of the bear shifter’s PDA?”
“No idea.”
“A Blackbeary! One more, just one more. Hmm hold on, let me think.” She shook her hand in front of her, trying to conjure up yet another pun. “Here’s one I think works. What did the bear shifter critic say about the Hollywood blockbuster?”
“Here it comes.”
“The plot was too bear-bones!”
“Ha,” Liam said, laughing. “That’s not bad. You come up with them fast.”
“I used to edit for magazines, you know,” she said. “If we ever all had lunch together, it would always devolve into a competition to see who could come up with the best pun.”
“Sounds fun,” Liam lied.
“Don’t be such a sour puss.”
He kissed her neck, and she shivered, and he saw goose bumps prick up there.
“I had a great day, you know?” she whispered, pushing her head back into him. He brought his head over her shoulder, and bit her earlobe.
“Me, too.”
“Tam Coq was amazing. Are there more beautiful natural things like that to see in Vietnam?”
“You better bear-lieve it,” he said.
“See!” she said through a grin. “You’re getting it.”
“You like scenic stuff?”
“Oh, love seeing natural wonder. I imagined Tam Coq was like the Grand Canyon, just smaller and all green instead of orange.”
“It’s much smaller than the Grand Canyon.”
“There’s a place I’d like to go.”
“You want to travel around America?”
“Oh, yeah,” Terry said, nodding. “I mean, I want to do more of Asia first, you know, because it’s cheaper and probably a little more varied. But America is on my to-do list. Back in the sixties and seventies, it was a very English thing to road trip the United States. I don’t know if I’d want to drive everywhere, but I’d love to visit all the major attractions.”
“When I was last in America,” Liam said, “I went to northwest Montana, and it’s beautiful there. The mountains are just breathtaking. Beautiful lakes. Just picturesque.”
“Why did you go?”
“There’s a small population of brown bears living in what’s called the Northern Continental Divide Ecosystem, and, well, I wanted to experience life as my bear for a while.”
“You lived with other bears?”
“Bears are solitary, usually, unless it is a mother and her cubs. So not really, but I shifted, spent my time as a bear all my waking hours.”
“God, that sounds amazing.”
“It was interesting. But it only reinforced the fact that I am a human who can change into a bear, not a bear who can change into a human.”
“Did you run into any other bears?”
“Sure, I tracked one down.”
“How did it respond to you?”
“It knew something was different about me. It would not approach me, but did not leave, either. We sort of just looked at each other for a while.”
“It knew you weren’t the same? Not a true bear?”
“I think so, yes. My pheromones may be different, my scent, my mannerisms. Or maybe there’s just an instinct.” He shrugged. “I don’t know.”
“You know,” she said, rubbing his knee. “You’re getting more talkative.”
“I’ve been riding solo for so long,” he said, “Avoiding attachments.”
“So you’re just out of practice, huh?”
“Maybe. But I was never the life of a party.”
“Ha!” Terry cried, and she reached up and touched his chin. “You’re too broody for parties. But I don’t like parties, either, so I guess we’re good. I’m going to go wash my face and take a shower, yeah?”
“Okay.”
She got up off the sofa, and flicked him a smile before disappearing into the bathroom. He could hear the sounds of the sink faucet running, and then a short while later, the hiss of the shower.
He went to the bathroom, stood in the doorway and peered inside. The shower was the standing sort, with a glass divider, and it had all fogged up. Terry’s luscious figure was a blur, and she had her arms up over her head as she shampooed her hair.
Liam swallowed, and felt a tightness in his chest. He quickly pulled off his clothing, and Terry yelped when he stepped inside the shower, his manhood already at attention, and wrapped her up from behind, planting small kisses along the tops of her shoulders.
“Who said you could come in here?” she said, turning around in his arms.
He kissed her, claimed her lips in his. It was a slow, loving kiss, and their tongues danced and his heart raced and his mind whirled.
“I can leave if you like.”