You are here: Products A Chain of Flames by A. Blaine Cleaver 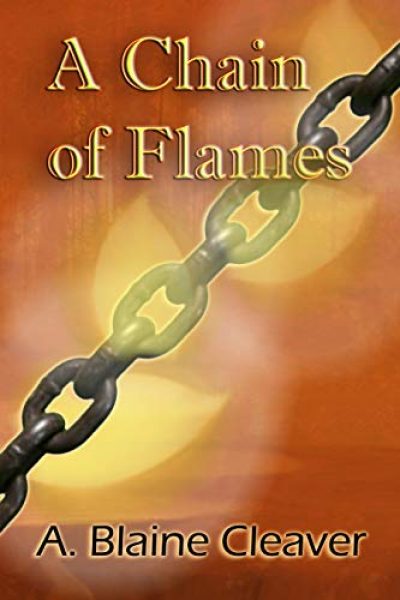 A Chain of Flames by A. Blaine Cleaver

A Chain of Flames is about how different people – some on the front of society and some on the fringe – are able to find their way to something greater . . . despite their disasters, their difficulties or their levels of malcontent.

Eli Rathebohn is a wounded, lost soul. He’s not really living, he merely exists. Just one heartbeat away from ending his life, Eli decides that he’s not going down alone. He’s determined to take an innocent man with him.

Johnny James is a civil servant—just a modest police Chaplain in a mid-sized southwest town. He has no idea that his simple life is about to change so drastically, that he is about to be tossed so deeply into the fray.

Denise Grayhorn, the daughter of an influential tribal leader, may have just ended her own career as a television news anchor. In a last-ditch effort to redeem herself she accepts a meager assignment. But no one knew that her penance would turn into the most sensational news event of the year.

Jared Suina has been raised on a Pueblo in New Mexico. Young and educated, he finds himself caught between his heritage and a yearning for something more. Will he find what he’s searching for? Does it even exist? In the center of two worlds, Jared gains more than he could ever have imagined.

Together these people will come to realize that life is not a single footpath, but a broad interchange. Where souls are linked and mingled, as in a chain of flames.

The author weaves together the lives of his characters in a meaningful way that illustrates the untapped power of faith, redemption, and love. A Chain of Flames shows us how the seemingly small things in life can become grand adventures. If not for ourselves, then for others.

Tony describes himself as a 'refugee' from the city of Flint, Michigan, a place once considered to be the Mecca of America's blue collar workforce; though now, a town whose name has become synonymous with terms like ‘crime,’ ‘poverty,’ ‘urban decay,’ and ‘bad water.’

By the late 1980’s Tony found himself in Oklahoma City, where he was soon to gain a ‘dubious’ honor: he was the highest earning bartender in three states. So his employers would tolerate his propensity for ‘witnessing’ to customers and co-workers from across the bar—on one occasion, even to a professed Satan worshiper, with the consecration scars on his chest to prove it. Tony would tell these people he would encounter about how Jesus could change their lives. For this, he was denied membership at a local church— “Because he fraternized with sinners.”

In the 1990’s in Albuquerque, Tony once had occasion to break traditional 'fry-bread' with a very old Native American couple in their modest pueblo home on the reservation. They talked about religions, about 'hospitality,' and about the priceless thousand year old clay pots that lined on their modest mantle.

In the 2000’s in Indianapolis, Tony went from having no job, no home of his own, and being about $40,000 in debt, to owning a portfolio of investment properties; all within just a few years. Tony continued in his witnessing efforts, speaking to tenants and to the working poor, whom he would help to purchase their very own first homes.

Today Tony and wife Karen live in the Ozark foothills where they continue to seek God's guidance every day. His novel, A Chain of Flames, is about how different people – some on the front of society and some on the fringe – are able to find their way . . . despite their disasters, their difficulties or their levels of malcontent.